Despite this being my third Christmas since moving to Ireland, it is the first I have spent in the company of Irish friends.  The first year was spent with the ex, another expatriate like me, while the second was spent back in Italy with the former in-laws.  This year was shaping up to be most educational! 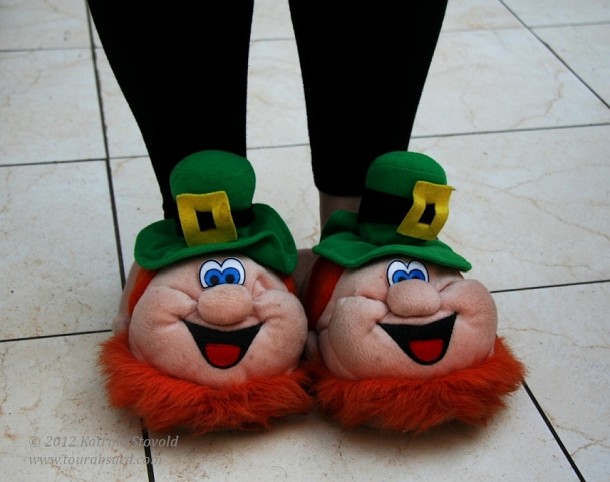 And here I thought it was just Americans who liked these little guys.

First off, despite all the Stephen Colbert and Conan O'Brien stereotypes to the contrary, Ireland is not quite as Catholic as you might think.  Yes, Catholicism pretty thick here, but it's not overwhelming and exclusive.  In many cases, much like Italy, it's more cultural than religious.  Not to mention, this little island is growing more diverse and international all the time.

I am a big fan of spirituality, if not institutionalized religion.  I attend a Unitarian church (oldest continually operating church in Cork!) where the "services" range from history lessons to poetry to pagan sabbats.  One of the usual jokes goes, "Why are Unitarians so bad at singing hymns?  Because they are always reading ahead a line to see if they agree!"  It's a small group, but very friendly.  They've become like family to me and have helped me out in more ways than I can possibly name.  Just lovely, lovely people.  They've continued the trend of loveliness by inviting me to attend their holiday gatherings. 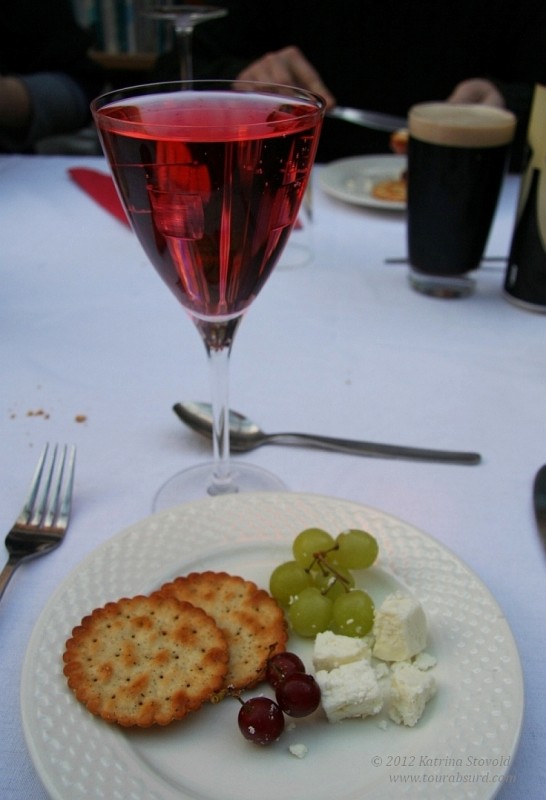 Starter: grapes, cheese, crackers, wine…
and a Murphys in the background so you can still tell it's Ireland.

I'll be honest and say I'm not quite getting a full-on Irish Christmas experience just yet.  I haven't participated in any large family gift exchanges or spent days in a different county with all the relatives.  This year is a more a gentle introduction to the habits, schedule, and food.

One thing that made me giggle were the slippers that my hosts' daughter had on her feet (see first photo).  I thought no self-respecting Irish person would give into the silliness of stereotype.  However, just like St. Patrick's Day, turkey for Christmas dinner, and even potatoes, some things have made their way east across the Atlantic.  That is to say, both leprechauns and St. Patrick's Day were originally Irish, but they emigrated to North America and have returned like Bruce Banner on a bad day – larger than life and extremely green. 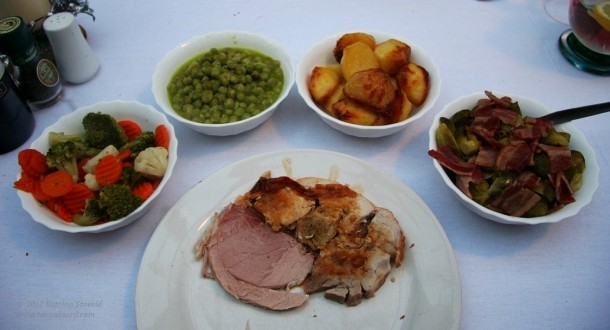 Unlike Italian Christmas food, there are no tentacles involved whatsoever.

One of the really nice things about Irish food is that it is pretty darned familiar.  Goose used to be the standard fowl, but now it's turkey.  There's also ham, veggies, 2-3 forms of potatoes (mashed, roasted, boiled), and Brussels sprouts.  The sprouts seem to be a tradition that no one can put their finger on, but they are always served.  Fortunately for me, I really like them!

Another thing I liked is that there is not course after endless course.  Just a nice little starter, the main meal, and dessert.  Oh, and unlike Italy, it's ok if your food touches on the plate.  You don't need to hire a team of dishwashers to make sure there's enough plateware available to complete the meal.  What a relief!

There really is something to be said for familiarity.  Much as I enjoy living overseas and traveling, sometimes not having your perceptions and expectations challenged is very, very nice.  Yummy, delicious, and familiar – just the way comfort food should be. 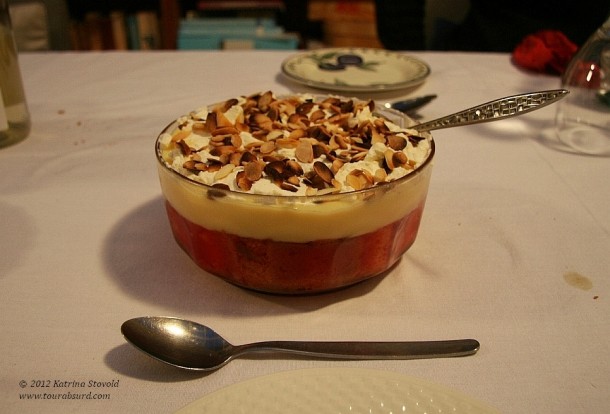 I don't know why there is more than one spoon.  One is all I need, thank you.

For dessert there was a big bowl o' trifle, wee mince pies, Christmas pudding, ice cream, custard, and whipped cream.  I had some of everything.  Naturally.

I don't know why there are not more custard-based desserts on the west coast of the US.  Did all the custard connoisseurs get caught in Wisconsin?  "Sorry, sir.  You'll have to park your wagon here and disembark.  You know the secrets of custard so you will not be permitted to pioneer any further."  You Wisconsin bastards!  *shakes fist*  This situation must be corrected! 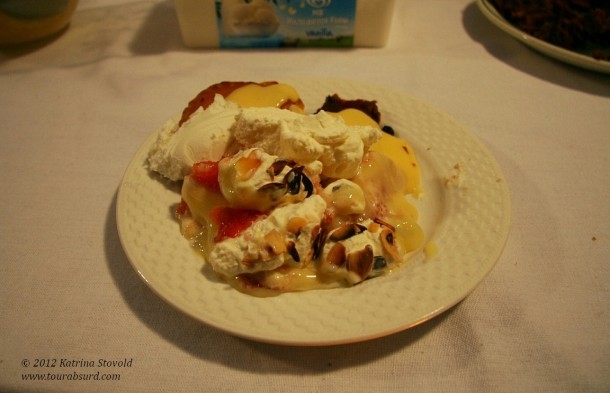 This is what "one of everything plus extra custard and extra cream" looks like.  In short, heaven!

…and then tea and coffee was offered.  No one had any more room and half the party got up to watch the Dr. Who Christmas special.  I gamely chatted away with my hosts for a bit afterward, but eventually requested a wheelbarrow ride home.

The following day (today, as a matter of fact) I sent text messages to several friends asking for a bit of insight into St. Stephen's Day.  In the UK it's called "Boxing Day" and in the US it's "the day you eat leftovers and clean up after your relatives".  Before today, about all I could recall was that Good King Wenceslas went tromping through the cold on the Feast of Stephen. 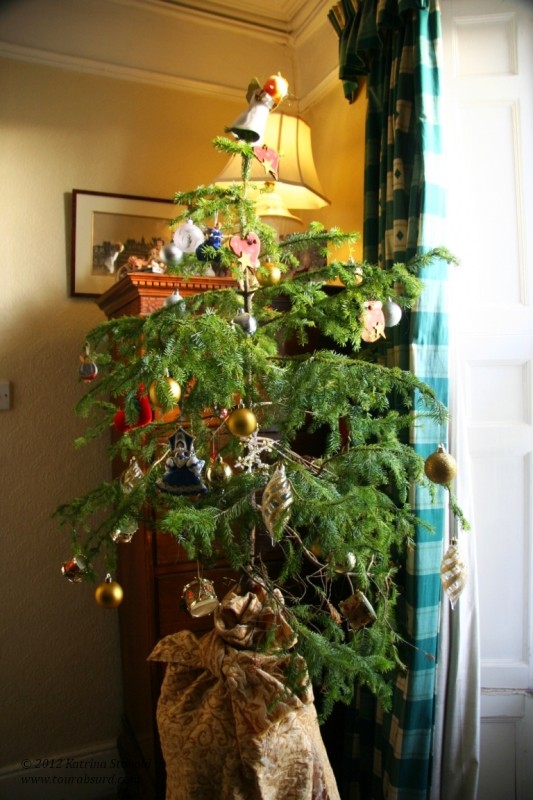 My inquiry was mainly about contemporary habits rather than the origin of the day, but I got a nicely mixed response.  It seems that many families visit primarily with family members on Christmas Day.  On St. Stephen's Day, it's fairly common to spend the time visiting friends and neighbors.

The pubs, closed for Christmas, open up once more and apparently do quite a roaring business.  I cheekily asked one friend if this was because people were trying to drink away the trauma of all that family time.  He said it probably had more to do with the fact that friends you didn't see often would be in town visiting their families and the local pub would be a natural meeting place.

One of the historical bits that came up about Stephen's Day was the "wrenboys" and the Hunting of the Wrens.  The custom is still practiced in parts of County Kerry, but not so much in Cork.  This poor, much maligned bird was said to have given away the hiding place of St. Stephen, leading to his capture and death by stoning.  A tradition evolved wherein a wren was captured, tied to a pole, and paraded about town to the accompaniment of music and requests for money.

Accounts vary as to whether the money was to bury the wren – who was eventually killed or died from the trauma of being paraded around town on the top of a pole – or as a blackmail tactic to spare its life.  (Reminds me of a bank robbery attempt in Canada where the would-be robber threatened to kill a baby raccoon unless he was given lots and lots of money.  …I wonder if he was Irish.)  The money was used to pay for a dance later in the evening.  Today it's often donated to charity.  And fortunately, the wren is now fake. 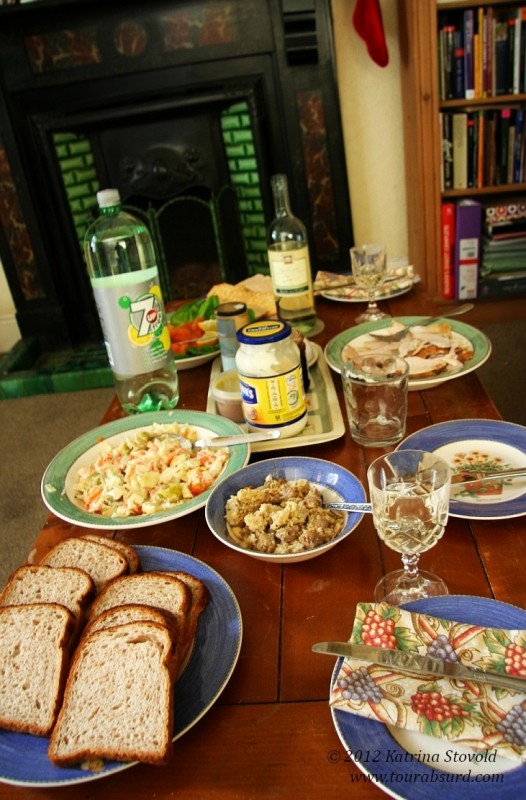 Not having recovered from the previous evening, I proceeded to re-stuff myself.

In addition to providing insight into local habits and traditions, my message was also answered with an invitation.  Two other friends from the Unitarian church asked if I'd care to join them for leftovers and a trip to the beach.  Of course I said yes!

The funny thing is I'm not even sure they were leftovers.  True to form, they'd both been up with family in a different county the night before.  Today's food was served as if sandwiches were the only logical next step, but everything seemed quite fresh.  It was certainly tasty!  Smoked salmon and crackers, turkey sandwiches with cranberry sauce, stuffing, and a salad of Brussels sprouts, carrots, cabbage, and apples.  And yes, there was more dessert: chocolate from Lily O'Briens.  Amazing! 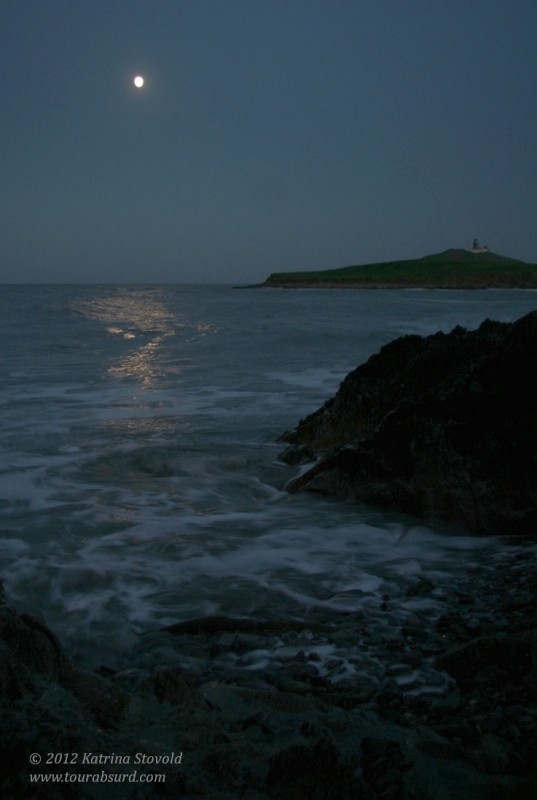 We weren't sure if the weather was going to clear enough to make a trip to the beach worthwhile.  Fortunately, it did and it was.  We took a meandering route to get to our destination – ok, we made a lot of wrong turns – stopping at another beach along the way.  We did eventually arrive at Ballycotton in time to do a quick beach walk as the sun set.  It got dark very quickly, but with a nearly full moon, there were still beautiful photographic opportunities to be had.

We finished off the evening with a quick stop at a pub for some hot drinks.  I'm paying for it now.  Seems that hot port was the straw that broke the camel's stomach.  Woe is me, I say.  Woe is me!

…but was it worth it?  YOU BET!  In fact, I've just received another invitation to spend tomorrow with more of my church buddies.  I'm going for it.  Good food, great company – how could I say no?

Hope your holidays have been filled with love,
warmth, happiness, and stuffing yourself silly! 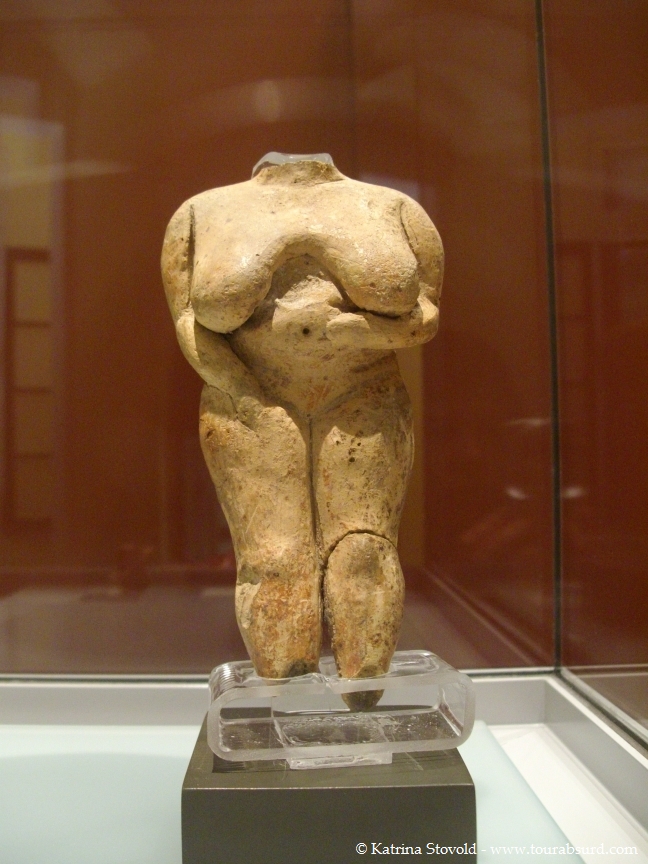 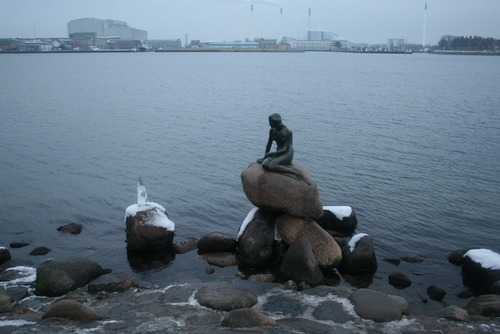