With such an alliterative name, you just know that wacky things are bound to take place.  Seriously, try it on for size: "Kealkill. …Kealkill.  KEALKILL!" (not to be confused will Killkeel in Co. Down!).  Ok, got it?  Now add "castle" to the mix.  That's right.  "Kealkill castle."  And guess what there are lots of in Kealkill?  That's right — cows.  And young cattle are called what?  Right again!  Calves!

But first, let's back up a moment to what captured our curiosity and caused us to curtail our countryside cruising: this sign. 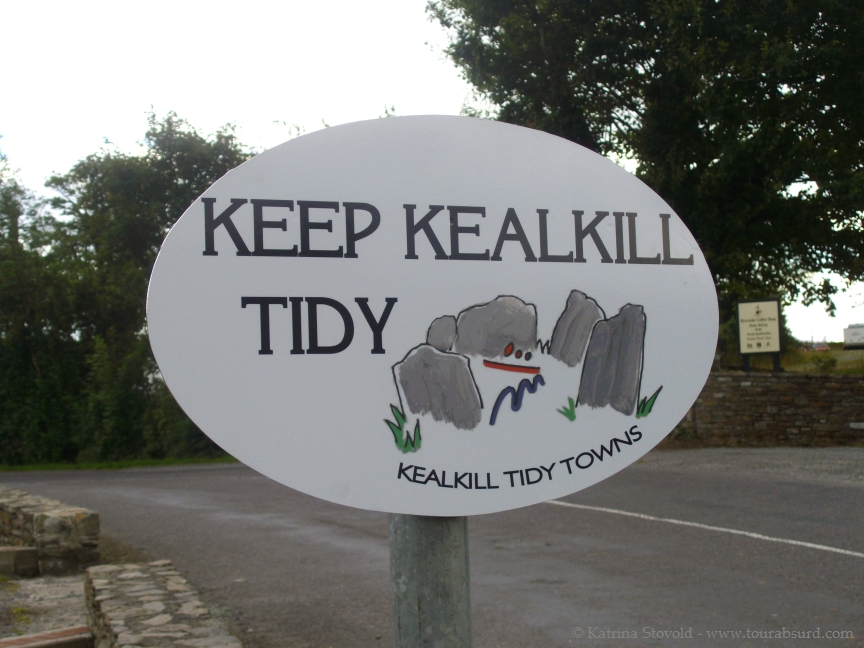 We saw this sign and recognized it as representing the Tidy Towns initiative in Ireland.  As Dario pointed out, however, it was a missed opportunity on the part of the town.  We cannot help but think the sign would have been much more effective had it read, "Keep Kealkill Clean."  (Wouldn't you agree?)

In any case, it amused us so much, we turned around and headed back to take a picture so that you, gentle reader, would be able to share in our mirth.  Originally it was just going to be a featured photo titled, "Missed opportunity."  However, since we'd gone through the trouble to turn around and park, we thought we might as well visit the cute little castle across the road.  We planned to stop for a few moments, grab some nice shots, and continue on our way to the Beara Peninsula. 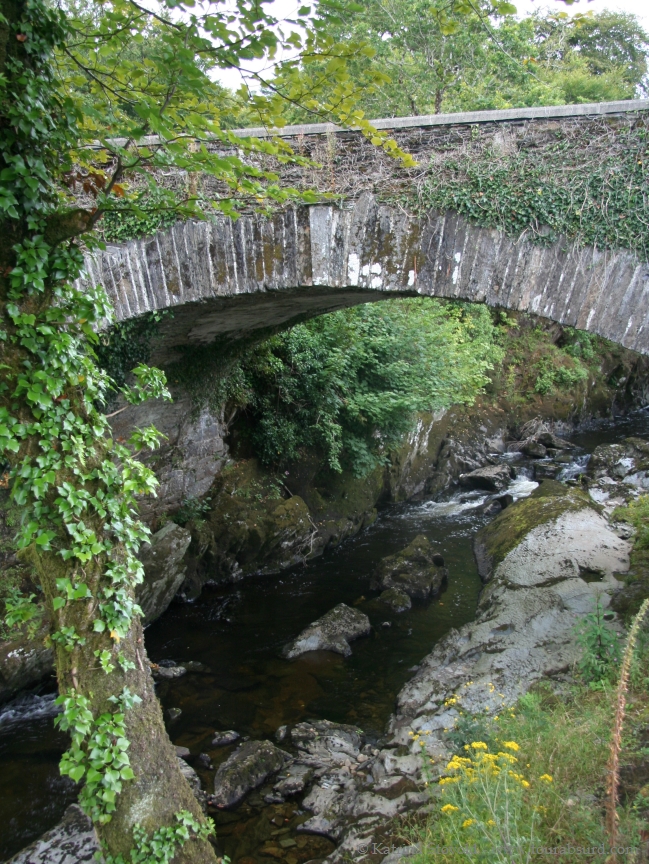 We enjoyed reading about the very dramatic history of the wee castle, as explained on some informative plaques near the gate.  For instance, "The castle is built on a rock outcrop on the north bank of the Ouvane River which flows west into Bantry Bay at Ballylickey 3 miles away."  Riveting, no?

Well, it was worth it just to see the name of one of my favorite Irish towns in print again: Ballylickey!

Really, though, there was quite a lot of drama, as evidenced by a poem which "…tells the story of how Donal Cam got vengeance for the death of his wife."  This is the vow he made at her grave:

No food, no rest shall Donal know
Until he lays thy murderer low
Until each severed quivering limb
in its own lustful blood shall swim.

Gosh, sounds pretty serious!  (For the exciting conclusion, you can take a peek at the sign by clicking here.) 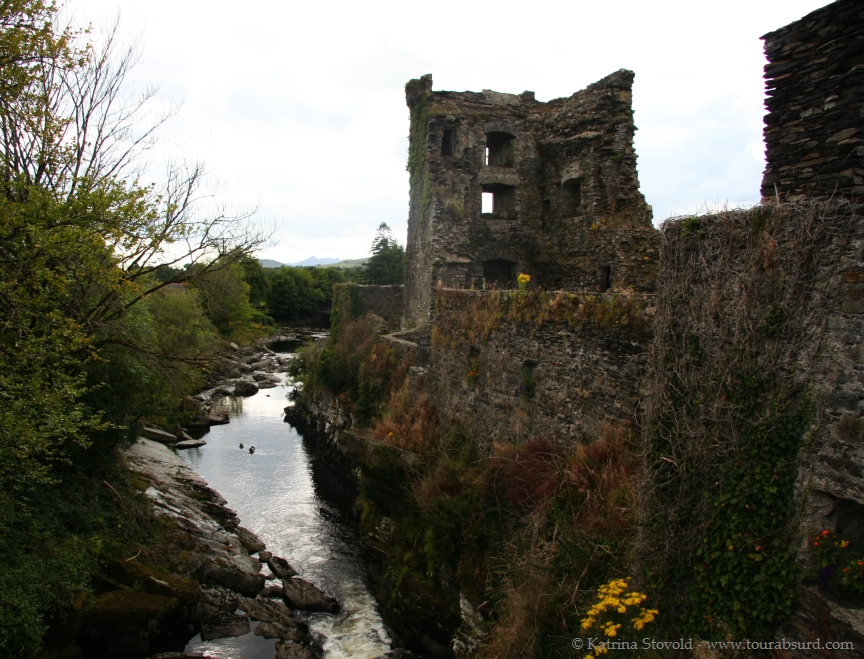 Upon entering the gates, a rather modern affair comprised of two hinged doors set into the original stone, we looked around and found it to be a small, but well tended place.  (Dare I say…  tidy?)  A recently built structure had modern tables and chairs inside.  We speculated that it was used for community gatherings or fundraisers.  It was closed and locked, but there was a picnic table in the courtyard.  I took a few unsatisfactory shots trying to adjust for angles, avoiding modern signage, and hoping some of the color would come out despite the glare of the overcast day and my lack of expertise at fiddling with manual settings. 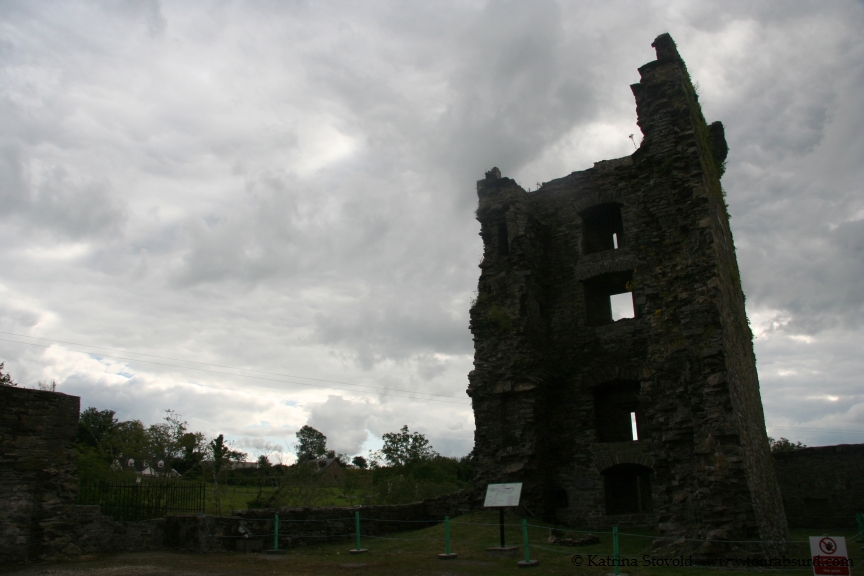 I decided to switch over to the wide angle lens, which has a polarizing filter, to see if I could coax anything more interesting out of the scene.  I set camera bag and other gear on the picnic table.  I could see some dirt as I looked through the camera and wasn't sure if it was on the lens or just the viewfinder, so set about cleaning it up.  When I'd just gotten to the part where I removed my go-to 17-85mm lens, I heard the noise of someone else entering the courtyard.  I figured I'd look up and greet them after finishing the delicate business of switching to the wide angle.  Then I heard Dario's voice calling my name in a soft tone.

I looked at him, frowning.  He was looking toward the castle.  I followed his gaze and, for a moment, the scene failed to register. 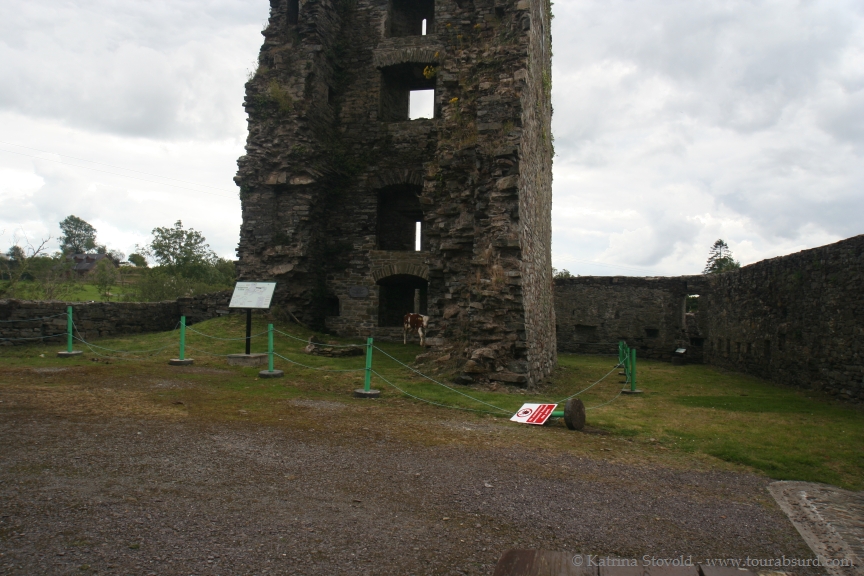 Oh, sure, he looks friendly NOW, but you should have seen the bloodlust in his eyes!

All right, so not a full-grown bovine, as such, but a young bull calf.  He was a bit disoriented, and, in his confusion, had some run-ins with the the ropes around the base of the tower.  I don't think it was intentional, but the pictures sure made it look like he was attempting to vanquish his Evil Nemesis: SIGNPOST! 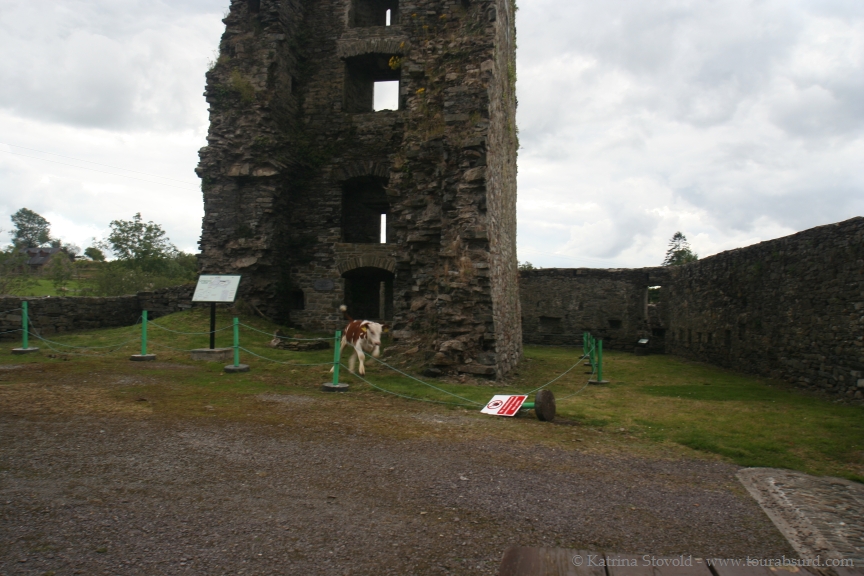 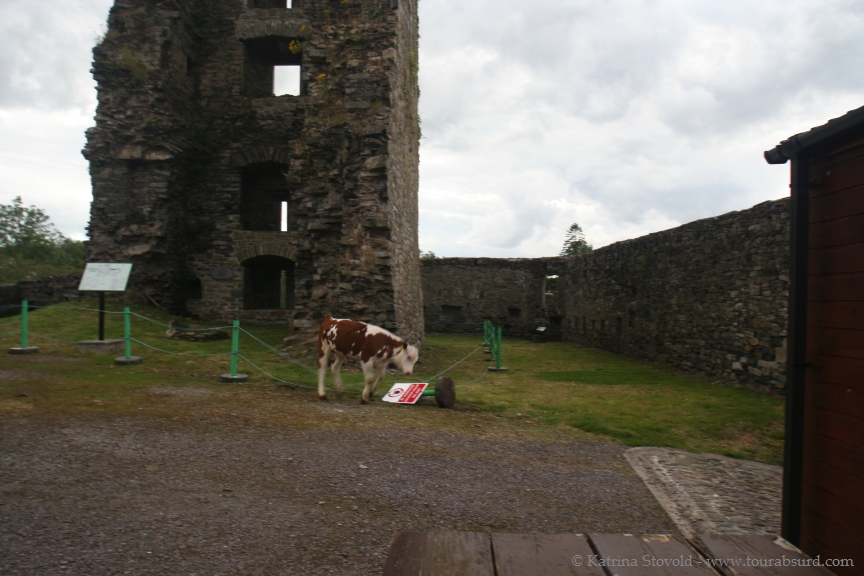 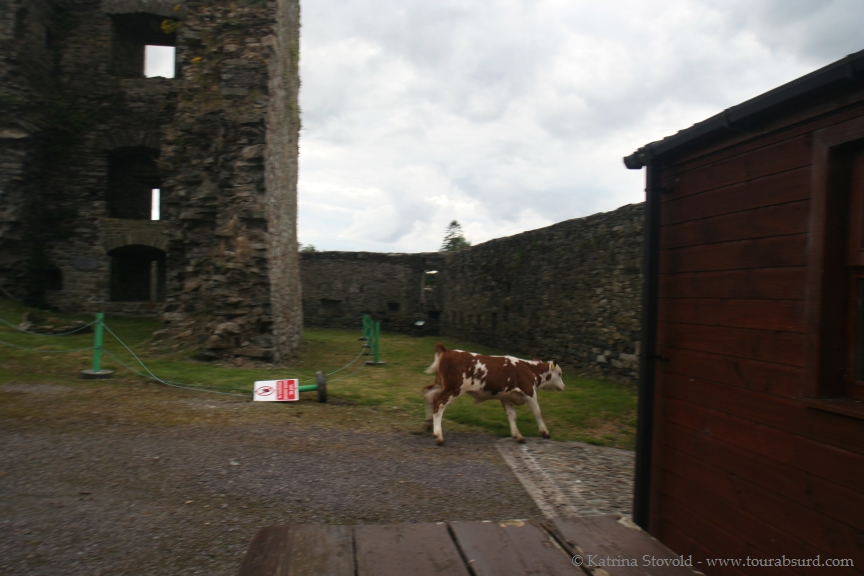 "And now I must away to wreak vengeance on all the other signposts of the world!"

Signposts of the world take note: YOUR DAYS ARE NUMBERED!

After my somewhat shocked photo-taking, I told Dario to get out.  I knew he wasn't particularly familiar with the behavior of farm animals.  I was more used to horses than cattle, but had spent a couple of summers in North Carolina and Virginia with family on their farms.  (Where I was nearly run over by a very angry and possibly demented cow, I might add.  So I'm not sure why I was feeling so brave…)  I was concerned that the sign-conquering little guy would end up out on the road and be in danger of getting hit by a car.  I instructed Dario to put my camera away while I kept an eye on the calf and made sure he didn't run out of the gates.  I didn't know if we could close them, but I was hoping so.

Dario made his way to the gates and determined that yes, they could be closed, so he set about doing it.  The calf charged around a bit, tussling with the ropes and posts a few more times, but when he neared the gate, I shooed him away, yelling and waving my arms.  Dario got the gate nearly closed and I slipped through.

Me, laughing: "I guess I'll take my camera and go see if I can find a neighbor to notify."

I went in search of someone to tell, praying to the Camera Gods that my faithful lil' Digital Rebel would still be in one piece when I returned.  I suppose I could have slipped back in to get it, but I was pretty sure it would be ok.  (Spoiler: it was.)

The first neighbor was not home.  I started to walk toward another house down the road a bit and saw some folks parked by the river.  Something about them said "German tourist" but I couldn't put my finger on it.  But hey, Ireland is getting darned international these days, so they could have been expat residents like myself.  I sallied bravely forth.

"Are you from around here?  Well, you see, I was just in the castle and this calf came running in, and we locked the gate — no worries there! — but we are trying to find the owner."  Was that a slight raising of the eyebrows I detected?  Eyes darting to look at friend's face?  A slight smirk?  "…No?  Nuthin?  Ok, thanks!"  Cheery wave.

The second neighbor, an older lady named Angela, was home and quite a bit more sympathetic than the alleged Germans.  I explained that we had seen no broken fences, nor agitated farmers, nearby, and that the calf was red and white.  The last was important because all the surrounding herds were black and white, probably Friesians, a popular dairy breed.  She promised to make a few phone calls immediately.

I strode off back to the castle to retrieve both my camera and my husband.  I passed the doubtful Deutschlanders and shouted cheerily, "So, yeah…  don't go in the castle right now!"  Wave, grin.  Further frowns and, I imagined as I turned away, head shakes followed. 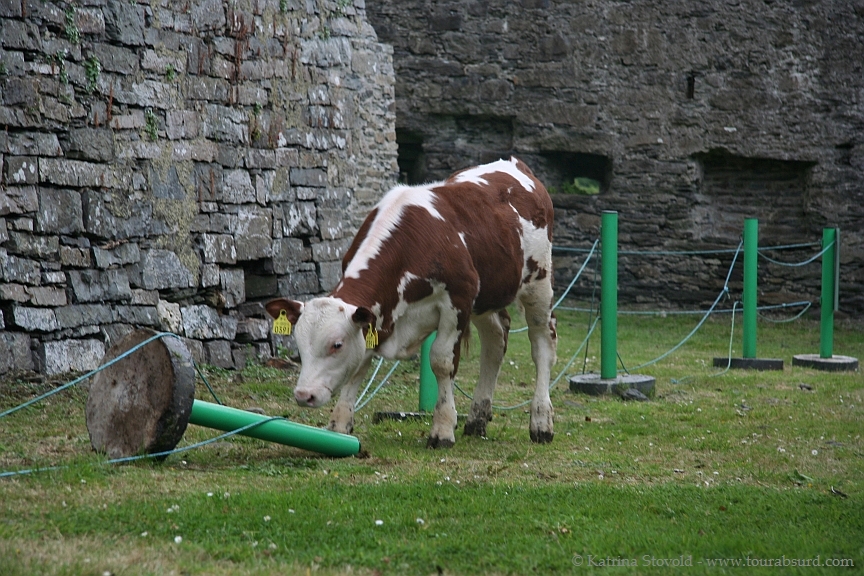 "I weep for your death, signpost, for you were a worthy foe!"

Angela had inquired whether or not we'd noticed the number on the calf's ear tags or head tags or something.  Only I don't think the term was "head tag."  It was something much more …farmer-y.

In any case, I had to get my camera, so I snuck back in the gate, grabbed my gear, snapped a few more pics to try to get the tag number, and slipped back out.  Angela was just stepping out of a car driven by a younger woman as I exited.  I gave her the number off the tags and she peeked through the gate.

"He seems a bit wild."  I nodded.  "You must know about animals."  I smiled and mentioned the horses and the summers on the cattle farms.  "Good thing it was you and not someone who was frightened of animals."  I smiled even bigger.  Yay for me and quick thinking!

We checked the gate to make sure it was as secure as we could get it, said goodbye to Angela, and set off toward the car.  As we crossed the cute little bridge, we heard the calf calling out to any who would listen.  His cry seemed to say, "I am Calf, Slayer of Signs and Master of the castle!  Let the posts of the world know that I am coming.  Hear my mighty lowing and tremble in thy boots!"

Dario and I looked at each other and giggled.  "Heehee!  We locked a calf in a castle today.  Heeheeheeheeee…"

My aunt, the one I visited in North Carolina, has a PhD in animal nutrition and teaches at North Carolina State University.  I sent her a few pictures of the calf because I was curious about his age, breed, and circumstances.  I suspected he may be of the Simmental breed, and she agreed this was a good possibility.  As for his age, she thinks around 7 months, which is a common age for weaning.  That could explain why he was disoriented, agitated, and in a position to escape (possibly while being moved to another location).

I realized after we were about 10 minutes away that I had missed a golden opportunity to take a picture of Dario doing something epic while wearing his Tripping.com shirt, which we had just received in the mail that morning.  (Our contest photo from later that day down on Beara is pretty excellent, though!  Voting opens Sept. 12 so be ready!)  Being a good sport, Dario once more turned the car around.  By the time we returned to the castle, however, the calf was gone, the signposts restored, and the gates propped open once more.  Alas, a missed opportunity of our own!  However, we were relieved to see that the local communication network functioned so well and that the young bull was back on his farm, not running wildly down the road.

Finally, I have a Kealkill kind of confession to cop to: despite its location, the proper name of the castle is not "Kealkill."  It's called Carriganass Castle.  But really — that's even funnier.

What epic madcappery have you gotten up to on your travels?

19 thoughts on “Capture the Calf!”