Have you heard the story of the Irish guy in Abu Dhabi who took his cab driver with him into a theme park? It's been getting a lot of press. (You can find various versions of the story here, here, and here.) Yet, for all that it seems a "wonderful" and "generous" gesture, the language Mr. Generous Irishman uses to describe his companion is …off.

Look, I know – really KNOW – that there are all kinds of different expressions that carry subtle undertones and meanings when we talk. I've had this particular conversation with many an expat, lots of locals, and countless CouchSurfers. It's why some of us don't want to date people from our own cultures – too much unspoken baggage, loads of weird expectations – and why, conversely, some of us only feel comfortable dating within our culture – convenient shorthand, no need to constantly explain, yadda yadda. I get that, despite having lived in Ireland for 5 years now, there is still so much that I utterly fail to grasp about local expressions and turns of phrase. (Just had to have a Father Ted reference explained to me the other day, matter of fact.)

And yet, there are still some things that seem to be universal. One of those is the language of privilege. 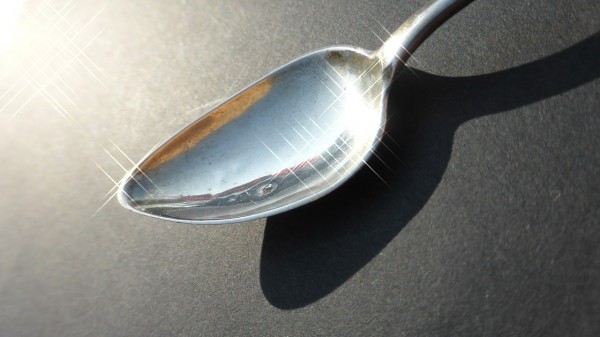 This spoon is shiny. It may even be silver.

For the uninitiated, privilege is "…a set of unearned benefits given to people who fit into a specific social group." It works kind of like being a fish in water. Is the fish aware of the water? No, it's just the natural order of things! But those outside of the water can see it.

I am reminded of Ayngelina's post from many years ago about North Americans buying Christmas turkeys in Ecuador, something that, in local currency translated to $300-500. Or Gloria Atanmo's recent article, "7 Privileges I Was Made Aware of By Traveling". Or Everydayfeminism's post, "How To Talk About Privilege To Someone Who Doesn’t Know What That Is."

Much of this is in the front of my mind because I'm finishing up my MA thesis and it's all about equality, diversity, inclusion, and all those social justice warrior things (proud to be a SJW). This, and my tendency to speak up whenever I notice an injustice (or grammatical error), led me to comment on a Facebook page's post linking, yet again, to the story of the Generous Irishman. 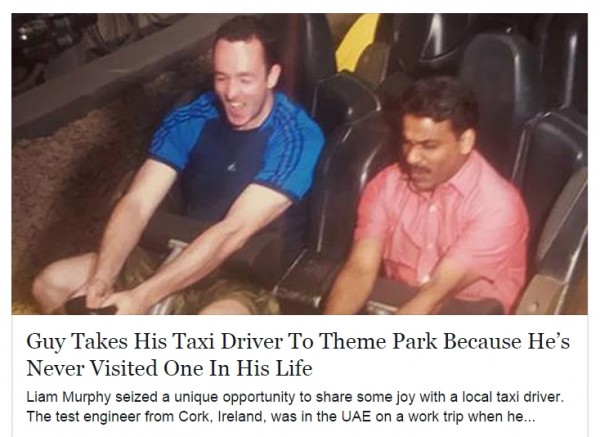 Dude on the right does not look to be enjoying himself. Just sayin'.

Aside from the ambiguity of the headline – who never visited a theme park in his life? "guy" or his taxi driver? – the quotes from Generous Irishman are troubling:

"He was great entertainment."
"Today I made his dreams come true for the laugh."
…or the one that really got one of my friends riled, "I bought him some pizza on the way home."

(The last may not resonate with you if you're not already on board with the whole White People Are Often Condescending To Brown People thing. My friend is a self-described "brown person" and knows this very well.)

Basically, it seems that Generous Irish Guy thinks he bestowed a fabulous gift upon Poor, Underprivileged Indian Guy. It may be that in person he treated him with nothing but respect and dignity. I hope so. In speaking about it afterwards, though, he doesn't manage to convey that. Phrases which could have led me to think differently might have been, "We had a great time together," or "He told me it was his dream come true, and we had a laugh," or "We went out for pizza on the way home." It's the "we" thing that matters. Basically, communicating that he saw them as equals.

"Y'know, for all the positive feels this story is getting, white dude
sure talks with a lot of privileged condescension in his tone."

As of this writing, the 'like' count on that comment is 76. Now, this is not to say that numbers demonstrate moral superiority. Goodness knows how many times self-righteous people have banded together to commit horrible atrocities and felt safe doing so because of their numbers. So I'm not saying those likes prove my point, because they don't. They do, however, demonstrate that at least some folks felt a similar level of discomfort in reading the article.

What prompted me to write this post, though, were the comments objecting to my interpretation, or attempting to discredit my opinion through various fallacies, particularly folks who claimed I know nothing about Ireland. (See fab list of fallacies here, on the ever-enlightening Wikipedia: List of fallacies.) Just call me Jon Snow!

In fairness, the first reply to my comment was, "Agree. 'He was great entertainment' … Hmmm."

There was also, "I'm pretty sure you can't read tone," with a link to Key & Peele's Text Message Confusion (hilarious, by the way, and something I often consider when sending text messages and emails). It's a good point, but in this case, I don't think it applies.

Oh, and a picture of Thumper from Bambi with the words, "If you can't say nuffin' nice, don't say nuffin' at all." Because, as we all know, not talking about problems makes them go away. Also, 1942 manners translate in every way to contemporary life.

But the crux of it is those trying to educate me about How Irish People Are. (Related: all Irish people are the same. Obvs.)

"He's Irish! He's not trying to be condescending it's just how Irish people talk…" This one also went on to include a definition of "for the craic" – "pronounced crack for those of you that are unfamiliar with Irish dialect" – because she's clearly an expert on linguistics. Also, she's from the UK. Carry that thought as far as you will.

"Seriously he had a laugh with the guy is all that means!! This dude is Irish! They know all about being treated as 3rd class citizens…" Ah! So once your group has experienced any type of oppression, you are automatically endowed with intrinsic knowledge about the dynamics of such. Alas, no. See Israel oppressing Palestine, men of colour oppressing women, and the gay community oppressing bisexuals for examples. No, not everyone does this, but neither does an experience of oppression confer a magical immunity from inflicting it on others.

Oh, and there's this gem: "Ever been to Ireland Katrina,? Lovely country, full of fiendly hospitable folk. They are also famed for their Guinness, dancing and frivolity, oh and LUCKY LEPRECHAUNS [smile emoticon] This man's actions were human kindness." OK, the leprechaun thing was likely said out of irony (I hope), and the smiley face surely means they just want a friendly discussion (in this case, it probably does), but… Y U keep talking to me like I know nothing about Ireland?

I was actually in quite a merry mood and found myself laughing at how obtuse some of the trolling attempts were. I must admit, I came up with numerous counter-trolling comments in my head. The neighbours must have thought me mad as I walked my dog, chuckling out loud at these thoughts. I only typed one reply, however. It wasn't especially clever or witty or even filled with calm, reasoned finesse.

"Guess what? I live in Ireland. Getting a Master's degree;
research area is building diversity and inclusion into media production,
which means many long hours poring over publications
that discuss how we talk about privilege and oppression."

…which, of course, prompted a few more comments attempting to invalidate my opinion. Now, I know I didn't use any emoticons or spend as much time crafting the tone and intent of this statement as I could have. Indeed, I spent more time laughing over potentially smart-arse responses than I did in actually typing up a serious one. So yes, I know this could be taken as snarky, entitled, self-righteous, ad infinitum. For what it's worth, I was going for, "Yo. I live here, so yes, I am somewhat familiar with the vernacular. Also, this stood out to me because of how much attention I've been paying to the issues of imbalance and iniquity, so I just wanted to say something." Of course, in polemic ol' Internet-land, that would likely have been largely ignored and/or ridiculed, anyway. *shrug*

Here's the thing: random acts of kindness totally rock. They do, they really do. I love performing them and I love being on the receiving end of such gestures. I love free hugs, I love gift economies, I love that story about the guy throwing stranded starfish back into the sea. (Like, you have no idea how much I love that story – it's one of my all time faves. I think it's by Loren Eiseley. Read it here.) That doesn't mean the dynamics of some of these gestures aren't worth examining.

I have definitely benefited from the social and financial inequality of international economics. I could not have spent six weeks in India if the cost of living was the same as Norway, or even the US. I couldn't have ridden camels in Morocco or spent weeks there – twice! – or hired a guy to drive me and my friend around. I couldn't have visited any number of countries – or even started this journey of travel blogging – if I hadn't been making a ridiculous amount of money as a contractor for the US military. I enjoyed the hell out of myself, I had adventures, learned loads (including how to be a better global citizen – I hope), and made friends. But a lot of it was based on the suffering and lack of opportunity of others.

There are ways we can address this.

Many great organisations are doing fantastic work to address global poverty (do a quick search for "how to help global poverty" in your favourite search engine). But on an individual level, we can also throw stranded starfish back into the sea, so to speak, by simply raising our awareness of such issues and being mindful of how we speak.

I make mistakes all the damned time. I'm constantly drawing parallels, noticing similarities and differences (heuristics and stuff), and making (sometimes inappropriate) jokes about stereotypes, American chief among them. Yet beneath it all, I'm working to learn more about how to treat people with respect, while also maintaining my own sense of self. It's time consuming, my thoughts get tied up in knots, and emotionally I sometimes get wrapped around the axle, as they say. The growth process is never-ending – which is both punishment and reward. You may not want to invest as much time and attention into this as I do, but a little bit is sure to help.

Before I forget, in case the title of this post is confusing, it's based on the "Do you even lift, bro?" meme. The phrase "Do you even __, bro?" has evolved to include things like, "do you even eat", "do you even science", "read", "live chat", and numerous others. I find it it funniest when nouns are wrestled into the blank and made to do their memely duty as verbs.

I'm only telling you this because I want to post a picture of my actual bro who does, in fact, lift. A lot. He's worked as a personal trainer, bro. In the interest of privacy, however, I have replaced his face with that of Hoa Hakananai'a, the moai residing at the British Museum. 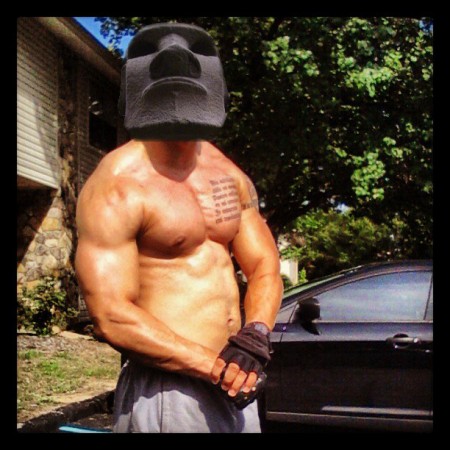 I didn't ask permission to post this. Family are the worst. The WORST!

Because it's always good to end an intellectual discussion on a high note, I'll stop there. I wish you well on your travels, both worldly and internal. And remember, let's all try to be nice to each other. [smile emoticon]

4 thoughts on “Do you even Ireland, bro?”