Think you know the nature of divinity?  Think again!

Hanuman, also known as Maruti, is the Hindu monkey god.  He is known as the remover of obstacles.  AND he has a sense of humour! 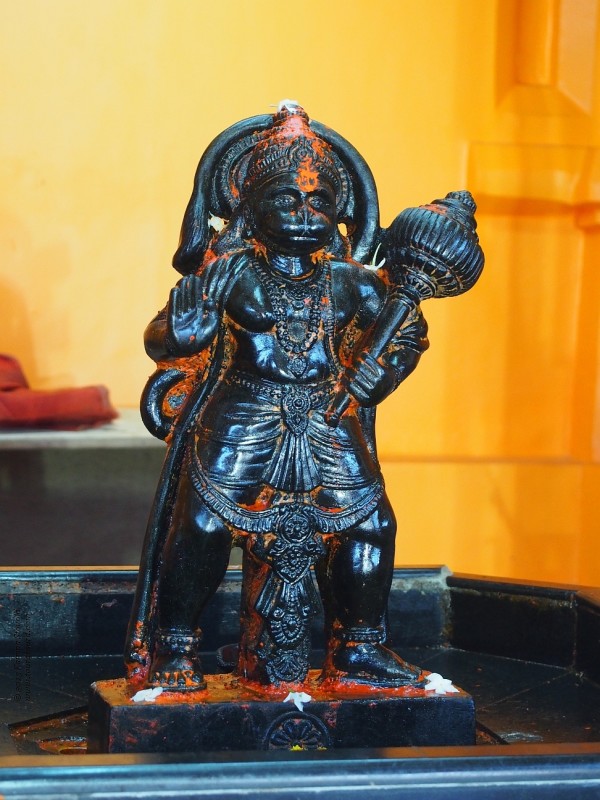 You'd think that with a website with the name "TourAbsurd", and the inherent comedy potential of monkeys, that I'd have something smart-mouthed or silly to say.  But I really love Hanuman.  I was honored to visit one of his temples here in Panaji (also known as Panjim) today.

Many years ago Ram Dass, an American spiritual teacher, told a story about Hanuman.  Ram is one of the many names for god.  Some pesky human or other was telling Hanuman that there was NO WAY he could have god inside him, seeing as how he was just a monkey.  Hanuman, being a bit of a trickster, as would befit his earthly form, disagreed.  He pulled open his skin and muscles to show this fellow that he did, indeed, have god inside him.  All over his ribs was written, "Ram Ram Ram Ram Ram…"  Hahahahaha!

I've only been in India for 5 days now, but have already had some rich experiences.  I've visited the Gandhi Museum in Mumbai, taken a 12 hour train ride down to Goa, and have visited one of Hanuman's temples.  I've eaten some great food, some mediocre, but nothing awful (some of the best was at train stations!).  I've ridden in taxis and rickshaws, hoofed it through throngs of art festival goers, and even stumbled into an Irish pub!  People have been wonderful and gentle, rude and abrupt, greedy or generous.  As for myself, I've been delighted, happy, sleepy, frustrated, patient, touched, and curious.  It's all quite variable and lovely.  Looking forward to the rest of the journey!

Special thanks to Flight Network for getting me here
and to Olympus UK for lending me a nice camera. :)