Have bunches and bunches going on, but couldn’t resist throwing together post about the breath of fresh air I got last week.  Linda of Islandmomma and I went whale watching down in Baltimore, Co. Cork, Ireland, with Whale Watch West Cork!  We went as regular, run of the mill schlubs, not as the rock star travel bloggers that we are (HA!), so I am putting this post up with absolutely no sense of obligation or guilt whatsoever.  I just really enjoyed the trip. 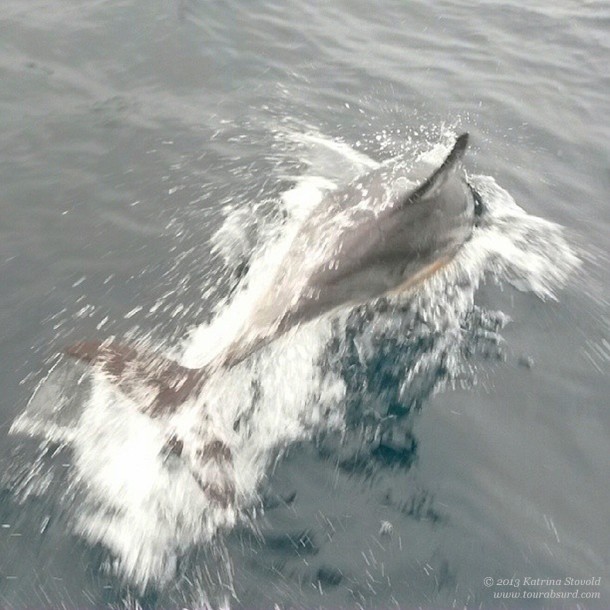 Why hello there, my lovely!

We started with a little road trip to Kinsale for breakfast, then headed down the coast for scenery and green.  At one stop, I noticed a dog in poor condition wandering down the road.  Sweet gal had a sad look about her and some serious skin issues.  I feared it was mange. 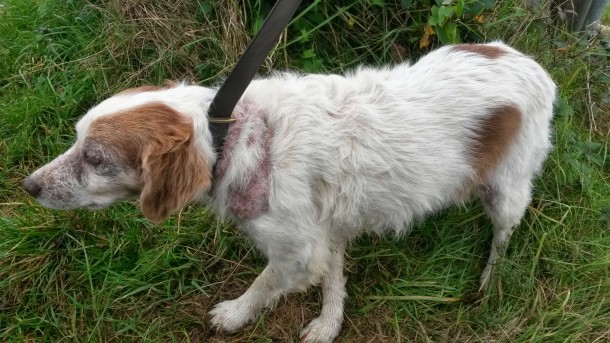 She came when I called, the dear.  Had half a breakfast sandwich in the boot and gave her some bacon and sausage.  The only leash-like thing I had was my belt, so we put that on her to get her into the car.  It was a close call, but I managed to keep my trousers from dropping in the shuffle.

I desperately rang a few friends who work with the Dog Action Welfare Group (D.A.W.G. – I love wordplay!) to see if there were any vets or fosterers nearby.  They put me in touch with the West Cork Animal Welfare Group (not as pithy an anagram, I’m afraid).  Fortunately, they had room and were nearby.  Dropped off the sweet doggy and made a donation, then headed out.

As usual, clicking on a photo will bring up a larger and crisper version! 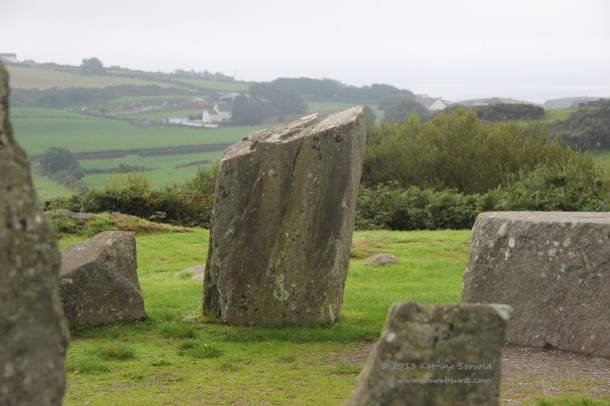 We had a choice of eating lunch before getting on the boat or stopping to see Drombeg.  We opted for the stone circle.  I’m glad, because I really, really like visiting! 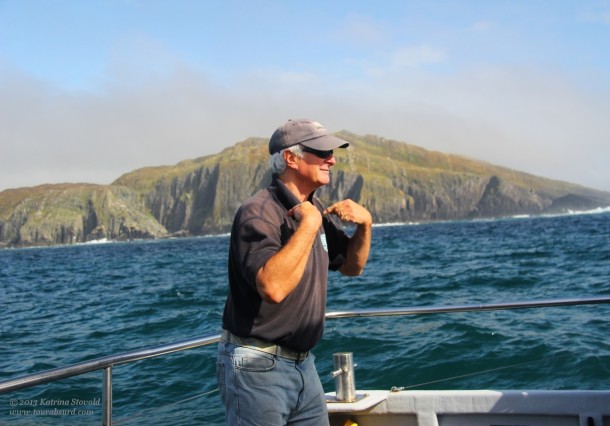 We made it to Baltimore at exactly the right hour: time to park, use the facilities, and hop on the boat.  I had hoped for a chance to grab some snacks, but a fussy flusher prevented that.  Alas!

Our captain was Nic Slocum, a zoologist by training, and grandson (or great grand nephew …or something; definitely related, anyhow!) of Joshua Slocum, the first person to circumnavigate the globe solo.  Our vessel was a catamaran, and her crew complement was two: Nic and his assistant, Sara(h).  The ship’s name is Voyager, which, as a geek, made me smile.  I tried not to think too hard about what happened to the crew of Captain Janeway’s like-named ship. 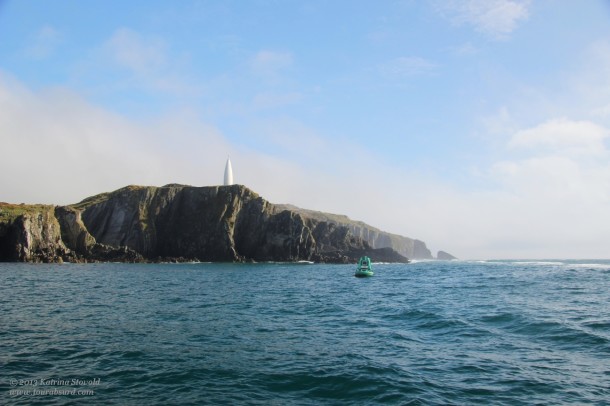 The Baltimore Beacon, warning people that this is not, in fact, Maryland.

The weather had been a bit autumnal of late, which often meant gray and wet, not to mention unpredictable.  Despite our original plans to attend the morning outing (trips run twice a day), we were advised to come for the afternoon instead, as the week had been full of mist and fog.  It was blue and sunny near shore, but a bit ominous over the water.  We hoped things would clear, but the second part of the trip was rather monochrome. 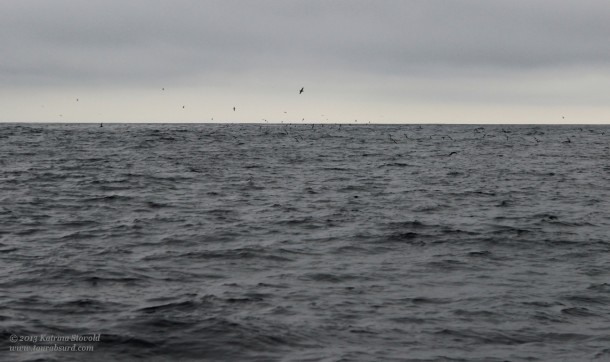 This flock of seagulls is not showing us rockin’ hairstyles;
rather, they are pointing out where whales are making a fuss amongst the fish.

Unlike the Gray whales I was used to watching off the coast of California, Minke whales don’t usually give themselves away by telltale plumes.  Instead, flocks of sea birds of various sorts are the best indicator that something is afoot.  Or afluke, as the case may be.  Baleen whales are filter feeders that follow around schools of fish, krill, and other small critters.  Their presence tends to stir up the waters enough that it’s easy pickings for our feathered friends. 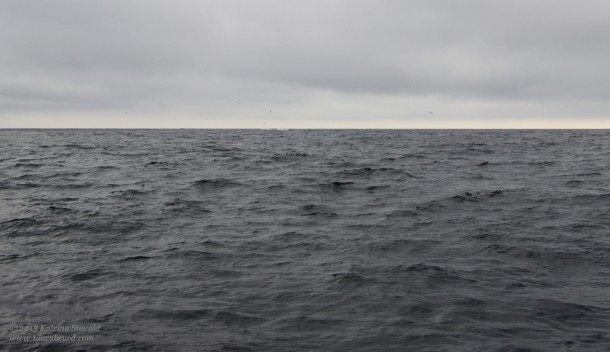 That, my friends, is the mighty Minke!

We saw a couple of very active Minke whales in the distance.  They kept zooming from left to right, coming up at odd times, and were generally elusive.  We weren’t even sure if it was one or two animals for a while there.  The sea was rough, making it even more difficult to be sure of what we were seeing. 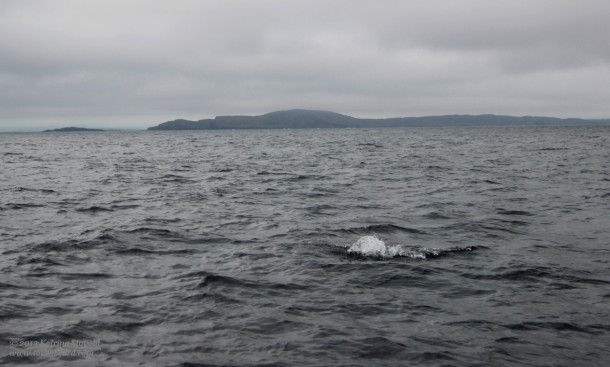 Dr. Frederick Frankenstein: Why are you talking that way?
Igor: I thought you wanted to.

Nic’s sharp eyes, loud voice, and talented pointing finger kept us focused on the action as speculation flew.  “THERE!” he would shout as a far off splash would break the surface.  I kept expecting to hear, “There, wolf!  There, castle!”, but Mel Brooks was not aboard that day. 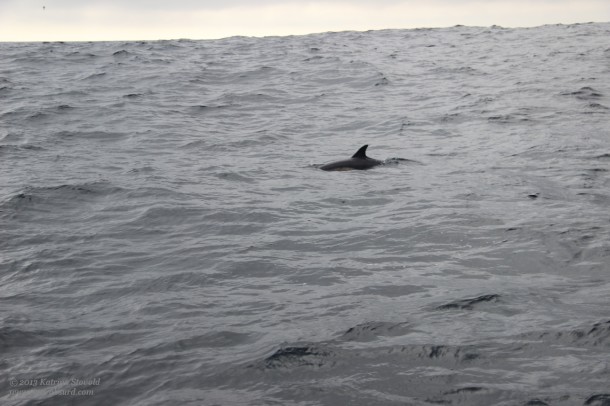 As you can see from the above picture, the swells were pretty big.  Linda had wisely suggested we purchase some anti-motion sickness medicine before setting off.  I was a bit sleepy, but sleepy is ever so much better than nauseated.  One fellow on the boat was not so lucky.

In any case, about the time we thought we’d lost sight of the Minkes, fins started breaking the surface and splashing could be heard.  We hoped that perhaps other whales were in the area and had just shown up for the party.  I was busy fumbling between cell phone camera and camera-camera, trying to keep my balance, and also maintain a view of the water in case a whale surfaced nearby.  I heard a few more “THERE!”s shouted, but sensed there was a bit of confusion. 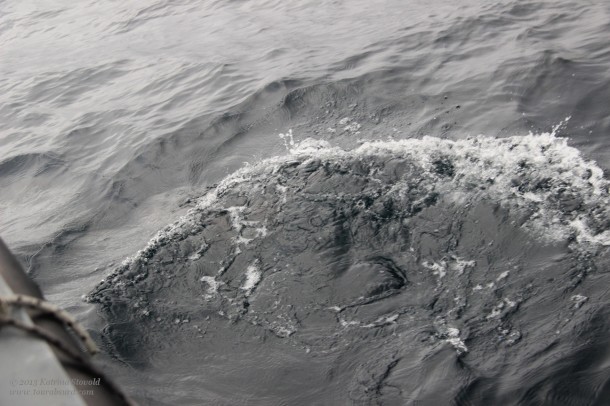 Now, being a clever reader, I suspect you already know what it was.  The post title is a bit of a giveaway, too, I imagine.  But just in case you want some genuine, visual, moving and mit sound type of evidence, feast your squinties on this!

Can’t see the video?  Watch it on YouTube: http://youtu.be/t5IHmY9tSaI

Yes, it was dolphins!  Common short-beaked dolphins, to be precise.  Yet they were anything but common – they were magical.  As engrossed in my camera as I was, I could sense grins all around.  Linda didn’t even bother with a camera, having realized that some moments are best simply experienced rather than blogged.  I, however, had been away from my own blog for so long that I was riding the dual waves of photo happiness and bliss from being so close to such beautiful creatures.  They played around the bow of the catamaran for a good long time and I felt blessed. 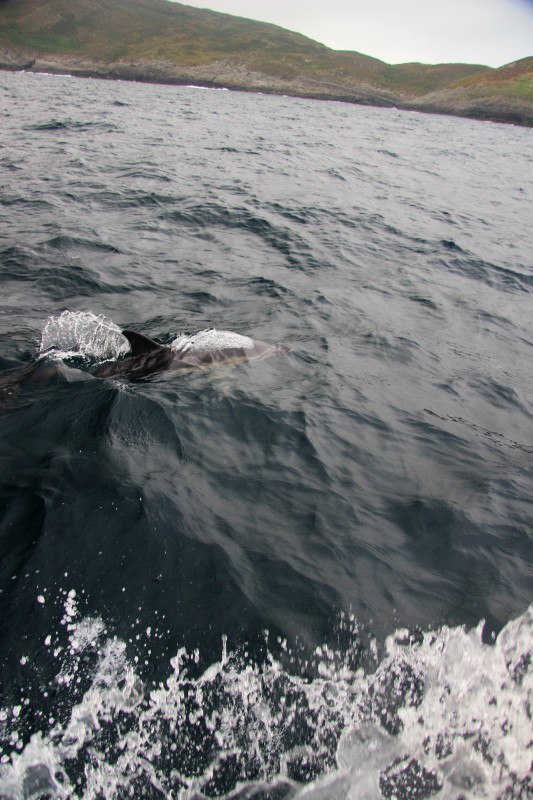 I somehow decided that showing the dolphins with the Irish coastline behind them would be THE BESTEST THING EVER!  I wasn’t exactly in a great position to do this, but I was determined to try.  My camera case flopped in the way, a guy with a lens bigger than me kept losing his balance and repeatedly trod on my toes, and the dolphins seemed to surface just as we hit swells that took them out of my view.  But I still managed to get a few snaps, so I am content.  :)

The day in summary:

Glad I got a bit of video so I know it was real and they really were that close.  Happy sigh.

ps: the doggy has been reunited with her family.  WCAWG assures me that they are good folks.  :)