I don't know what's come over Dario and me lately, but we've been working so hard that we are still as pale and nerdly as when we had office jobs in Ireland.  Lots of great things are developing, but sometimes we have to remember to stop and take a breath.  Thursday was one of those days.  I started out a bit cranky and jaded, but the fresh air off the lake and the time away from the computer worked wonders.

We'd packed part of a lunch, but grabbed some supplementary victuals at a convenience store that turned out to be not very convenient after all.  I don't know if things were just different when we lived in Naples, or if this is a reflection of what's going on in the Eurozone, but it's getting more and more difficult to find small shops and gas stations that accept debit cards.  They want cash, the line is down, or they can't use cards with microchips – you know, the standard form of debit cards in Europe for, oh, at least the past 5 years or so.  WTH, Italy? 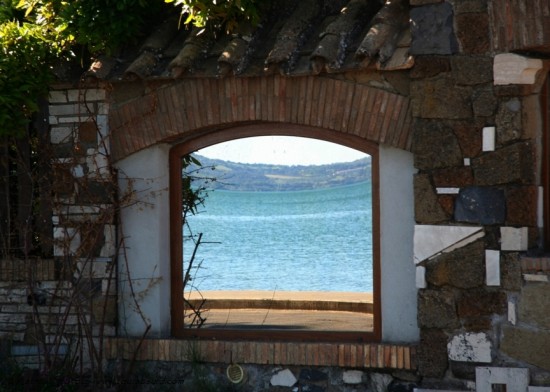 In any case, we managed to scrounge enough cash together to get sodas, chips, and gelato.  It was warm enough to wear shorts, but still too chilly to swim in the lake, so the place was not yet overrun by summer holiday crowds.  Or maybe they heard that this was a cash-only town and stayed away.  (I would have!)

We sat in the car near the water's edge on the north side of the lake and enjoyed the scenery while we ate.  Afterward we went for a short stroll and I had fun snapping photos of the lake reflected in the windows of a closed restaurant.

I was anxious to get back to work, but Dario really needed some more escape time.  Heck, I did, too.  All work and no play makes introverts even more troglodyte-like. 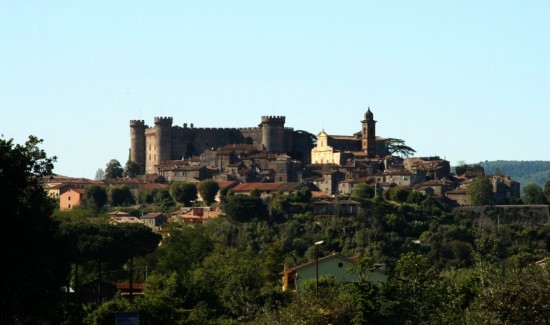 The castle in the photo is Castello Odescalchi di Bracciano.  Its contemporary claim to fame is that Tom Cruise and Katie Holmes got married there.  Meh, over it. 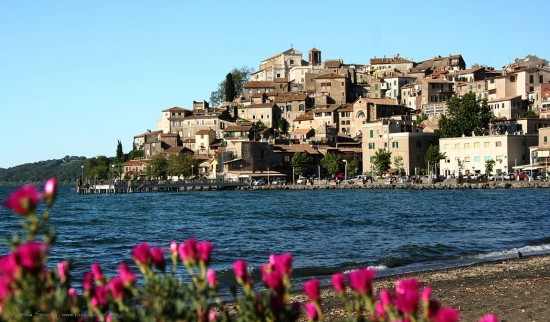 I try to sneak flowers into photos as often as possible.

We made our way around to the south side of the lake and found the cute little town of Anguillara Sabazia.  Most of the road signs just say "Anguillara", but apparently there is another town by the same name up north, so officially it has two parts.  We didn't mind either way.  We were just enjoying the scenery. 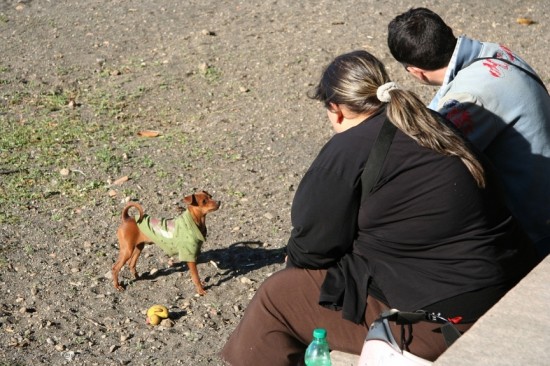 The squeaky – it must be thrown!

A big part of the scenery I enjoyed was a delightful selection of leetle dogs being played with and walked along the beach.  The town was already so cute and clean on its own.  The wee doggies were icing on the cake!

The lunch that we had brought from home ended up being less than satisfactory, so mostly what we'd eaten was junk food.  Dario had a strong hankerin' for something healthy and was hoping for fresh fruit.  He got his wish – right on the waterfront of Anguillara there was a frutteria! 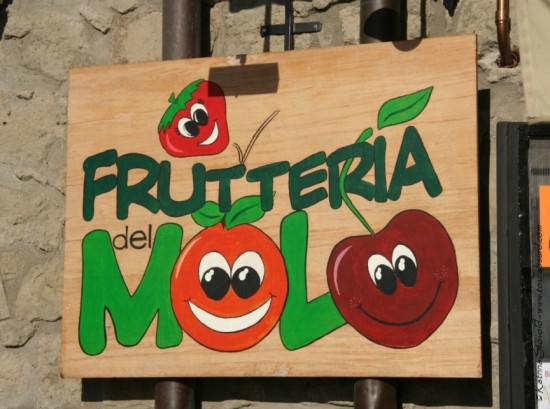 The disturbingly happy apple is begging you to eat it.

It was such an unexpectedly perfect find!  The people inside were nice, the fruit smelled amazing, and there was a wonderful assortment of juice, jams, snacks, and …Belgian beers, of all things. 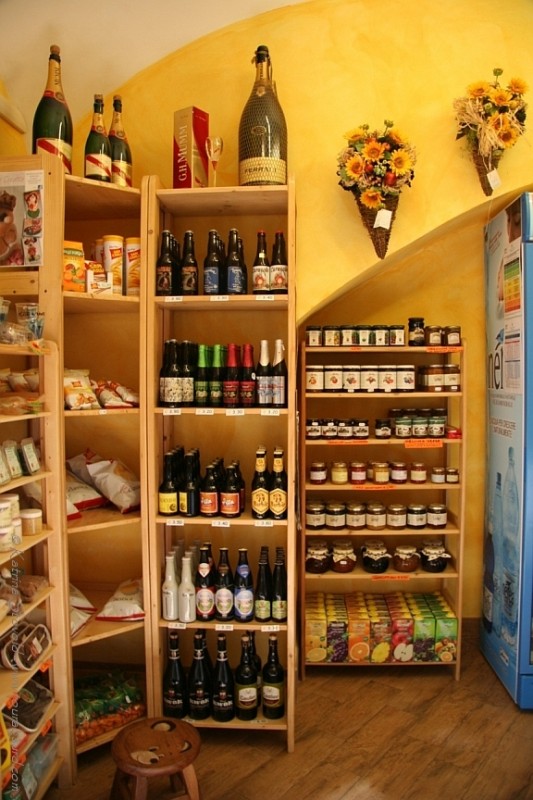 It's so merry, I almost want a beer!

We found a nice bench by the water and watched a swan swim and several ducks hop in and out of the water.  I am, on occasion, easily amused and found the ducks to be particularly hilarious.  They slid off the rocks in pursuit of bread crumbs, quacking and looking most undignified.  It slayed me! 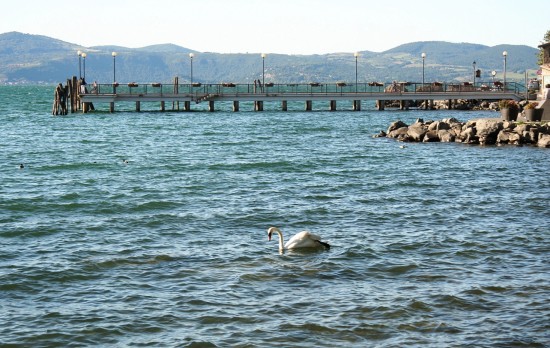 The swan was slightly more refined.  Until its bottom went up in the air, that is.

In Italian, a glass is called a bicchiere.  What we bought from the frutteria was a bicchierone – a BIG glass – of fruit (or "frooeet" as my Italian friends like to say).  It was marvelous!  Six euro and everything in it was perfectly ripe and delicious: strawberries, cantaloupe, pineapple, pears, apples, kiwis, and bananas.  What a bargain! 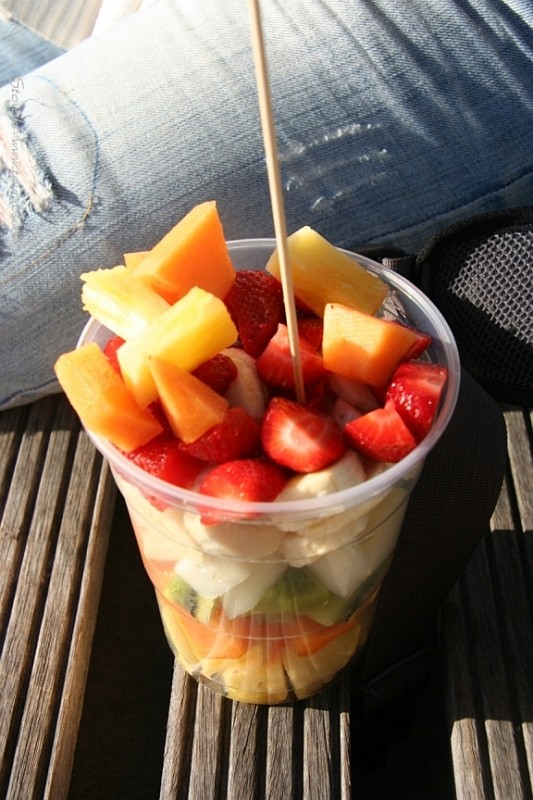 We enjoyed the heck out of the fruit, drank in the scenery (figuratively), and smiled a lot.  Although it is 1 or 2 hours away from the parents' house outside of Rome, we have added this to our list of afternoon getaways.  It looks like a lovely spot for a romantic holiday.  (Apparently movie stars thinks so, too!)  It takes a bit of effort on bumpy Italian roads, but it's so worth it.

There is some debate about the origins of the town's name.  Some say it has to do with being built where the cape on which it sits forms an angle with the shore.  Alternately, anguilla means "eel" in Italian, so there is some speculation that the name derives from this.  I believe the more commonly accepted theory is the former.  HOWEVER, as we were leaving town, we passed a restaurant that listed eels as one of the specials of the day, so who knows?  I admit, too, that I kept thinking of the shrieking eels of The Princess Bride and was secretly hoping for the latter. ;)