Because the photo opportunities are so VAST in Tanzania, I still have not finished posting pictures from our trip.  Not to mention that we have been rather busy for the last 2 years: visiting Egypt (egad, more pics!), moving from one place in Naples to another place in Naples, moving from Naples to Rome, visiting Ireland, getting married, going back to Ireland, visiting the US, moving from Italy to Ireland…  These Africa picture posts will likely go on for a bit!  Still, I'm ok with that because as long as I haven't posted everything, I'm not quite finished with the journey.  I did absolutely adore Tanzania and, frankly, I miss it every day.

This is primarily a photo (with captions) post.  There are 18 pictures.  Some of them are semi-epic and funny, others are just for storytelling purposes.  Hope you get enjoyment from looking at them — and maybe some motivation to go to Africa! 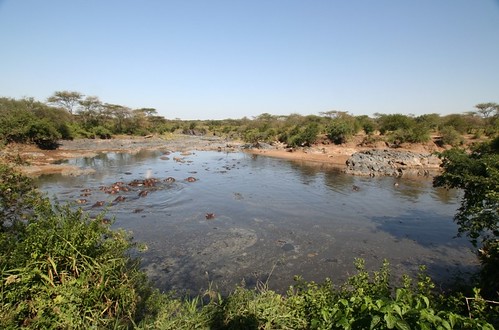 Overview of a hippo pool.

This was the largest hippo pool we saw on the trip.  It was awesome!  I was surprised at how close we could actually get to the edge.  I knew hippos were dangerous, but it was only later that, in terms of human deaths caused, I read they are the second most dangerous animal in Africa.  They are very aggressive and can move surprisingly fast.  The first?  No, not lions or leopards or even cheetah.  No, not elephants.  Nope, not even the Nile crocs.  …Give up?  It's mosquitoes! 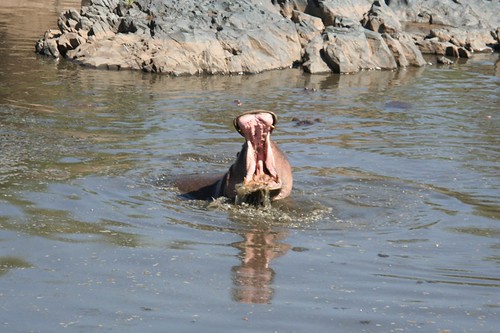 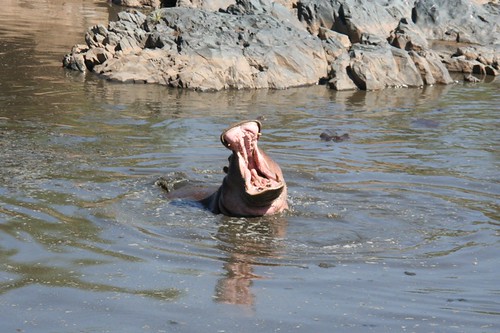 "I demand a fresh pool!"

Yeah…  Hippos hang out in their dung.  They use it to mark territory.  If you see one on land (preferably from the safety of a working safari vehicle, or maybe on the other side of a zoo fence), you may see them flick their tails as they defecate.  This spreads the dung around.  Great for marking territory and fertilizing, but a little hard on the loafers. 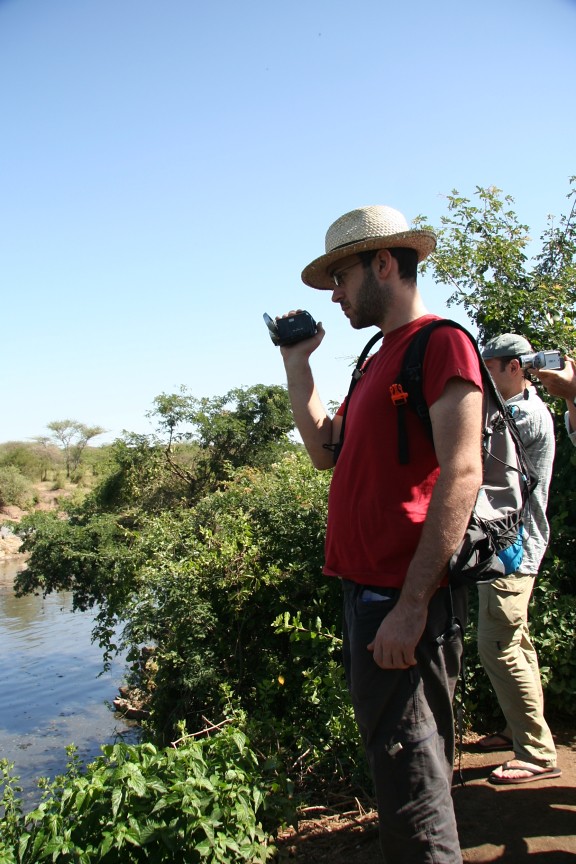 Dario does the videographer thing.

There were a handful of safari vehicles at the pool and everyone had their cameras and camcorders out.  Here I was thinking we were all rough and tumble — so daring for going on safari and braving the elements, the dirt, the bugs, the hungry hippos, the terrible boxed lunches — and yet there we were with a British family and their little girl.  She was about 5 and was neither impressed nor frightened.  Sigh.  When will people start teaching their kids FEAR?! 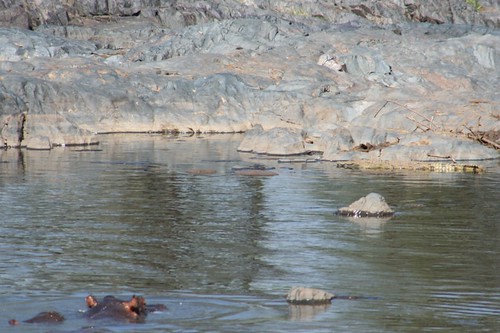 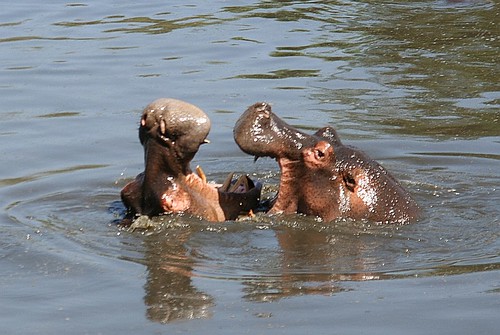 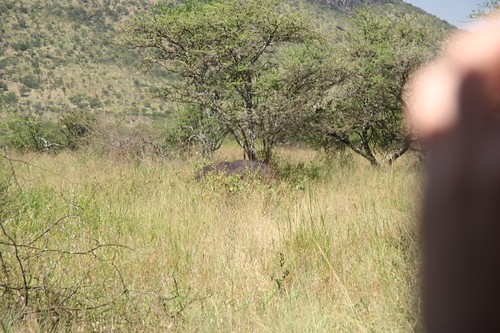 It's a hippo that is, rather unusually, out of the water in the middle of the day.  Just caught a glimpse as we drove past and saw it speeding off into the bush. 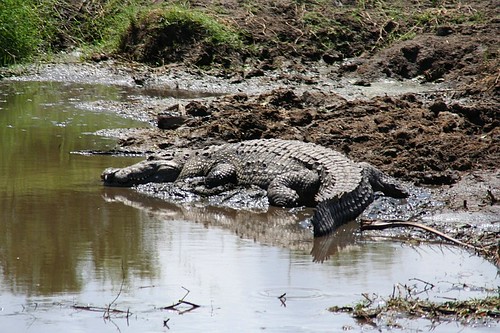 Not long after we stopped at a smaller hippo pool that was attended by one adult croc and one juvenile.  Well, at least as far as we could tell.  Since they are ambush predators, who knows how many there were? 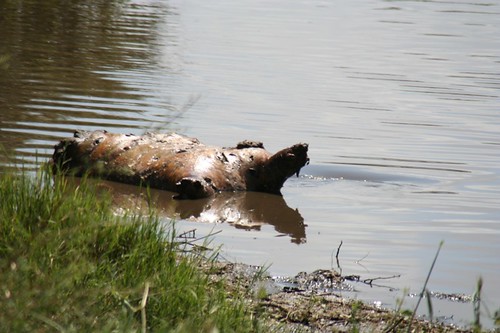 Downside of the circle of life.

Interestingly (or disgustingly, depending on whether or not you're eating right now), there was the carcass of a dead baby hippo floating in this pool.

Juvenile croc has a bit of a chompety-chomp on the carcass. 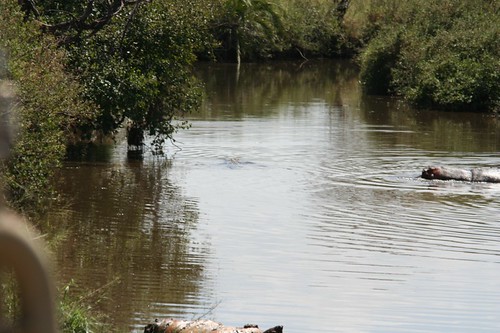 Big hippos keep a wary eye on the juvenile croc.

There were only a few hippos here, and they were justifiably suspicious of the crocs.  (You can see the head and wake of the juvenile croc just above the center of the picture.)  The hippos started getting agitated and making lots of noise, but we had lost track of the croc after it gave up its attempts to snack on the hippo carcass.  Fabian (our driver) soon pointed it out. 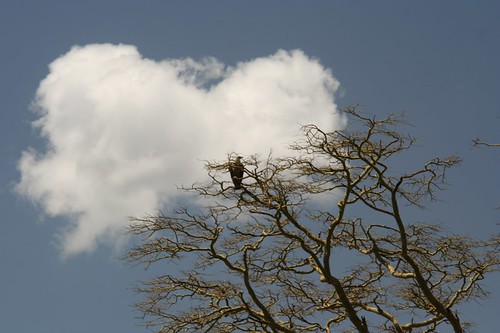 Handily, there was a cleanup crew stationed nearby. 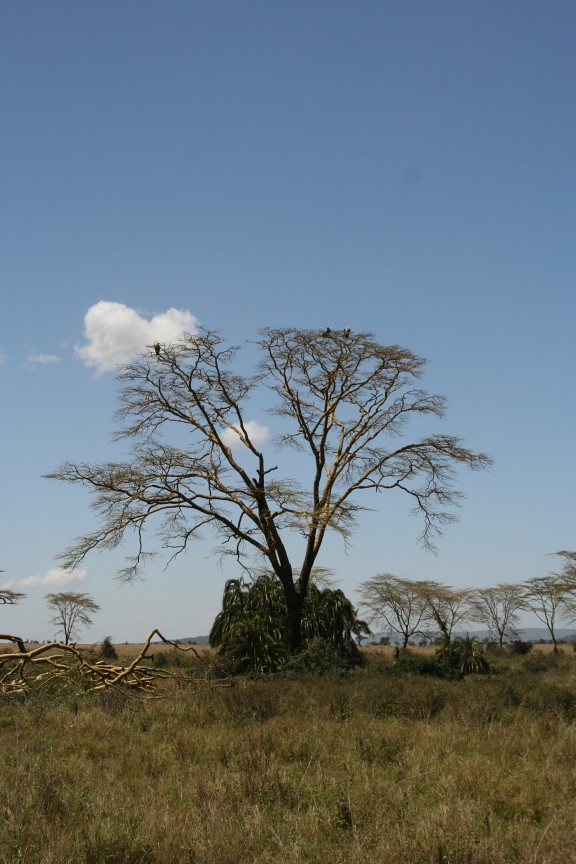 Wrong country, I know, but this put me in mind of That's What Friends Are For from The Jungle Book. ;) 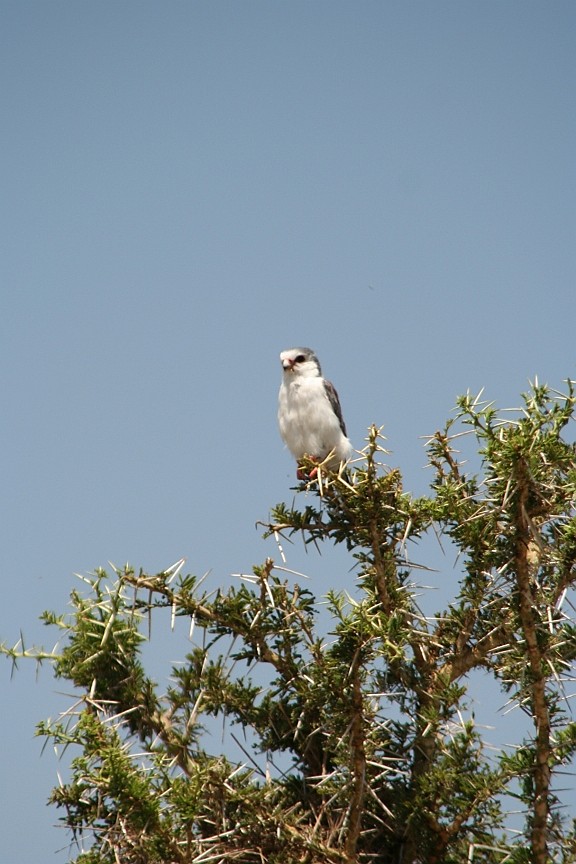 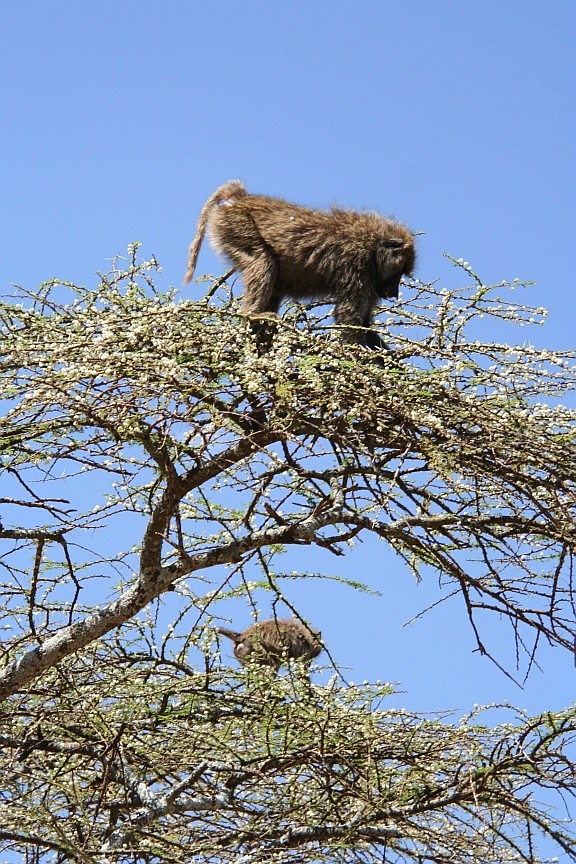 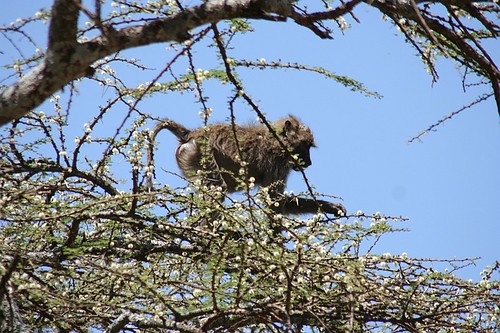 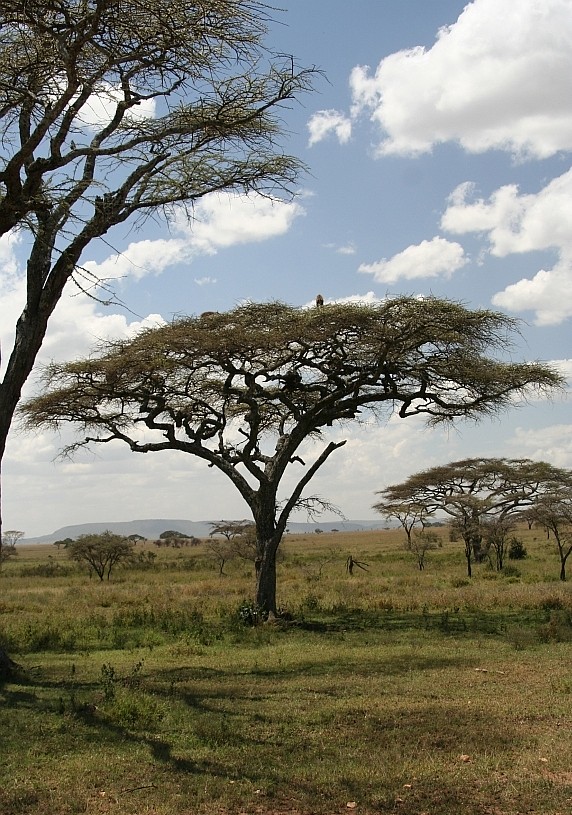 If you have visited the Serengeti, someday dream of going, or simply love animals and want to help protect this habitat, please visit Serengeti Watch.  As of this writing, the government of Tanzania is planning to proceed with their extremely ill-conceived plan for a highway through the Serengeti.  Please read up on the current situation and do what you can.

There is hope on the horizon, but there is more work to do.  Please help!

Serengeti Day 1 (Part 3) – Everything Under the Sun 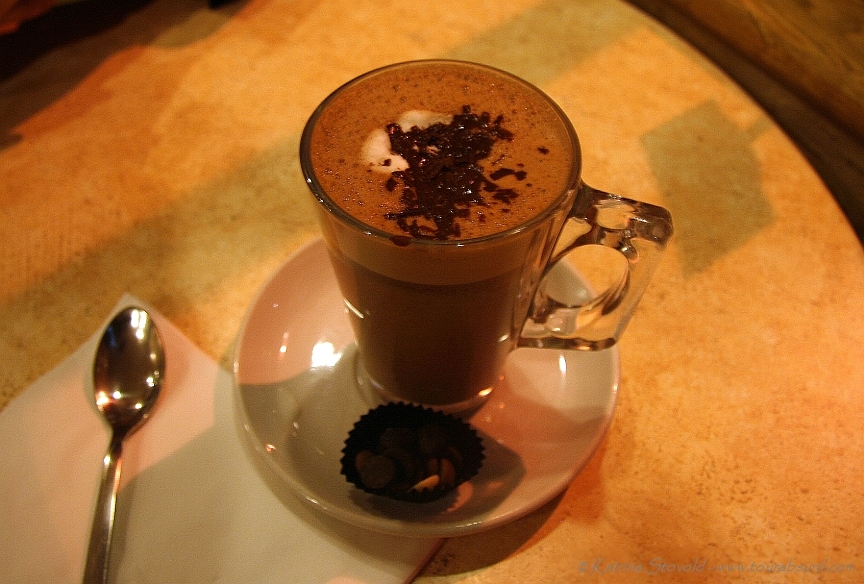 Hot and Sweet Diversions in Cork 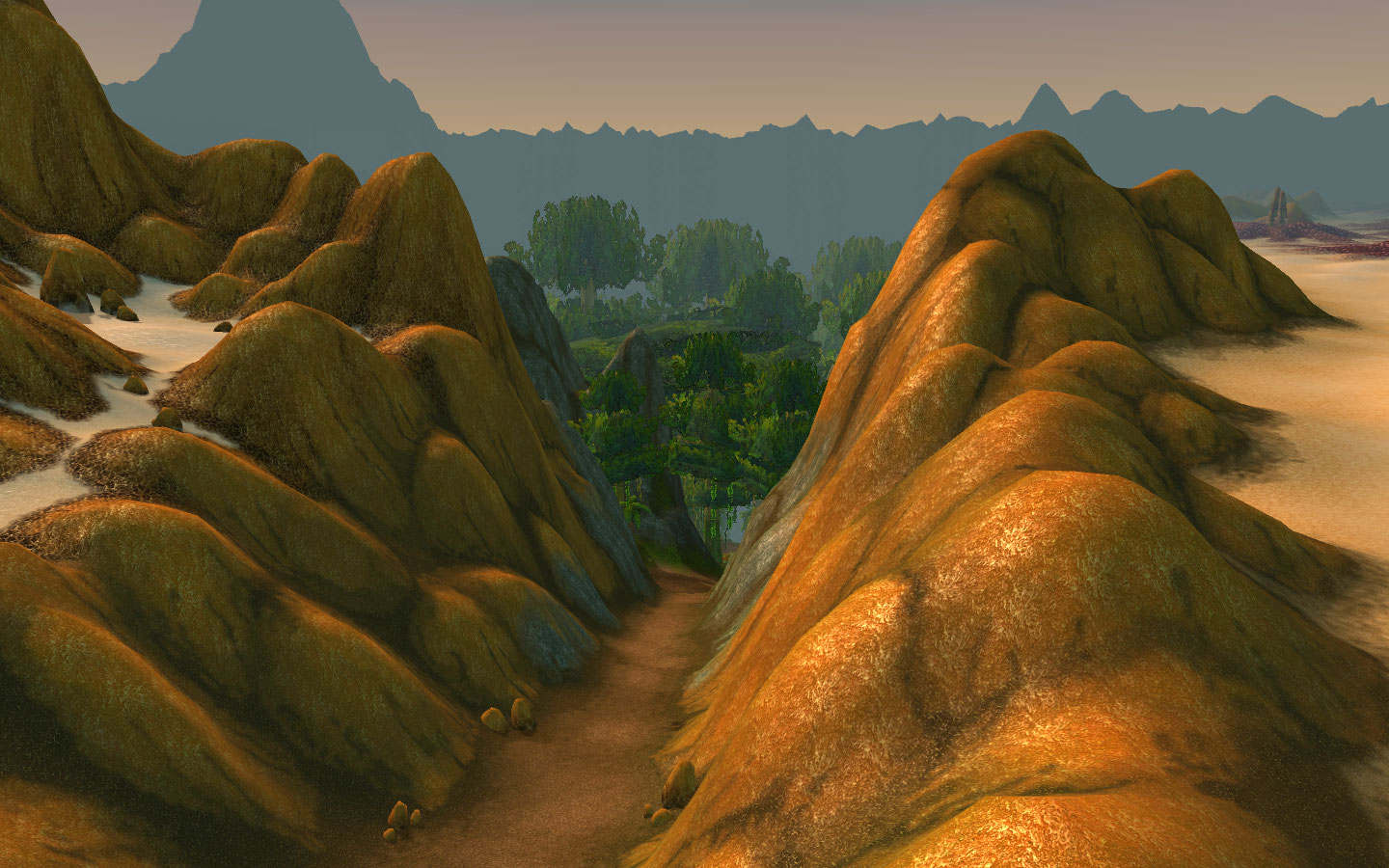 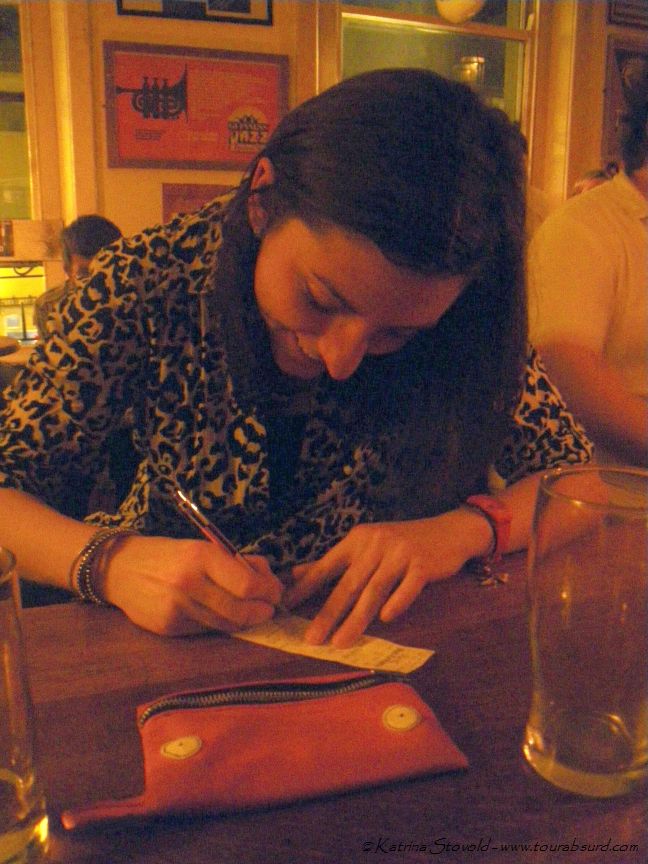