2020 marks the first year since I’ve been in Ireland that there will not be a St. Patrick’s Day parade. Every year it’s been getting bigger, greener, more sensationalised, and arguably more American. Used to just be lorries with advertisements for farm equipment, according to many Irish folks I’ve spoken with. This year it was set to go ahead with the tourism, celebration, and artificial greenery as per usual. But then nature stepped in and noped that away. 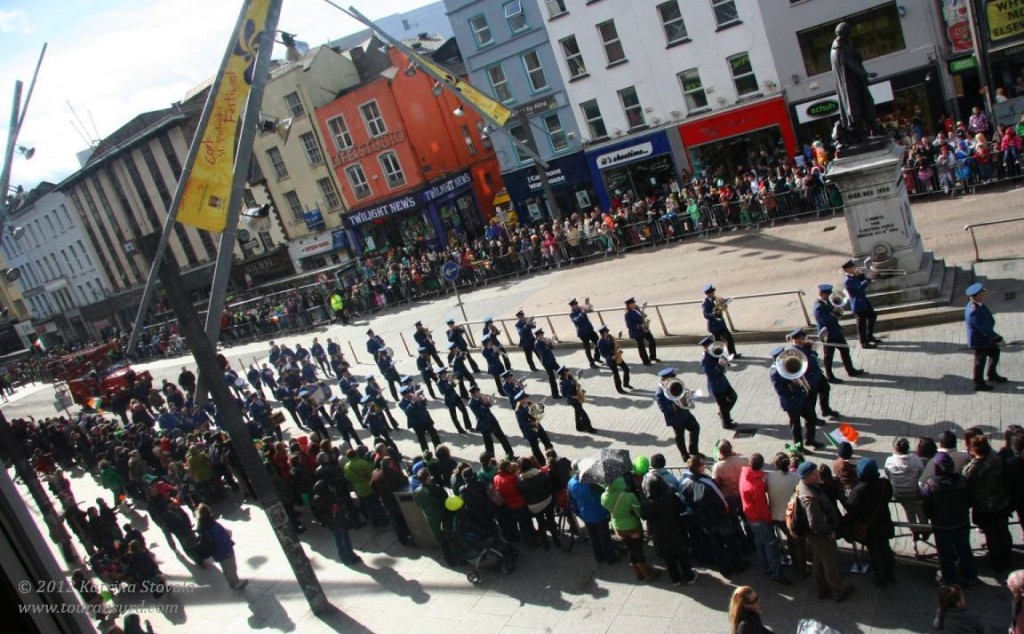 This post might not be as cheerful as you may have come to expect from me, though as I write it I am feeling a bit punchy. (There is silliness to be had, never fear.) Although I am hopeful and safe, I felt compelled to go out and photograph the streets of Cork during this time of limited social contact. I did adhere to social distancing protocols, didn’t go into any shops, and backed away from the one person who approached me. (She was asking where to find a toilet; I pointed her in the right direction, but apparently it was so urgent she had to go down a side alley to relieve herself. Yuck, but oh well. On any other St. Patrick’s Day she’d have been one of many.)

My feeling is that this time should be documented. There is definitely going to be a Before and an After with this pandemic, the long term implications of which we are going to feel for decades. I’m hoping it wasn’t a fatalistic urge that drew me to go out, but rather something keen and noble and journalistic. Guess we’ll find out!

In the last few years I have avoided the parade because crowds are one of my least favourite things. I’m an introvert, so that’s part of it, but I’m also petite. Crowds mostly mean a sea of elbows to be avoided, with towering strangers blocking out the sun. In a word: frustration. Even away from the parade, there are drunken litterbugs shouting and singing off-key tunes while stumbling between pubs. By the end of the day, there are discarded top hats and Guinness cans, tricolour feathers, and green sequins littering the gutters. Every year I fight the urge to run out in the streets while shaking a fist and yelling at tourists to get the hell off my lawn. (Note: I don’t have a lawn. I’m also a former tourist.) 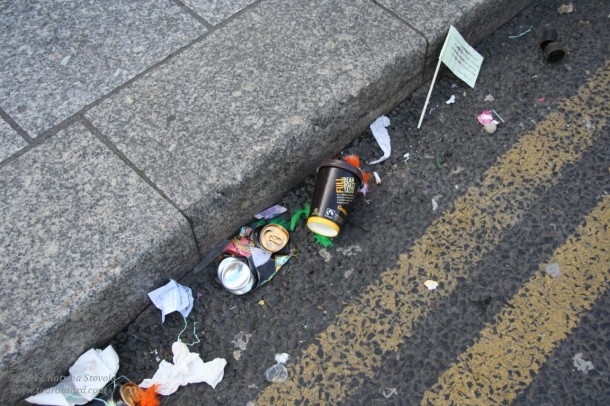 The detritus of drunken revelry

I live in the South Parish, so I did a loop from there to the city centre and back again. Things are about to get echoey and dark, so brace yourselves. Might be a good time to settle in with a cup of tea or even a flask. Get melancholy and write some reflections on the foolishness of mortals afterwards, maybe.

(You can click on any of the photos to see a larger, higher resolution version.) 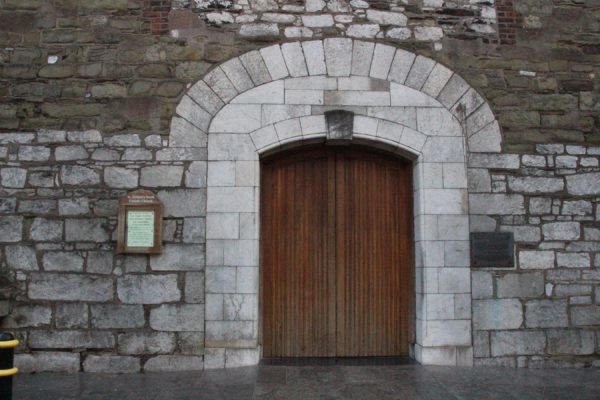 You shall not pass!

This is the door of St. Finbarr’s South, the oldest Catholic church in Cork. The doors used to be open for more hours than they have been in recent times due, I suspect, to declining attendance. The average age of regular attendees definitely leans towards elderly. Weddings, funerals, Christmas, and Easter are the only times I see multiple generations represented outside.

The sign on the door reads, “In the light of the worsening Coronavirus situation, All public weekend and weekday Masses are suspended in Cork & Ross Diocese. This church will be open as usual for private prayer. Please respect social distancing while in the church keeping two meters (six feet) apart from other people. – Bishop Fintan Gavin”. May peace, but not other people’s effluvia, be upon you. 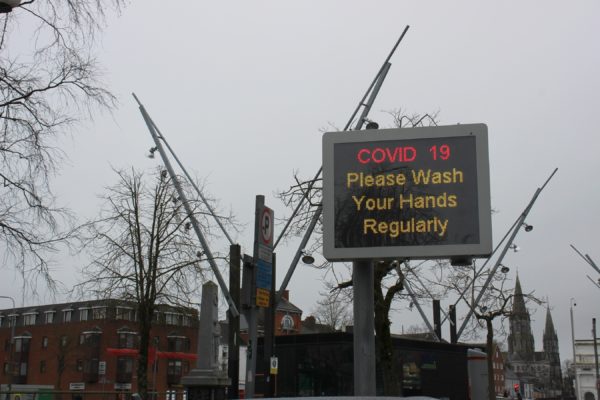 Upon reaching North Mall on my way to the War Memorial, I realised the ISO on my camera was set to Utterly (or shutterly, as the case may be) Wrong. I’d just planned on using the default auto settings so I could get in and get out quickly, but the shutter was so slow it kept catching the flicker of the sign, which made it seem like half of the letters had been smudged out. Fortunately, due to the very low traffic, I was able to stand in the middle of the street and fuss with it without getting flattened. 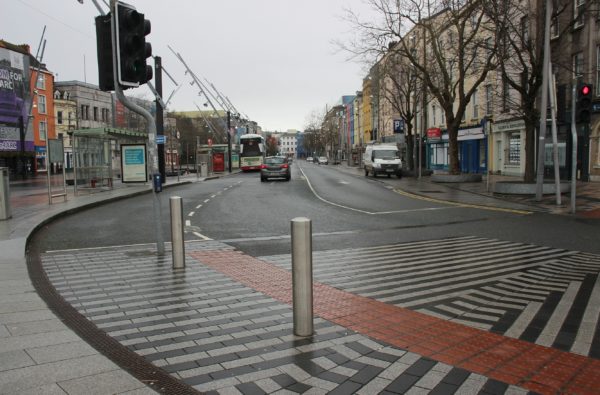 If this street was a font it would be Parade Sans

I turned onto the ironically named Grand Parade. Well, it’s ironic today, anyway. (Do not @lanis Morissette me. Yes “@”!) This is on the route that many parades and protests take through the centre. Usually teeming with cars, people, and skateboarders. And yes, thanks to my dog, I no longer classify skateboarders as people. Even when he’s not with me, my body tenses up at the sound of skateboard wheels on the pavement, expecting an explosion of barking. I’m thinking it’s PTSD, aka, Post Traumatic Skateboard Disorder. But today was blessedly quiet. 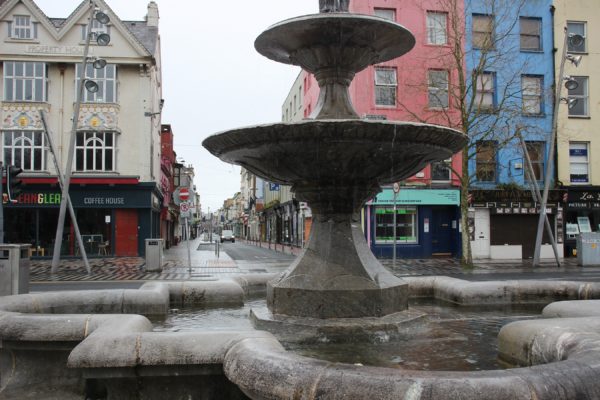 On a parade day this fountain would be crawling with people trying to get a better view. They’d also be standing on the bins, benches, and possibly small children. But today it is clear of humans, providing a view down Oliver Plunkett Street which is oddly and eerily empty. I’ve been re-playing the Mass Effect games lately and, frankly, I expected Seeker Swarms and Husks to be popping up at any minute. 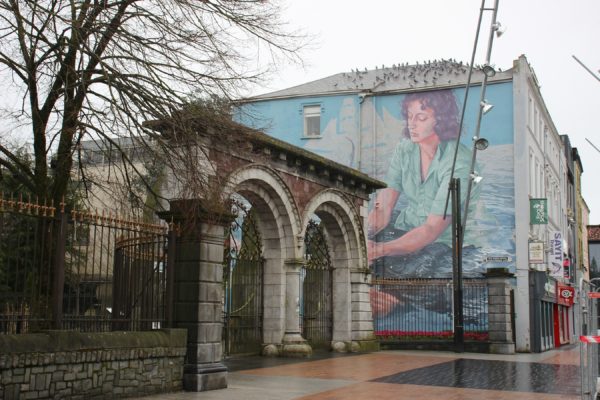 I don’t know if the park would be open on a holiday normally, but it definitely wasn’t today. I think the big blue lady with pigeons in her hair is holding the gates shut. I wonder if anyone told her she should go home and self-isolate.

All over the city there were signs talking about social distancing, washing your hands, or limiting the number of customers in the shop. McDonald’s had an extra sign claiming, “We’re keeping our restaurants clean and safe for you.” Strains credibility, but maybe I’m just being cynical.

One well meaning apartment building advised Visitors to “Protect Your Loved Ones” and not to visit if you feel unwell. I mean… lots of contagious people feel just fine. So, yeah. Well meaning, but misguided. You really should (unlike me at that moment) just get your posterior home. 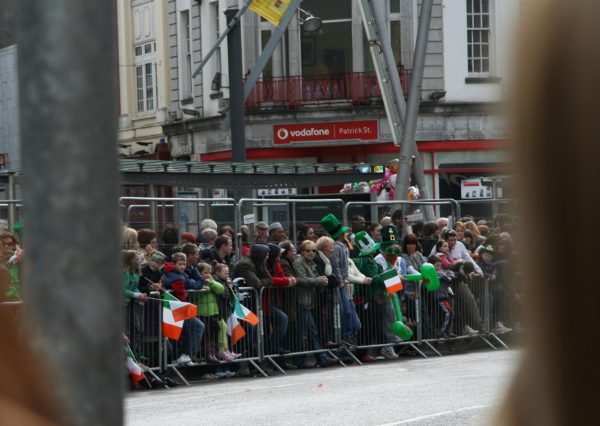 St. Patrick’s Street at the juncture of Winthrop Street

Now, before the Gallery Full of Emptiness, I’d like to provide a bit of contrast. This is a shot of the crowd seen, just barely, by squeezing through the other side of said crowd in 2013. You can almost feel the press of bodies, the parent pushing their kid to steal your spot, the near miss of an elbow to the eye! But then fast forward to 2020 and it’s just crickets and creepiness.

Yes, today has been rather sombre. On the other hand, I’ve had no fewer than three neighbours offer to pick up things for me next time they’re in the shop. I have my big, quarterly order from Who Gives A Crap coming in soon, so I’ve been offering loo roll (toilet paper) if anyone needs it. Had a nice Zoom chat with a friend in California yesterday. Have two other friends doing livestreams of art and storytelling. My adorable doggy is here keeping me company and we have plenty of food and water. And let’s not forget that, despite what the “if it bleeds, it leads” media would have you believe, humans are hardwired for cooperation. Not everyone will make it through this, but many of us will just by being kind, compassionate, and sensible.

I’d like to leave you with a word from our adorable president, Michael D. Higgins. He really is a lovely chap.

Mind yourselves and wash your hands. Beannachtaí na Féile Pádraig! 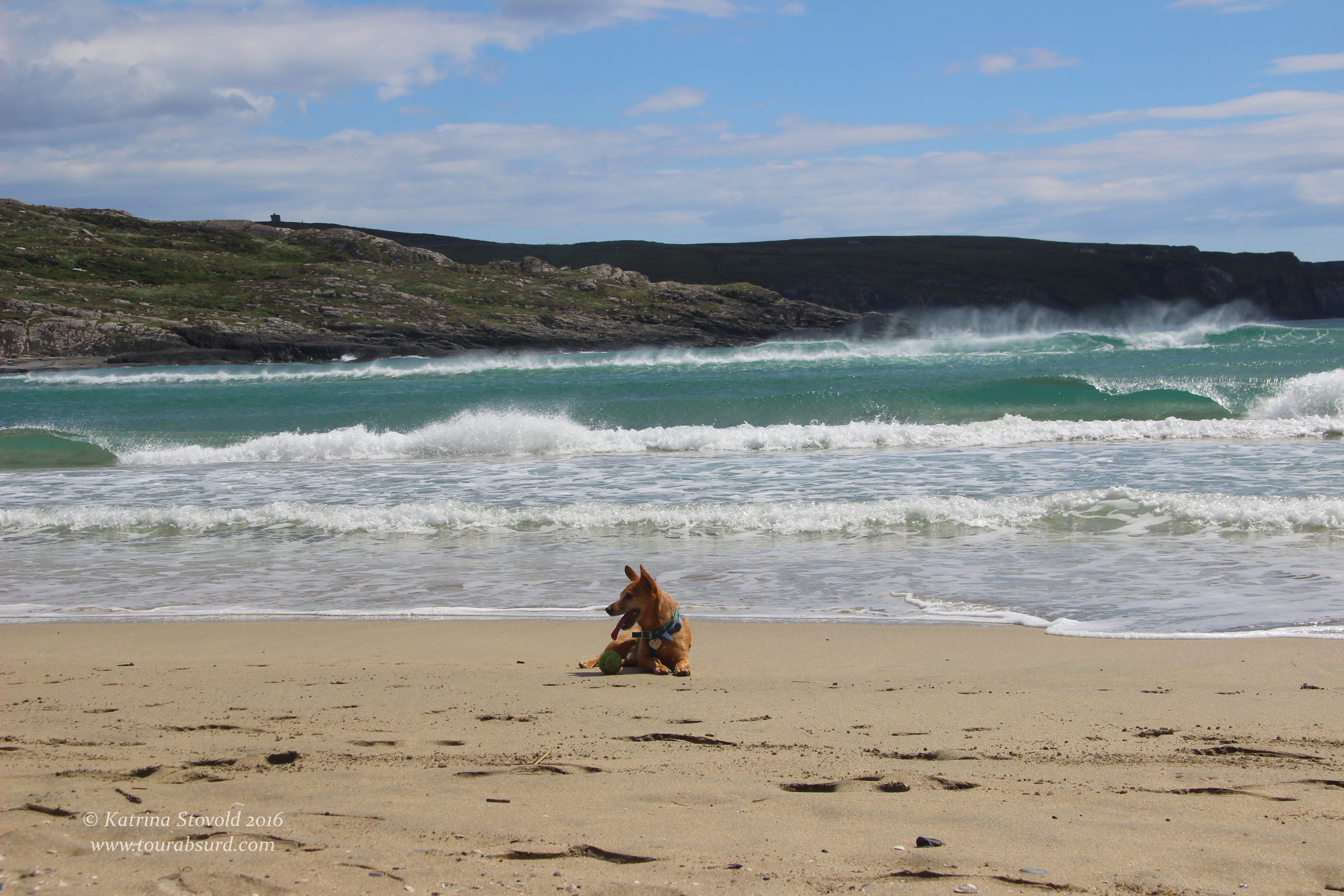 Summer in Ireland: Places to Visit in West Cork