The Highlands are filled with bens (mountains), glens (valleys), and lochs (lakes), most of which have several hundreds of years of stories to go with them.  Clans and kings, religious leaders and Viking conquests, faeries, heroic acts, betrayals, and lots of cattle thieving make for great storytelling.  Many of the tales are true, but a great deal of them are not.  Even so, they are a lot of fun.

In Glencoe (also spelled "Glen Coe") there are three peaks known as the "Three Sisters".  Elsewhere in the Highlands are the Five Sisters, another set of peaks, who were once known as the Seven Sisters – the youngest two were swept off their feet by two handsome Irishmen – but that is a tale for a different day.  We stopped to take some photos.  Just prior to our arrival, we had been told some of the more dramatic history of the region. 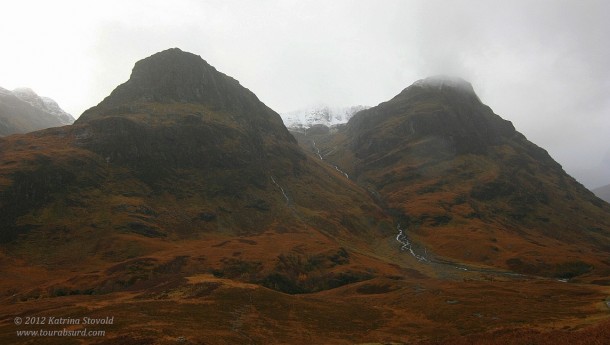 Two out of three ain't bad!

We didn't actually hear the tale of the Three Sisters.  Instead, we heard about the Glen Coe Massacre.  Before I get to that, however, I need to tell you about this tradition called "Highland hospitality".  It was held in much higher esteem than any law handed down by a distant monarch.  Basically, if you're caught out in bad weather, and whether you be friend or enemy, you can request to be taken into any nearby shelter.  No matter who you are, you'll not be refused for as long as a storm rages.  You'll be fed, cared for, and housed as if you were family, then sent on your way when the weather clears.  Now, to the massacre…

The way our guide told it, the clan chief of the MacDonalds got lost on his way to pledge his support for the new monarchs, William and Mary.  (It was January, so you can imagine the weather was not at its finest.)  He eventually arrived at the meeting place two days late.  The bureaucrat types who were in charge of the signing said, "Oh, go on, then.  Don't worry about the deadline.  Just sign the thing and we'll call it good."  So he made his mark then headed back to Donald territory.  If you read the BBC link about it, you'll see that it was a bit more complex than that, but who am I to get in the way of good storytelling?

Can't see the video?  Watch it on YouTube: http://youtu.be/8cPitxtk4m0

Thing is, the higher ups got bent of shape (foreshadowing Edinburgh as the financial center it is today, hmm?) and decided to make an example of Clan MacDonald over the tardiness.  Nevermind the pledge – they were late!  Didn't help that the MacDonalds had a reputation as cattle rustlers and bandits.

In any case, a bunch of Campbells were sent to put an end to the MacDonalds.  They arrived and sought shelter under the pretense of  Highland hospitality.  The MacDonalds dutifully let them in, sheltered and fed them, treated them like family – for TWELVE DAYS.  On the night of a terrible blizzard, the Campbell soldiers were given their orders and set about killing the MacDonalds while they slept.  There is speculation that some of the soldiers warned their hosts, as breaking the code in such a manner was considered absolutely appalling.

The next morning, 38 MacDonalds lay dead, while most of the others fled up a pass to a hidden valley.  40 more died of exposure along the way.  Political careers were destroyed, the flames of the Jacobite uprisings were fanned for many years to come, and the Campbell name was forever tarnished. 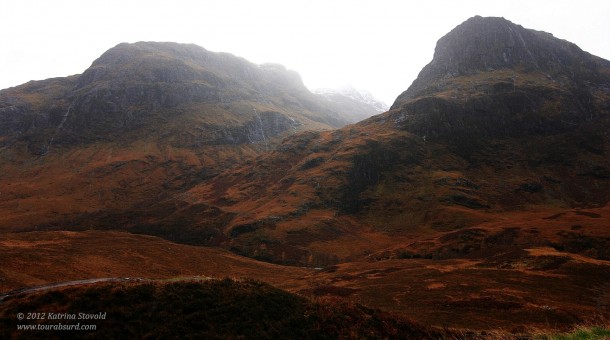 Third sister off to the left there.  The valley between these two is where the Campbells fled, or so they say.

The betrayal still reverberates to this day, with articles about Scotland's "Murder Under Trust" laws being brought up, people carrying the Campbell name still bearing the weight of suspicion, and sayings like, "Never shall a Campbell be sheltered under a MacDonald roof" (paraphrasing here) being spouted.  One of the most amusing tales – possibly a tall one – is about that famous American singer, Glen Campbell.

According to Eddie, our driver/guide, Mr. Campbell was visiting Scotland and the Glencoe area.  He and his entourage pulled into an inn run by a man whose last name was MacDonald.  Much to Mr. Campbell's surprise, he was refused lodging.  "Being American", said Eddie, "he sued the proprietor."  The judge's last name happened to be Campbell, which could lead you to suspect he'd be prejudiced.  Turns out he was, but not in the way you might think: he ruled in favor of Mr. MacDonald!  Yep, the judge was biased, all right, but in favor of well known Scottish tradition.  No MacDonald need ever shelter a Campbell!

I've no idea if this is true, but Eddie certainly made an entertaining tale out of it.  I'd hate to go up against Scottish tradition!  What about you?

Gone head to head with any moral codes lately?

Thank you to our driver/guide, Eddie, of Rabbie's Trailburners for this fantastic story! 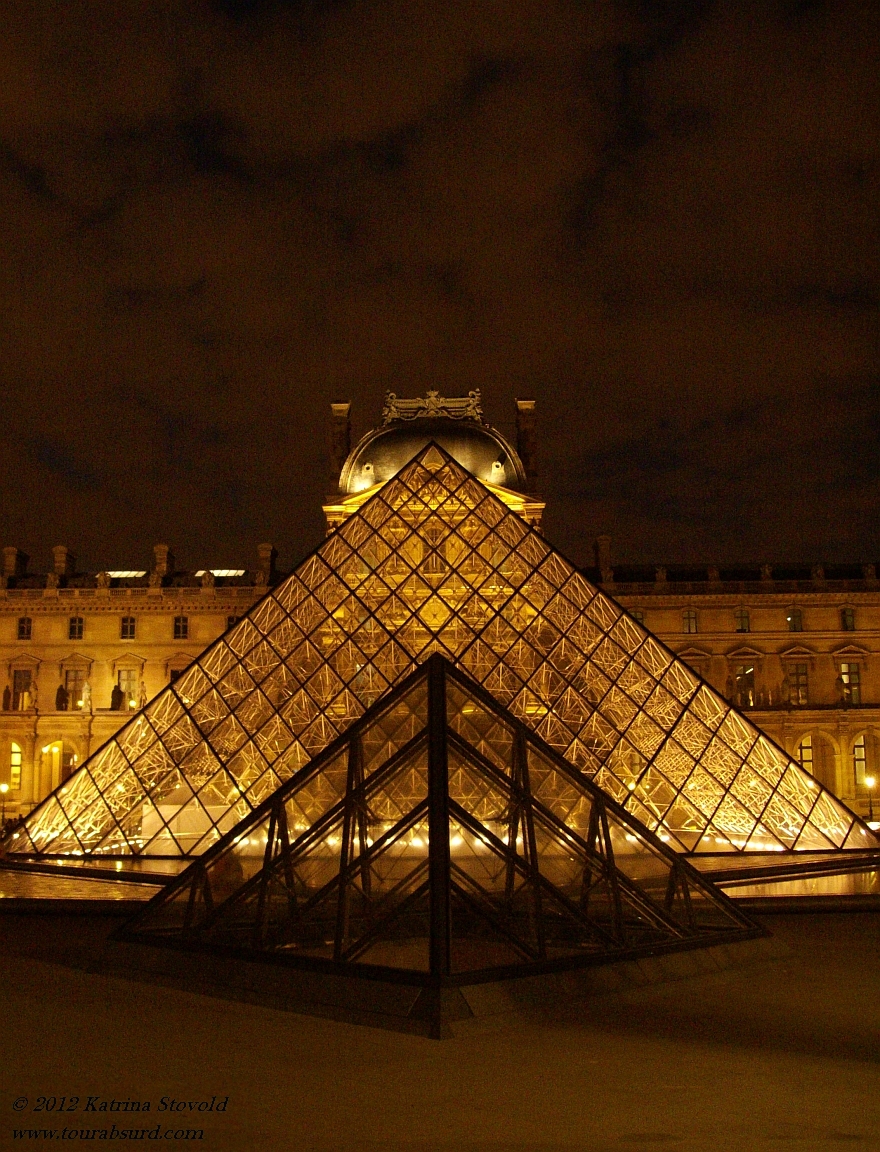 The Louvre at Night 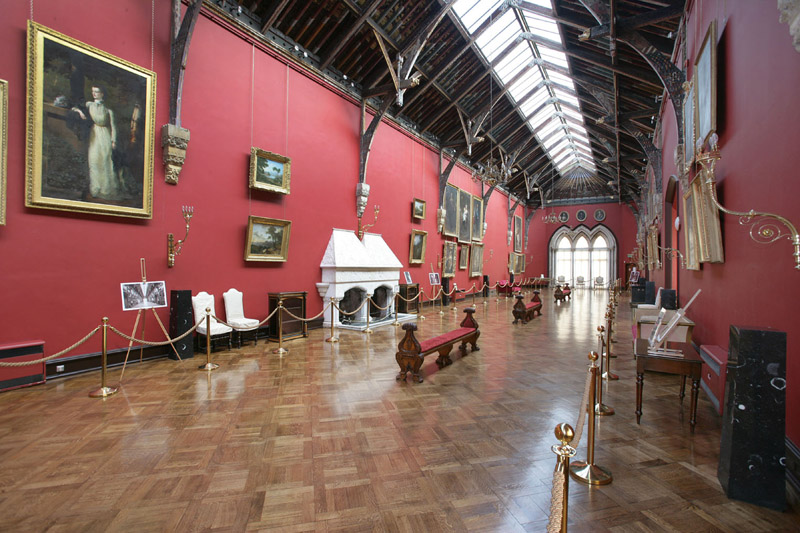