Christmas waves a magic wand over this world,
and behold, everything is softer and more beautiful.

I wanted this post to be filled to the brim, like a mug full of glühwein, with silliness and irreverence.  I was planning to make you snort, giggle, and perhaps roll your eyes.  But I have gone off track and slipped into gleeful delight. Austrian Christmas Markets are BEAUTIFUL!  They embody everything that I find grand and lovely and warm about Christmas – and I cannot wait to show you pictures! 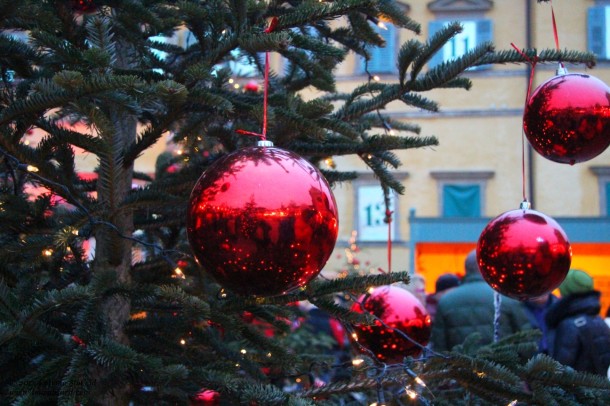 The trip began in Vienna, passed briefly through Krems, took an intermission at Schloss Schallaburg, stopped most gloriously on the shores of Wolfgangsee, and finally wrapped up in the land of Julie Andrews and Mozart.  That is to say, Salzburg.  And even though it was 6 days of Christmas markets, it was not enough. 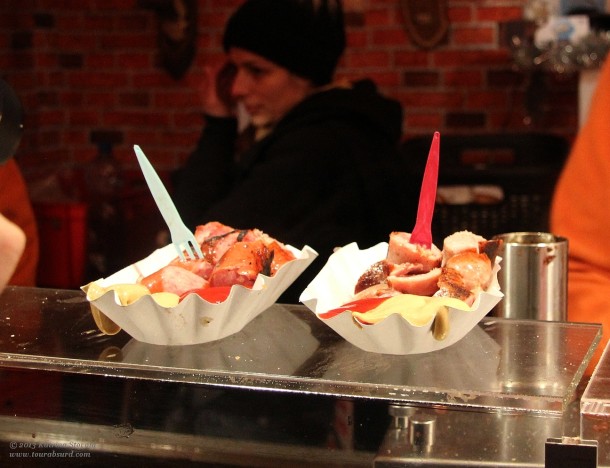 Käsekrainer: the best wurst in Vienna.  …Had to go there at least once.  Sorry.

The fires of enthusiasm were fanned by some of the pre-journey emails exchanged with Elena of Creative Tourism Austria.  She joined in for the first half of the trip and showed us around some of the wonderful markets in Vienna.  We were all glad a Real Live Austrian Person was there to show us where to find the best grub.  Käsekrainer is sausage with leetle chunks of cheese in it.  On a cold Austrian night, grab yourself some wurst and mug of something hot, and you’re set!

With me were Sarah and Terry of LiveShareTravel.  They are big fans of Austria and, had they not years of practice being British, might have given into the hand-clapping glee that I was fighting so hard to control.  Clapping in Sarah-speak manifested as she said frequently, and with a smile, “Time for more glühwein!” 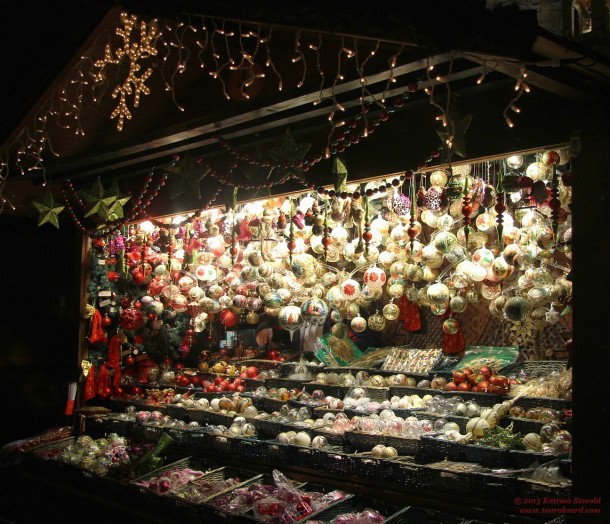 We hit a few different markets in Vienna the night we arrived.  The following day we attended a cooking class with Thomas Hüttl.  He left the selections up to us based on our favorite tastes and interests.  It resulted in an odd, yet delicious, combination: a bouillabaisse soup starter, cheese and onion spätzle (like mini gnocchi, but yummier!) for the main, and apfel strudel with chestnuts for dessert!  We rolled out of there and caught a cab back to the hotel.  I don’t know how, but we managed to eat again the next morning before being whisked off to Krems.

Elena had a surprise for us and wasn’t giving away any hints.

After checking into the hotel and relaxing for a bit, she came to take us to our mystery destination.  It turns out it was… her parents’ house!  They were going to be traveling during Christmas and decided to have the big family dinner early.  Because they’d all met Sarah and Terry more than once on previous trips, they decided to invite the lot of us over!  It was so touching and warm.  I opted not to take photos because it was so intimate and sweet.  I will say that the wine flowed freely (that part of Austria is wine country) and the food was lovely.  Elena, her parents, and her brother are all terribly lovely people.  You know, the kind that give you hope for humanity.  …yeah, like that. 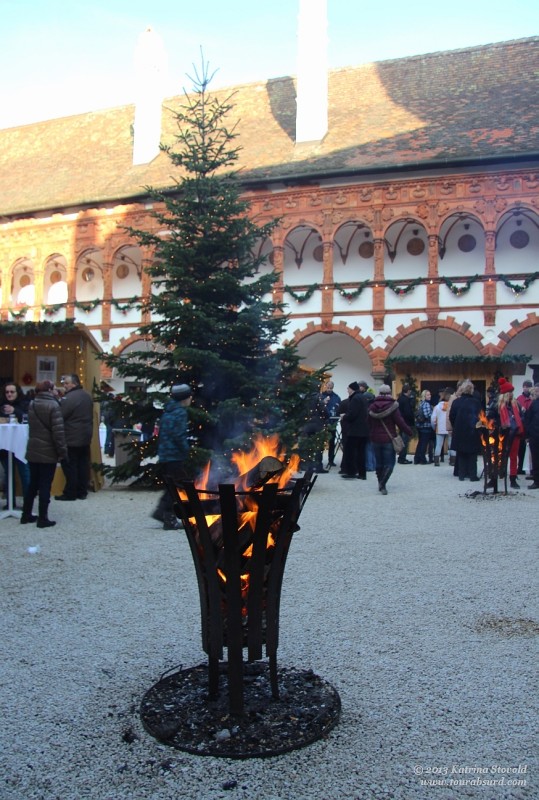 Fire baskets keep your outsides toasty while glühwein does the same for your insides.

After a leisurely breakfast the next morning, we left for Schloss Schallaburg, a Renaissance castle.  Yes, a Christmas market in a castle!  How cool is that?

It was the only market we had to pay an entrance fee to attend, so I was a little disappointed when I saw the size of it.  At first I thought it was just the small group of stalls in the courtyard.  I was mistaken, gloriously mistaken, as it turns out!  The entire building was filled with tables full of cookies, ornaments, warm and woolly knit items, wine and liqueurs, jams and jellies, handcrafted wood carvings, miniature nativity sets, and on and on.  And just when you thought you’d finally found an end to it, another corridor or stairway would present itself and lead you off to more delights! 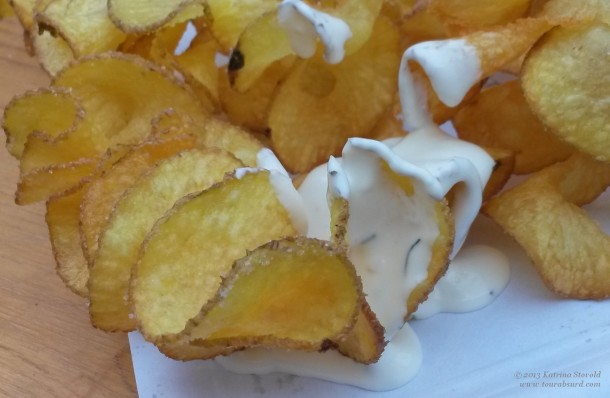 Freshly made, spiral-cut crisps.  It doesn’t get any crispier, folks!

Eventually, we did manage to find the outside world, and the fire baskets, again.  The courtyard, it turns out, was mainly for the messy, drippy, foodie type items, and a small forge for a couple of blacksmiths.  I probably could have spent the entire day roaming the halls.  It was great!

This was the first place I noticed how much family was a part of the Christmas market experience.  Vienna had seemed to attract a rather young and hip, or working class professional, crowd.  At Schallaburg I noticed groups composed of several generations tootling around together.  There was even a playground with a large wooden dragon built down the center.  And for those with mobility issues, one of the main stairways had a wheelchair lift built along the side.  From here on out, seeing parents and grandparents carrying around tots, taking in the wonders of clockwork bell-playing contraptions, and sharing sweets became the norm. 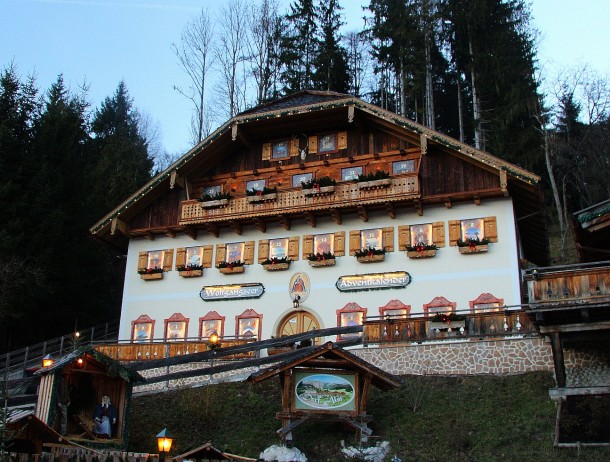 Yet with so much more of Austria to see, we zipped away to the town of St. Wolfgang.  We arrived quite late, which was lovely for the lighting, but unfortunate in that we didn’t realize it was closing soon and would not be open the next day.  Sarah got some truly brilliant photos of the whole things, so please take a peek at her post about this, the most Christmassy town in Austria. 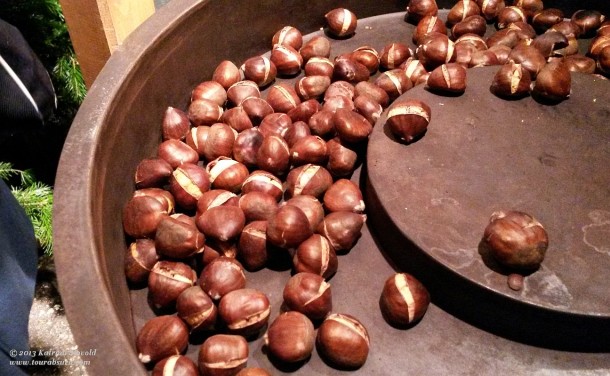 I did get photos of a few important things, like roasting chestnuts.  I also snapped a cute photo of Sarah and Terry toasting each other, but you’ll have to pop over to their site to see it.  Their two steaming mugs of tasty adult beverages line up to display the name of the town in a lovely ribbon and, well, it’s just adorable!

Can’t view the shot?  See it on Instagram: http://instagram.com/p/h9BV5hu_V2/

Zur Salzkammergut Krippe was a very large nativity set, that included representations of all kinds of local alpine characters, like the jaga (“hunter”, which is jaeger in German, but jaga in the local dialect).  They appeared to be made out of huge chunks of wood, possibly carved by chainsaw, but I’m only speculating.  In any case, the moon was full and lined up like a halo just perfectly over the head of the angel outside the manger. 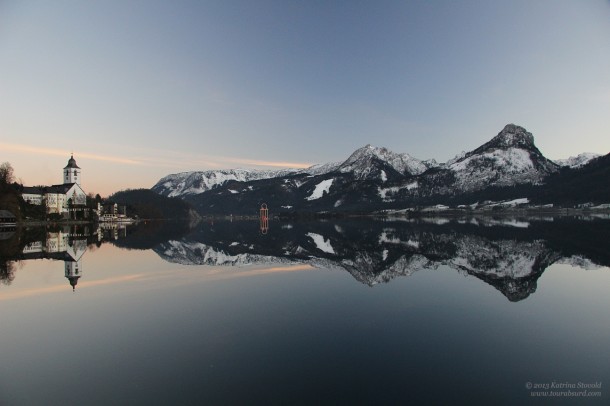 Our hotel is just past the church on the left.  Not bad, eh?

The White Horse Inn, the gorgeous hotel where we were staying, has a very large and lovely spa.  We decided to have an entire day filled with massage, steam rooms, and dips into the outdoor pool.  Never fear, gentle reader, for the pool was heated!

The water was not hot, as such, but definitely warmer than the marrow-freezing ambient temperature around the lake.  The trick is to keep your head above water until just before you go back in, so that your wet hair does not cause you to catch cold, just like your mummy/daddy/auntie/uncle warned you about.  For people of average height, this is no problem.  For a petite person, however, it takes a bit more effort.  I did eventually find that I was able to stand on the very tips of my toes and take in the view.  I know you are relieved and I thank you for your concern. 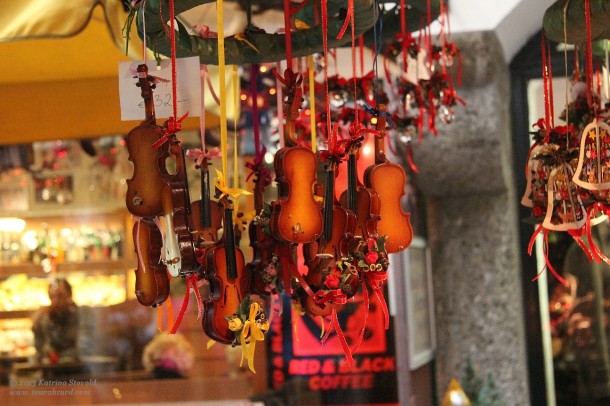 This is what you’re playing when I complain about being tired from travel, isn’t it?

After bidding a reluctant goodbye to St. Wolfgang, we headed to Salzburg.  It took a little while for me to warm to the town after having reveled so gloriously in the luxurious atmosphere of Wolfgansee and its surroundings.  However, with the help of my travel companions and, later, our lovely tour guide, Martina, I soon came to appreciate the never ending diversity and availability of the lovely fare of Austrian Christmas markets. 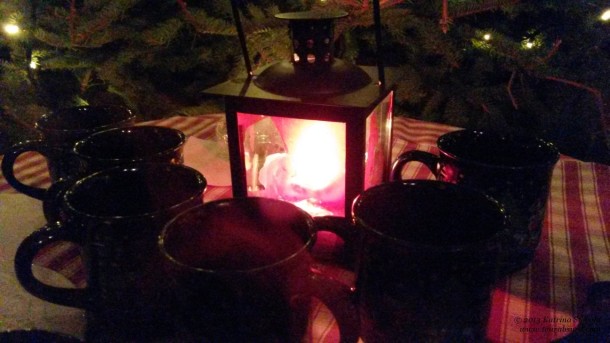 The warm glow depicted here is just what you get as you listen to the music and sip something hot.

Over the course of a couple of days, we explored a small portion of the eleven – yes, eleven – Christmas markets in Salzburg.  We started with a small one by the famous Mirabell Gardens, home to many iconic scenes from The Sound of Music (the gardens, not the market, as such).  We moved on to the large market by the Salzburg Cathedral, where Sarah discovered… hot white Russians!  (And, yes, I do mean the drink, for you gutter-minded folk.  Ahem.)

Thanks to a sumptuous meal at Stiftkeller St. Peter, possibly the oldest inn in Central Europe, we also discovered the St. Peter Christkindlmarkt.  It was tucked away around a corner, with a rather large nativity set and several Christmas trees.  (They really don’t skimp on trees in Austria, let me tell you!)  Initially, I was reluctant to attend because the program listed music played on brass instruments, which seemed like an awful lot of sound for such a small space.  Sarah’s enthusiasm overrode my objections, however, and we ended up catching the tail end of the performance.  It was ever so gentle and atmospheric; I don’t know why I assumed marching band proportions.  It was absolutely lovely!  Highly recommended. 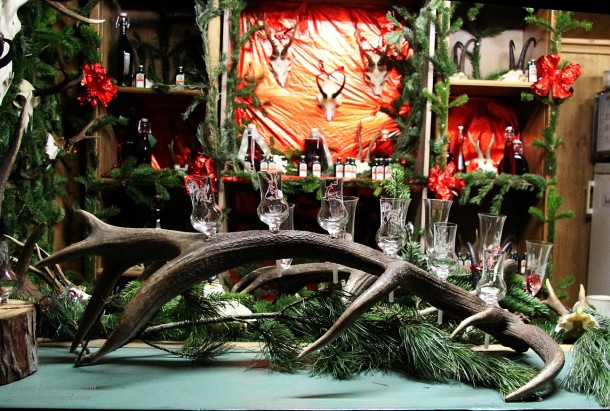 Our final discovery, though by no means our final visit to the markets (many repeat visits to test out the food and beverages, you understand), was Schloss Hellbrunn.  It was another market in a castle, reached via short bus ride from the center of Salzburg.  It was huge and sprawling, with the most number of Christmas trees I have seen in any place outside of a tree farm.

A few scenes from The Sound of Music had, of course, been shot here, including the famous “Sixteen Going on Seventeen” gazebo bit.  We tried repeatedly and in vain to locate said gazebo, but it was out in the middle of the gardens and unlit.  The lack of lighting meant, according to one local, that it was closed for the evening.  Alas!  No pictures of Terry and I kicking up our heels to the sound of Sarah’s exasperated sighs.  Perhaps next time, Austria, perhaps next time.

For you see, there will be a next time.  Austria in winter is so chock full of things to do, see, photograph (and eat!), that 6 days wasn’t nearly enough.  Not to mention there are three other seasons which each have their special charms (and foods) to be experienced.  As a famous Austrian once said, “I’ll be back!”

This trip was arranged by the Austrian National Tourist Office and Creative Tourism Austria.  All opinions, bad jokes, and puns are, however, my own.  Really, don’t blame them for the puns; it’s not their fault!

4 thoughts on “From Vienna to Salzburg: Austrian Christmas Markets!”