One of my first, and best, experiences in Morocco is having dinner in the great central square of Marrakech, the Djemma el-Fna.

As previously mentioned, I was traveling on a very limited budget.  Fortunately, my Couchsurfing buddy and travel companion, Rachid, had been to Marrakech a few times and knew where to find the cheap, delectable eats.  I am glad that he, and another Couchsurfer who met up with us for dinner, had an idea about where to go, as I was like a kid in a deliciously spicy and richly varied candy shop.  I wanted to try everything, especially if the food in the stall came in pretty colors! 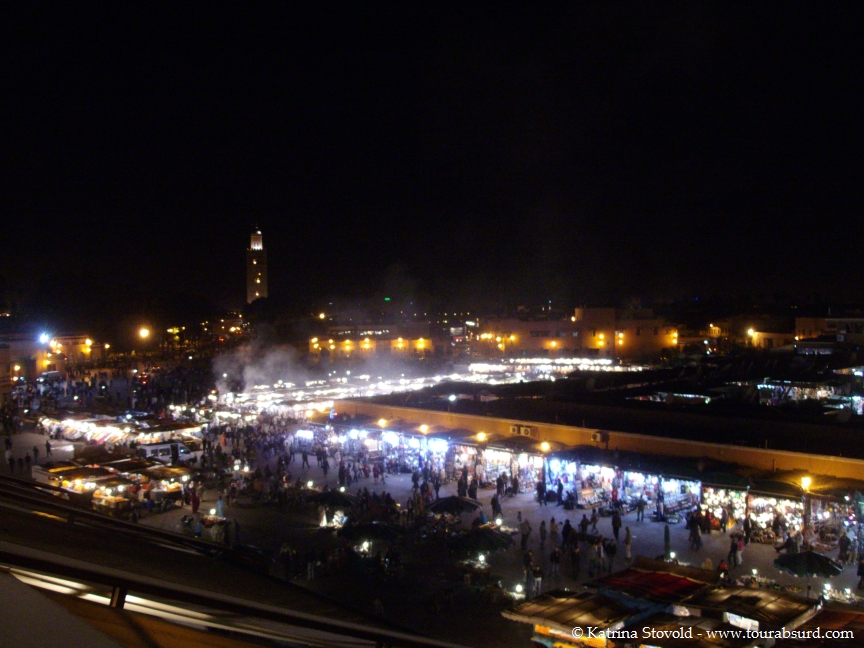 Note the smoke and steam rising from the food stalls.  Mmm-marrakech!

Amanda, from MarocMama.com, had suggested trying tangia in her guest post (she even provided a recipe — go try it!).  As I was to learn later, "tangia" is a relatively general term for meat-type products cooked with oil and spices in a big clay jar.  Often, however, it also means an entire sheep's head.  Umm…

Well, I was willing to take the plunge (I do like haggis, after all)!  If it was popular with the locals, I would show Just How Adventurous And Liberal I Am By Partaking Of The Native Fare. Rachid, on the other hand, made a face and informed me, "Sheep's head is gross!"

I blinked at him.  "B-but I thought it was a local favorite and, err, I'm totally willing to, uhh…"

"Sure, you can try it if you want," he said dubiously, making another scrunchy face.

Which turned out to be lamb — meat only — cooked in the same spices as the sheep's heads, but requiring much less effort to choke down.  (Indeed, it was delicious!)  Our companion, however, went full-on sheep's head and et up all manner of mysterious and questionable ovine tidbits.  …Ah, locals!*

The stall owners served us small glasses of tea which likewise turned out to be standard-setting.  No, it was not mint tea, nor was it black tea, nor even verbena.  I don't actually know what it was.  The best I can get out of Rachid is "umm… spiced tea."  I'm sorry it's not very specific; you'll just have to trust me when I tell you it was AWESOME.  And you need to go to Marrakech to have some.  You do, really.  Trust me.  You'll thank me.

*Apropos of nothing, Rachid is Moroccan, but not from Marrakech. Perhaps this had an effect on his lack of affinity for sheep's head? Or maybe Rachid is just weird.

The tangia (not to be confused with tagine which is cooked in a clay pot instead of a clay jar) was delicious and accidentally set the bar rather high for the rest of the trip.  Since I have Amanda's recipe, I will soon be trying it at home.  Hope it turns out as well, despite the lack of clay pot action.

Unfortunately, the pictures Rachid took of the tangia stall were lost.  Sabah, from Sousoukitchen, just emailed permission to use this photo. 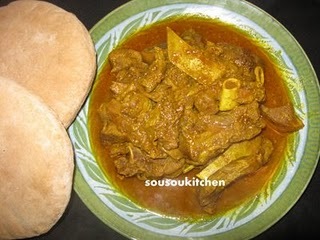 You can find more in the original post.  There is also a nice illustration of the difference between tangia and tagine.

Our tangia looked almost exactly like this, all yellowy and meaty, with plenty of sauce. The round Moroccan bread was there, too. The idea is to tear off a small chunk, open it up — similar to pita bread — and use it to pick up your food, absorbing delicious, delicious sauce all the while. In fact, the stall owners will happily give you extra sauce for the rest of your meat and bread. They know how good it is!

At the end, they hand you a few pieces of paper — lightweight butcher or pastry paper — and pour water on one so you can wipe your fingers off.  Of course, I was busy licking the tangia sauce off my fingers like a complete barbarian and nearly missed out on the paper.  But hey, live in the moment, right?  Who knows when I'll be back in Marrakech, stuffing my face at the night market?  Carpe Tangia — seize the sauce!

Have you ever been rescued from eating questionable food at the last minute?

(Or maybe you took the plunge and ended up liking something despite yourself?)

What Flattr is and why you should be using it. 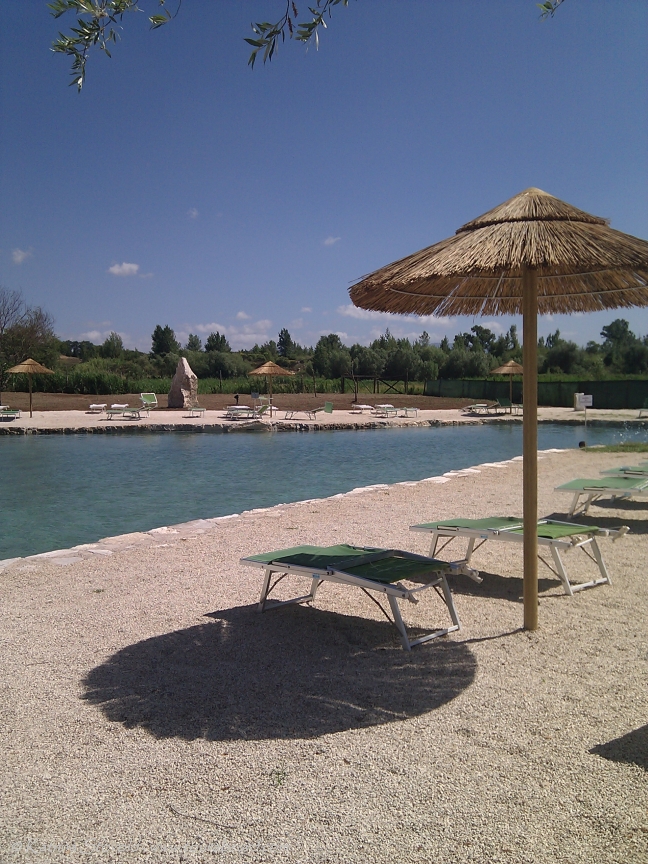