Tonight I sent a text message to our friend, Mena, whom we met in Egypt.

Our trip to the land of the pharaohs was a whirlwind week spent seeing as many sights as we could, cram packed into a package deal with a tour company.  It was definitely not a long and slow backpacking kind of trip designed to meet and connect with people.  Indeed, the trial article I wrote that got me accepted by Examiner.com was about avoiding this kind of thing in the future and pursuing more — dare I say it? — authentic travel.  Traveler vs. tourist kind of thing.  Still, I'm glad we went, and I look forward to returning and doing it "right" next time.

We had booked a few days on a cruise boat on the Nile, in large part, I admit, because 11 years prior I had worked on the film The Mummy.  I had always kind of liked Egypt, but really started digging* it after the film (even though it was mostly shot in Morocco).  And since the characters took a boat on the river, I wanted to do that, too.  Silly, I know, but fun. 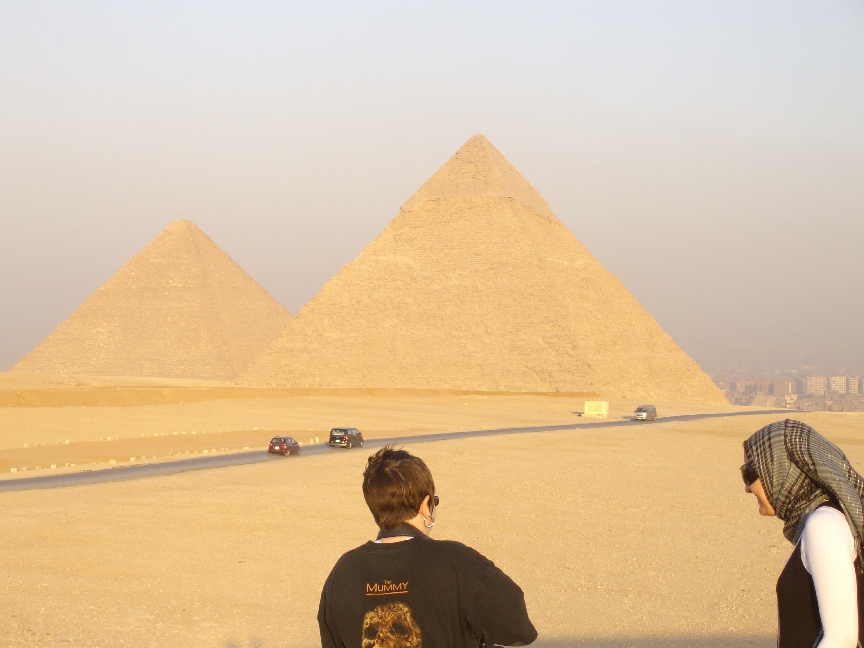 Yeah, I'm that much of a geek.

I wore my crew shirt the day we went to the pyramids and, instead of my fancy-schmancy Tilley Hat, I wore my crew hat on the trip, too.  It has a nicely embroidered scarab on the front (see below). 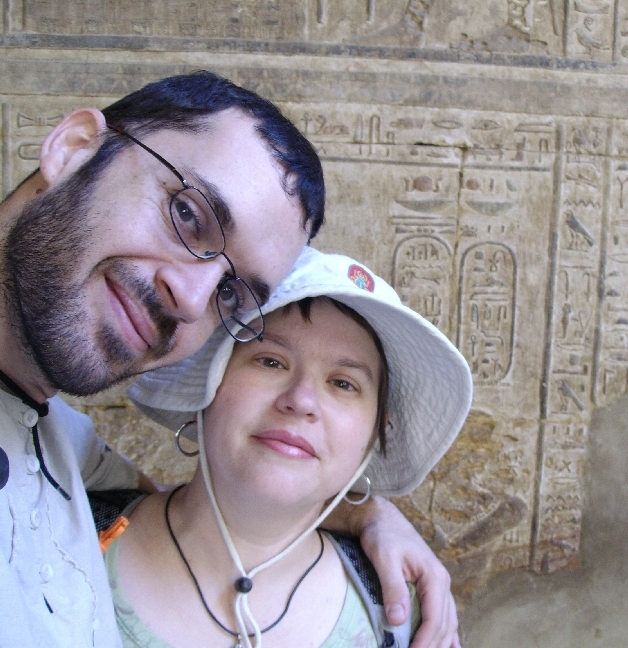 That's a self-taken photo at Edfu.  We like doing this.  Our guide in Cairo was a bit baffled when we declined her offer to take our picture at the pyramids.  We have a tradition of taking goofy self-portraits and are building a nice collection of them.  ;) 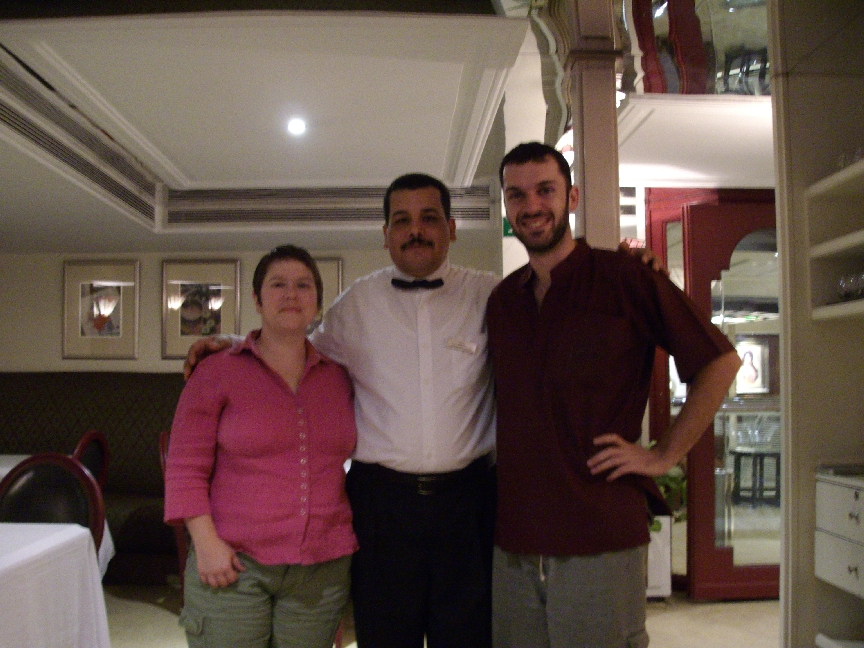 Me, Mena, and Dario in the dining room on the ship.

Despite the circumstances (i.e., our self-imposed, itinerary-based imprisonment), Dario and I both managed to meet and connect with real, everyday folks who are just doing their best to live, work, and get along.  Mena was one of these people. He was the server for our table on the ship.  When he wasn't too busy, we chatted with him, asking him questions about his family, did he enjoy his work, etc., etc.  We found him to be shy, but very warm and genuine.  He confided to us that he was leaving soon, to join his brother near Milan, in hopes of better work to support his family.

We gave him our contact information and got his, and offered to write him a recommendation letter while he sought work in Italy.  We also told him to please come visit us in Naples.  He is working in Italy now, though we didn't manage to connect while we still lived there.  His wife and two children are back in Egypt.

I've been thinking about Mena a lot in light of the news of protests, violence, and communications blackouts in Egypt.  Tonight I sent him a text and asked how his family is, and if he'd been able to reach them.

"They are fine, but its too mutch bad. we ask god to make some thing to save egypt from this big problem. pray for us. thanks for ask."

I replied that I would pray for him, his family, and all the people in Egypt.  And I will.

I have also been signing every petition I can to help get communications back online.  I never know if online petitions have a real effect or not.  I'd like to think so.  I just don't know what else I can do.

If you're interested in the petitions and other actions you can take, here are some links:

— Access Now aims to get the telecommunications companies who caved to the government's demands to stand with the people and support freedom: https://www.accessnow.org/page/s/GetEgyptBackOnline

— If you are tech-inclined, Access Now also has links that allow you to donate your unused bandwidth and IP address using the Tor anti-censorship tool.

We stand with the people of Egypt in their demand for freedom and basic rights, an end to the crackdown and internet blackout, and immediate democratic reform. We call on our governments to join us in our solidarity with the Egyptian people.

— Change.org has a petition: http://www.change.org/petitions/support-the-peoples-revolution-in-egypt-

– Google and Twitter teamed up to offer "speak-to-tweet service": http://googleblog.blogspot.com/2011/01/some-weekend-work-that-will-hopefully.html

We worked with a small team of engineers from Twitter, Google and SayNow, a company weacquired last week, to make this idea a reality. It’s already live and anyone can tweet by simply leaving a voicemail on one of these international phone numbers (+16504194196 or +390662207294 or +97316199855) and the service will instantly tweet the message using the hashtag #egypt. No Internet connection is required. People can listen to the messages by dialing the same phone numbers or going to twitter.com/speak2tweet.

ps: Most bloggers advocate writing "evergreen" content that is relevant no matter how long it's read after the fact.  I hope this post will be outdated soon and peace will return to Egypt. 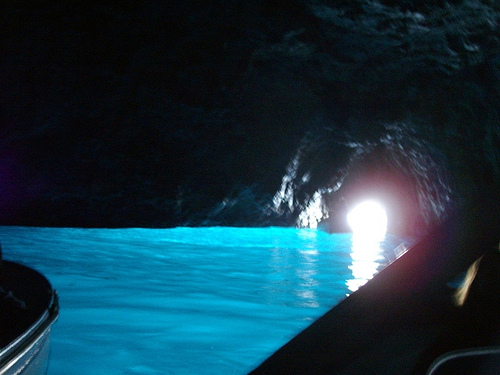 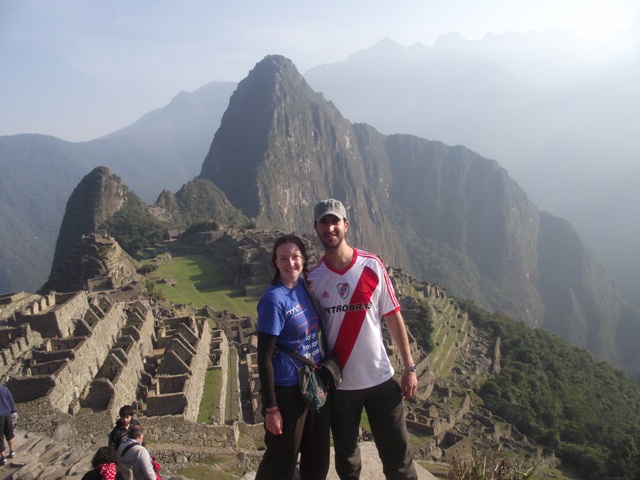 Friendship on the Inca Trail