The Isle of Skye, with its sweeping, dramatic views, is peppered with hidden corners of delicate beauty.  Many of these places, whether reflecting the actual beliefs of locals or just fancifcully named for tourists, carry the word "faerie" (or fairy) in the title.  There are the Faerie Pools, the Faeries' Bathhouse, and the Faerie Bridge, to name a few.

Some of these places – the Faerie Bridge, for example – would not likely stand out to the casual visitor.  Others, however, are so unique and distinct that one would be hard pressed not to believe in the fair folk.  The Faerie Glen is one such place. 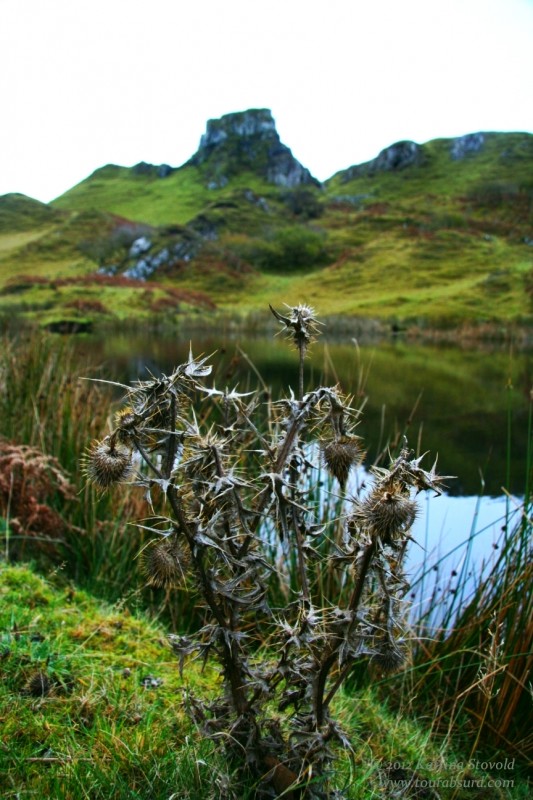 This little glen near Uig Bay appears to have a distinct geology.  There are many pointed knolls, a small pond, and several bits of interesting rock formations poking through the green.  Unlike the surrounding hillsides, the area is mostly free of broom and gorse.  Delicate grasses and moss are common, giving the appearance of a bright emerald carpet.  There are rowan trees, said to possess many magical properties, along the edges of the road.

As you may have guessed from my rather more factual and less silly than usual description, I was quite taken with the place (ok, it's also first thing in the morning as I write this – still waking up).  I'd love to go back and photograph some more.  More daringly, I would like to get permission to camp there overnight during a warmer season.  Who knows what sorts of mischief one might get about?

The rock formation that makes up the backdrop of this photo is known as the Faerie King's Castle.  A very small part of me did think of Close Encounters when I saw it, but was quickly shushed by the other parts of me that were looking around in wide-eyed delight.  The castle is reachable by a winding, picturesque path around the back.  Some creative contortions are necessary to get to the top, but it's worth it, if only for the chance to say you've done so.

As you may or may not know, the thistle is the national symbol of Scotland.  It goes back to a battle where Viking invaders, in a plan to ambush a sleeping band of Scotsman, foolishly attempted to sneak through a field full of the prickly things.  The noise and their cries of pain gave them away, and the Scots were able to prepare for and victoriously counter the attack.  The thistle has been venerated ever since.

In an extract from The Answer, to the Guidwife of Wauchope-House, Robert Burns demonstrates this love of an unlikely flower:

The rough burr-thistle, spreading wide,
Amang the bearded bear,
I turn'd the weeder-clips aside,
An' spar'd the symbol dear.
No nation, no station,
My envy e'er could raise:
A Scot still, but blot still,
I knew no higher praise.

I'm still in Scotland as I write this.  Alas, no longer in the Highlands, but this and many other photos are drawing me back.  My heart is still there, in any case.  I suspect the rest of me will be back soon.

What magic are you discovering?

Thank you, once more, to Rabbie's Trailburners for arranging this wonderful tour.

11 thoughts on “Featured photo: Thistle in the Faerie Glen”