Living in Naples gives one all sorts of opportunities for adventure, eating, and uber-tourist activities.  A travel outfit affiliated with my employer had a day trip heading to Capri, so I joined in.  Since I lived within walking distance of the airport, I *could* have just taken the Alibus down to the port and found myself a cheap boat ride over, but at the end of a long week of getting yelled at over the phone for network policies that I didn't create, well, sometimes it's nice to just let someone else do the driving. 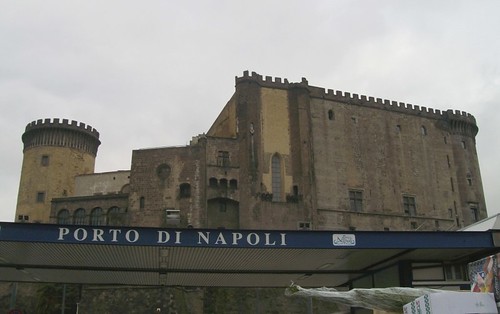 Having lived in Europe for a little while now, I am actually starting to (just barely) take castles for granted.  Back in the US, the closest I got was Disneyland.  Over here they are THICK!  Can hardly turn around with bumping into a castle, sheesh.  Someone ought to clean these things up. 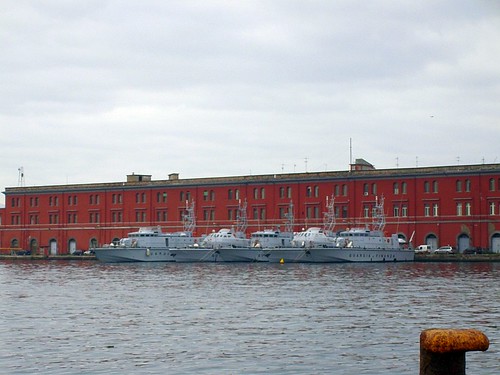 As we waiting to board our boat, we spent some time meandering around the port a bit.  One of my favorite things about the Port of Naples is the castle.  Another is the diversity of boats and ships.  Everything from leetle rowboats to military ships to monstrously huge cruise ships!  Even cooler, though, are the old guys who walk around with snack carts (I like snacks).  They have fresh coconut!  It's pieces of white coconut meat, kept moist in running water and served in little cones of paper.  So awesome! 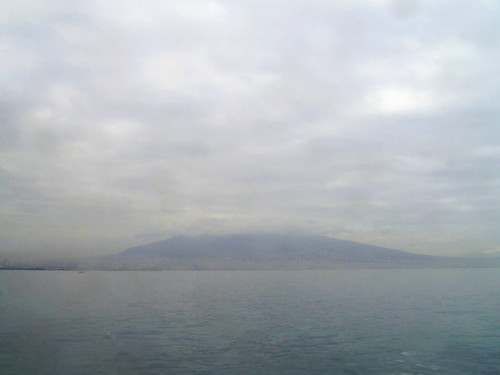 Vesuvius from the water.

I think one of the Plinys had a view like this when it erupted in 79 AD. 'cept it was clearer. And things were 'sploding. And people were panicking. Ok, so not very much like this at all, really. 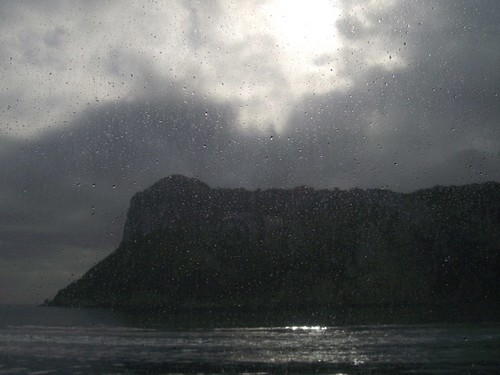 The weather was not great and the crossing a little rough.  My first view of the legendary island was not encouraging, but I had faith!  Only 2 more boat rides to go to the Blue Grotto: one to get to the entrance and one to get inside.

Despite being one of the first groups off the boat, our tour guide, Aldo, had everyone step to the side on the pier.  He is a third generation Neapolitan tour guide (with a degree in Chinese art, I believe!) and has the most amazingly gentle, articulate way of explaining things.

He had seen several groups of Japanese tourists on our boat.  He told us that, any minute, there would be a rush of Japanese people running to the next set of boats "…and we can't compete with that," he said with a smile.  Within seconds of his pronouncement, two girls (presumably Japanese) were running flat out along the pier.  They were soon followed by more people from the same group, pelting past in rapid succession as if competing for an Olympic medal.  Within moments, the first boat left the dock, filled to the brim with a cheering group of Japanese track and field stars.  Well, they must have been, after the performance we saw!  Wow.  Being first is important, I guess. 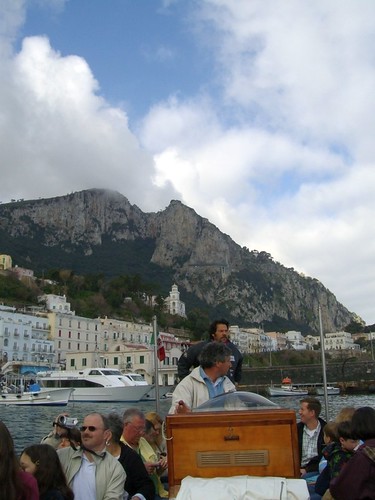 We ended up on the very last boat to leave for the Blue Grotto, the Carmela.

The Gilligan's Island theme was playing in my head. We, however, had the opposite weather situation that the Minnow did. Indeed, the Carmela started with clouds and rain, and ended up with sun, whee! 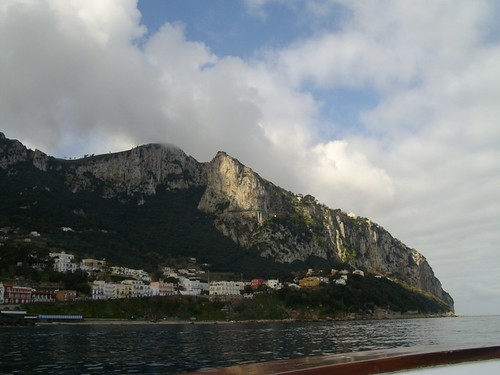 Sun breaking over the headland.  Come on sun! 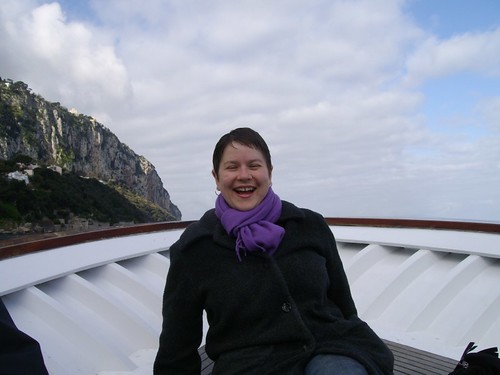 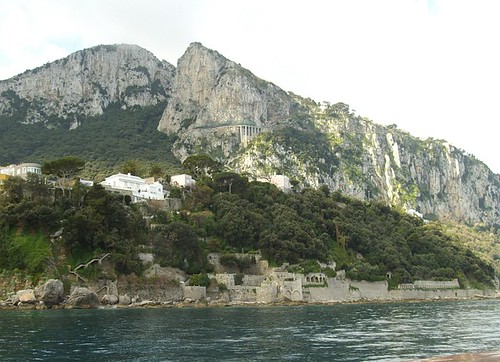 Ruins below, ruination above.

All kinds of random ruins, interspersed with luxury villas, could be seen along the water.  Looking up, you can see the scarynarrow (that's a new word, thankyouverymuch) highway hugging the cliff above.  I didn't have the pleasure of exploring it this trip.  On a later trip with Dario, we took a bus and stood in the well by the double doors when a more squeamish traveler vacated the space.  We could look over the edge of the road and straight down the cliff.  Free adrenaline rush! 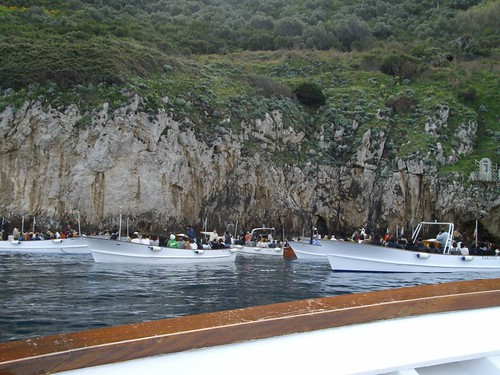 Traffic jam at the Blue Grotto. 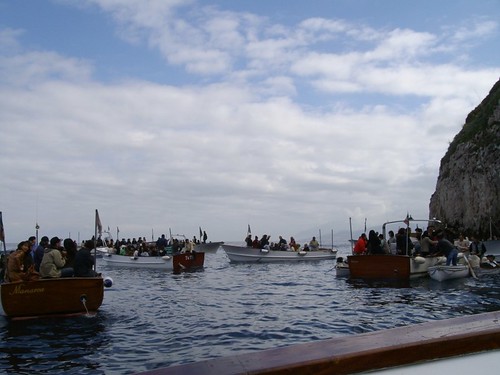 Gosh, look at all those Olympians!

There's a chance that you might pay to go all the way out there and then find the seas too rough to enter.  That's why they break the ticket into 2 parts — one for the medium sized boat to get to the entrance, and another to have a rowboat pilot guy take you inside.  Since we were last, it was good to arrive and see so many excited people hanging out.  Sad faces and boats turning back would have been a bad sign!

You can also get there by bus and steep hike.  Then you'd only have to pay the rowboat guy.  I really enjoyed the boat ride out, though.

The intricate dance of getting into and out of La Grotta Azzurra. (Watch on YouTube.)

I'm glad we got there last.  Gave us plenty of time to watch the process and figure out how things worked.  Also gave the sun time to come out, which is incredibly important for viewing the dazzling blue that gives the place its name.  I feel a little sorry for the people who rushed out there!

I really wanted to title this post, "Drunken Caterwauling on the High Seas,"
but didn't think that was fair to the boat guys.  (Watch on YouTube.)

In addition to rowing you into the Blue Grotto in a teensy boat, the pilots treat you to a personal serenade.  If there was only one singer belting out a song at a time, it might have been quite magical.  With 5 or more + echoes, however, it's actually a little creepy.  The discord puts me in mind of psychological thrillers where a person starts going through a breakdown.  "Aughh!  Too many voices!  Make it stop!" 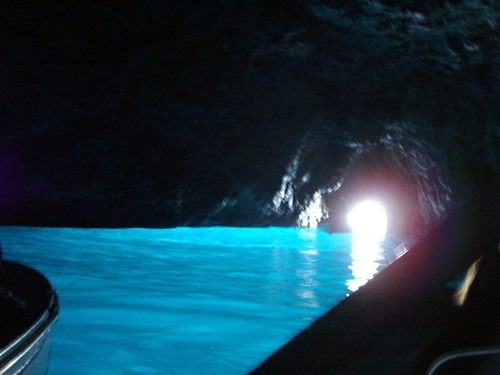 …aaaaand there it is!

Yay for slowpokes!  If we'd gotten there too soon, there would have been no sun reflecting off the sea floor.  And might I just say: Wow! 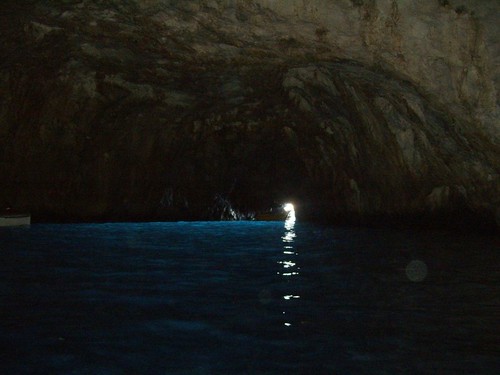 Our only hope for escape!

We rowed further and further from the entrance, a shrinking pinpoint of light in the distance.  Oh, nooooeeees! 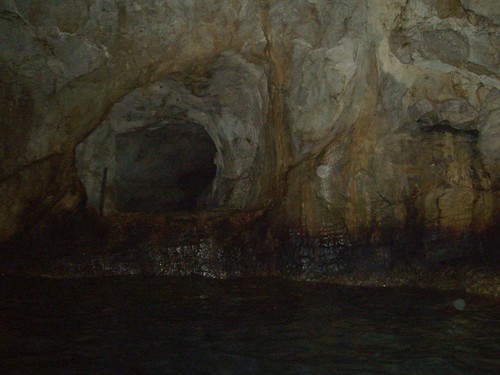 Oh, I guess I forgot about this bit.  It's said ancient Romans (that is, Romans in ancient times, not elderly people from Rome) used the inside entrance from a castle or villa above.  They came down to swim and luxuriate and generally be Roman.

I suppose it makes sense that the rowboat side isn't the only entrance.  After all, my ears weren't popping every time there was a surge in the tide.  I heard you have to get special permission to use the inside passage these days, though.  Too bad!

Mini jellies! …Cute because I'm not swimming. (Watch on YouTube.)

All the way from the harbor we saw a jellyfish INVASION!  Teeny tiny little jellies, everywhere you look.  Cute!  …and yet another reason to keep your hands in the boat.  ;) 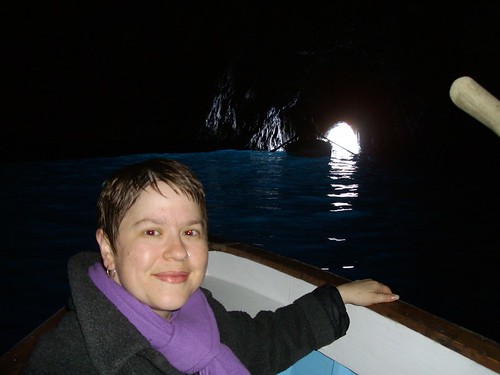 I'm still on a boat!

There's me.  Just in case you had any doubts that I was actually there.  In a boat.  Also, this picture provides a nice sense of scale, if you allow for my petiteness.  (Photo taken by singing rowboat guy.)

And EXEUNT!  Whew!  Made it out and will live to blog another day!

Really, it was tons of fun.  Questionable weather that turned sunny, adventurous boat transfers, the great glow of the sea floor inside the cave, and even the "caterwauling."  Some people claim the grotto itself is overrated, but the entire experience put together was great!  If you go to Naples, don't miss it!

Have you been on any seaborne adventures lately?

Quote: …the myriads who Before us pass’d…