I generally prefer chocolate frosting, though an occasional cream cheese-based confection will really get me.  And while I have been slowly introducing Dario's family to some of my favorite American foods – stuffed chicken, pancakes, creamy salad dressing – we still haven't mastered frosting.

Part of the problem is that zucchero a velo (powdered sugar) isn't readily available at most grocery stores.  Dario made a lovely chocolate cake for us one evening, but the butter cream frosting ended up being more butter crunch since all we had was granulated sugar.  But sometimes you get lucky and the frosting comes to you. 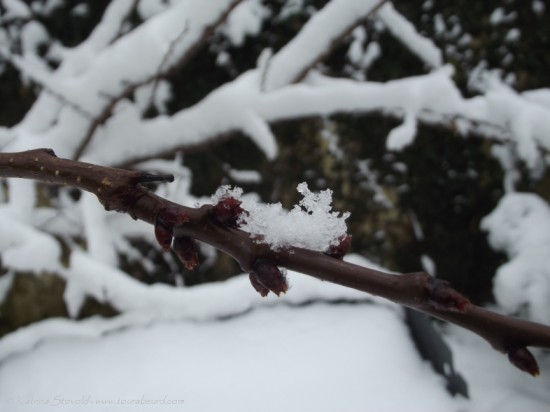 Aww, yeeeah!  This is why we left Ireland this winter – Italian sun!

Ok, admittedly, this is a different kind of "frosting", but for two weekends in early February, Rome was hit by snowstorms.  Snow!  In ROME!  How weird is that?

Some areas of the center and suburbs were locked down, no driving permitted, and some were even without power.  I desperately wanted to get downtown and see the Colosseum looking like a hive for flying reindeer, but the first time it happened we were stuck – no driving and too far from the metro.  Buses were not running, either.  A tragedy beyond imagining!

On a clear day you can see St. Peter's from here.  No, really.

A photo that started making the internet rounds shortly after the first flake hit only served to fire up my determination to get downtown.  It shows a woman holding a red umbrella walking toward Il Colosseo in the snow.  The owners of the copyright want €50 to post it on TourAbsurd, so I'm just going to provide a link to where you can take a peek, an article about the Russian gas shortage, second photo down.  Go look — it's a work of art.

Unfortunately, no matter how much I wanted to go, it just wasn't happening.  On the other hand, we had tentatively been planning to head up to the mountains with Dario's sister and brother-in-law to take our niece to the snow for the first time.  It was going to serve the triple purpose of sharing a touching family moment, lobbing snowballs at Dario's face, and giving me a chance to review some snow boots I'd been sent by Nature Shop.  Snow had arrived rather late in the year at the nearest ski resorts, who were using snow machines on their slopes, so I kept sending apologetic / hopeful emails explaining that we'd go as soon as nature cooperated.  (Yay!  Review complete! :) 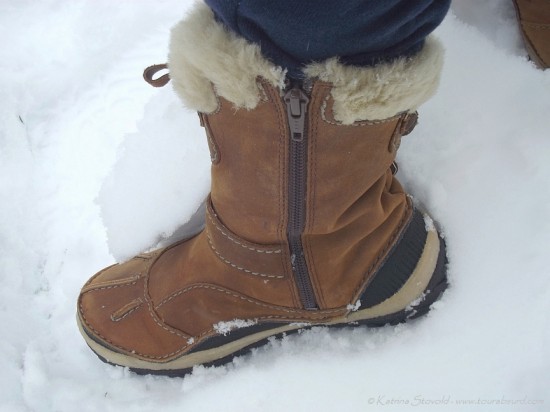 While we could not find a way around the driving ban that first weekend, we did have a lot of fun around the house.  Couple of quick snowball fights in the yard, the critters got to see snow for the first time, and we all got toasty around the fire afterward.  Groceries were a bit short (except for pasta, of course), but because we had electricity and internet, the whole thing was a lot of fun: snowed in during the Great Roman Cold Snap of 2012! 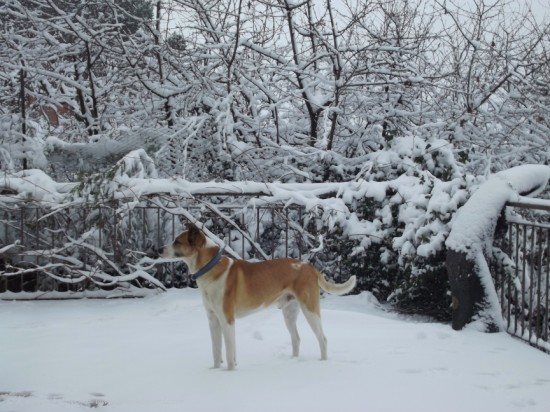 Later in the week, with snow still on the ground, we got the incomprehensible news that there was going to be another snowstorm the following weekend.  Instead of driving bans for the next round, however, Italian officials announced that restrictions were planned.  Only cars with chains or snow tires would be permitted to drive.  We stocked up on groceries and Papa managed to get some chains for the wee family car.  This time I was NOT going to miss out on snow at the Colosseum! 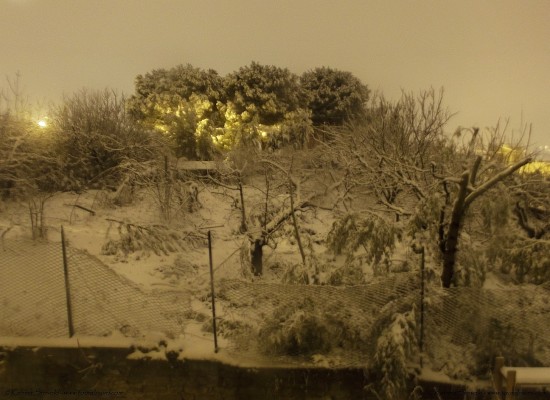 The weekend rolled around and the first snow hit.  I woke up at 2 a.m. to look out the window.  Not only had it snowed, but there was the promise of more, with an eerie glow in the sky as city lights reflected off ice crystals in the clouds.  If only we could get downtown before it melted!

Getting out of the house the next morning was a bit of a chore, but not because of the snow.  For one thing, Italians do, as rumored, like to chat.  A LOT.  And about everything.  I reconsidered the wisdom of introducing Dario and his parents to the Blarney Stone as I watched the snow melt away.

For another thing, it hadn't occurred to me that this might be the first time anyone in the family had put chains on a car.  Glad I'd spend several years in Washington state and had learned a little bit about the procedure.  With some readjustments, grunts, and cold hands (mostly Dario and Papa's), the hubby and I managed to get on the road.  The weird thumping hum of driving with chains on streets that were, for the most part, quite clear intensified my anticipation – and my concern. 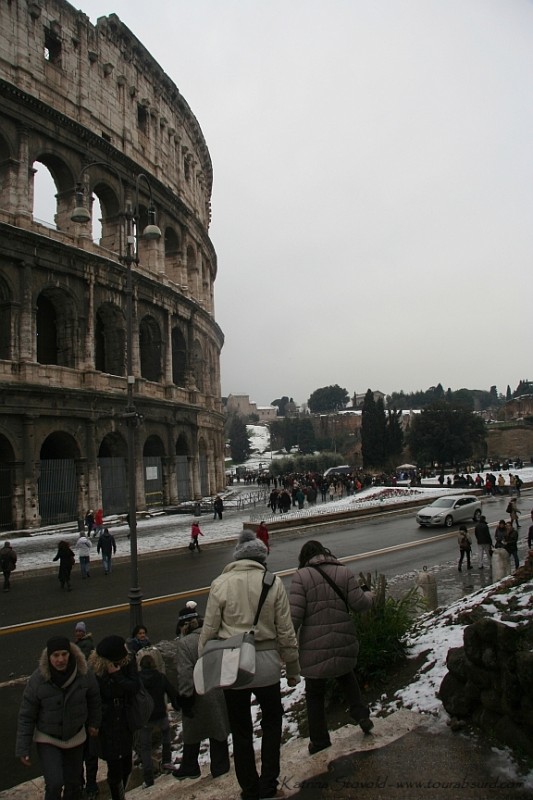 Does not seem to have put a damper on tourism.

As we approached the much venerated monument, I was both relieved and disappointed.  Relieved that we'd made it in time to see some snow, but disappointed that it was in the process of melting away.  More snow was forecast for the day, so I crossed my fingers and hoped it would happen while we were still around to see it.

We decided to shoot some photos and take in the sights of the nearby Roman Forum, Capitoline Hill, and Trajan's Market.  Both the Colosseum and the Forum were closed, a bit of a financial misstep on the part of the government, I think, considering how many tourists were still buzzing around with wallets in hand.  Still, some interesting views were available. 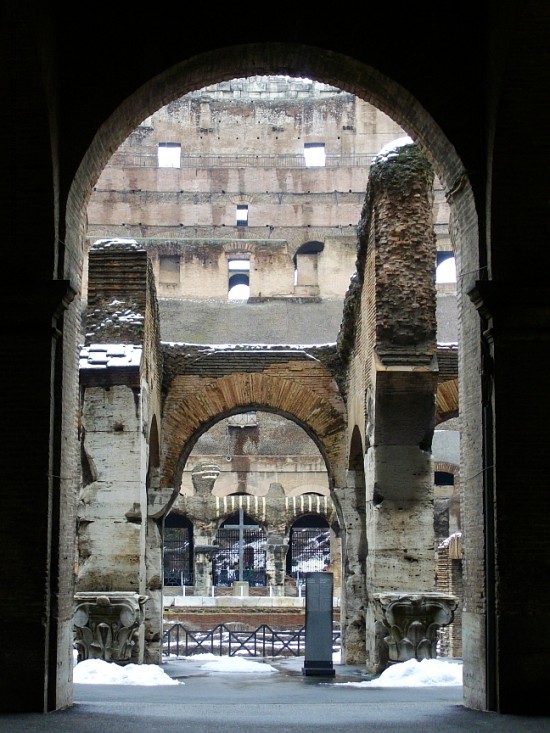 Sticking a camera through the bars luckily did not result in a gladiator chopping off my arm.

Sadly, the freshly charged batteries of my Canon seemed to be allergic to cold and fizzled after a handful of shots.  But don't you worry – I had my trusty point-and-shoot! 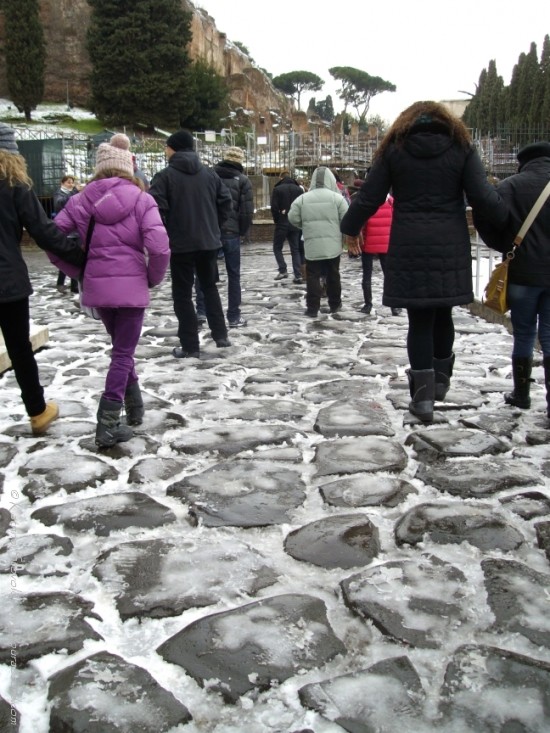 Giant, icy paving stones, aka, "a death trap", next to the Arch of Constantine. 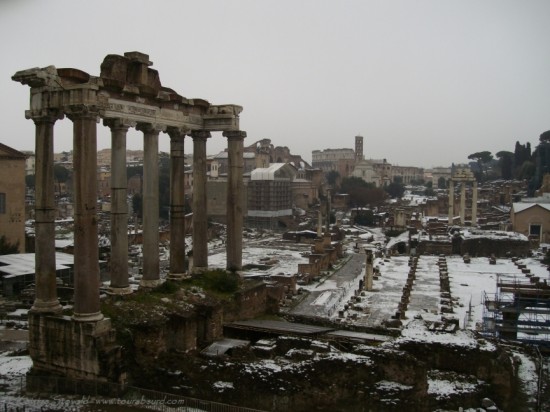 Roman Forum, as seen from Capitoline Hill.
Colosseum is all, "Hey, guys!  I'm in the back row!"  Shush, Colosseum. 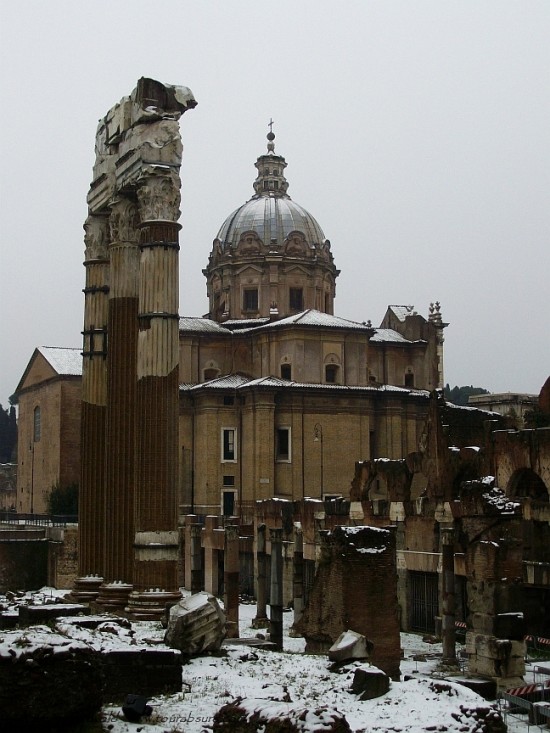 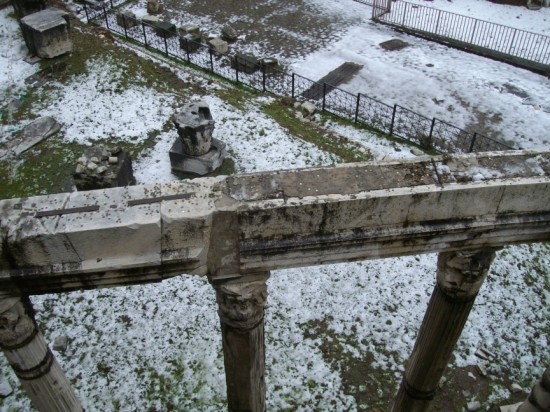 Tourists do the darnedest things!

While standing on Capitoline Hill, basking in the wonder of history and feeling small in the face of the giant accomplishments of Romans past, I noticed that a lovely marble crossbeam had apparently become a carnival game.  "Toss a coin, win a prize!" ('cept, in Latin) must have been carved somewhere that I couldn't see.  I wonder if the prize was a spycam.  If so, I'm totally down with that. 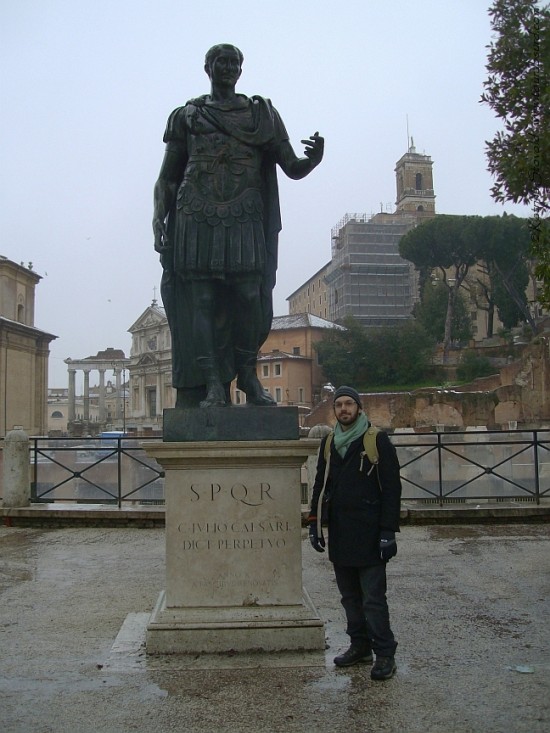 The temperature had been slowly dropping as we made our way around the area.  It also started to drizzle lightly.  Poor Dario, even with his experience living through an Irish winter, he was not prepared for the cold.  Still, we took a moment to hang with Julius Caesar before heading back to the Colosseum.

…And then it happened! 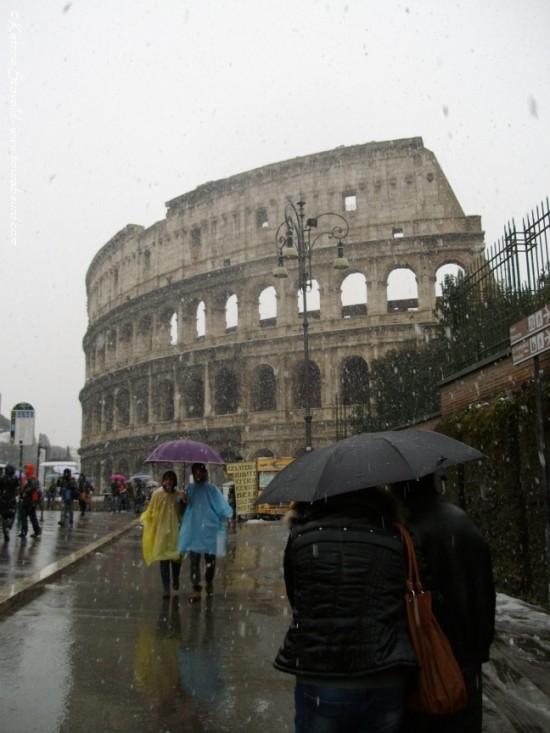 Poor Dario was ready to curl up and die by this point, but I was ecstatic.  Mmm…  delicious frosting.  Getting to see snow at the Colosseum – so fantastic! 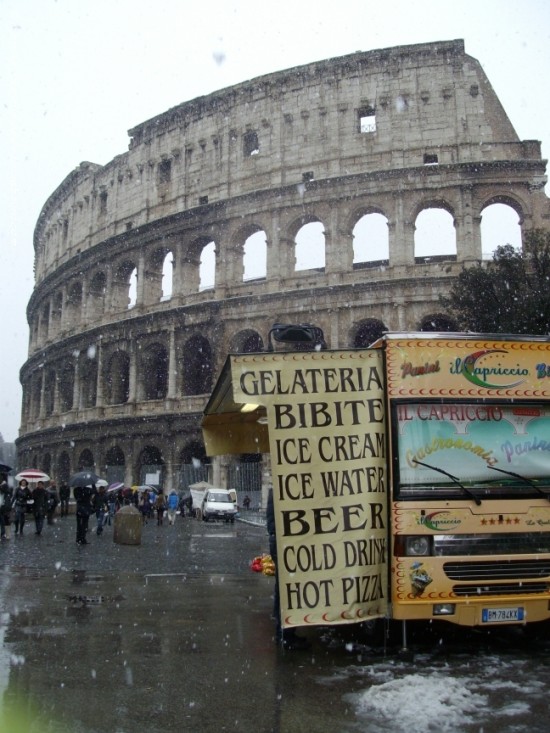 Ice cream.  Just what I wanted.

I didn't manage to get any awesome magazine-worthy photos, but I did find a bit of sweet irony in the juxtaposition of the food vendor's stand and the snowy monument.  Ice cream, ice water, cold drinks – PERFECT!

Can't see the video?  Watch it on YouTube: http://youtu.be/ZiWlPgO6H-Q

…And just to provide a little further evidence that this whole encounter was not in any way the result of photo manipulation, here's a bit of handheld video action.  Just a simple scan of the Colosseum, the Arch of Constantine, and me trying not to move in sync with an inconveniently positioned umbrella vendor.  Still, I was in heaven.

Sometimes heaven is just getting what you want.

Before Dario could turn into an Italian-cicle on me, we made our way to a nearby Chinese restaurant to eat and warm up.  Sadly, the food did not taste of heaven, nor even China for that matter.  We did not stay to torture ourselves with dessert.  Our favorite Indian restaurant was half a block away, so we popped in for a quick gulab jaman and chai.  We were back in heaven.

We made our way to the car, remembered sadly that the car does not have a working heater, and thump-thumped our way slowly home.  Dario's toes were lumps of ice, poor guy.  (I used to be really susceptible to cold, but living in Washington and Ireland – ok, and gaining a few pounds – has helped me handle the cold better.  Also, I had on my rockin' snow boots!)  However, lest that ending to a day of historical coolness leave you cold, let me reassure you with this photo, friends. 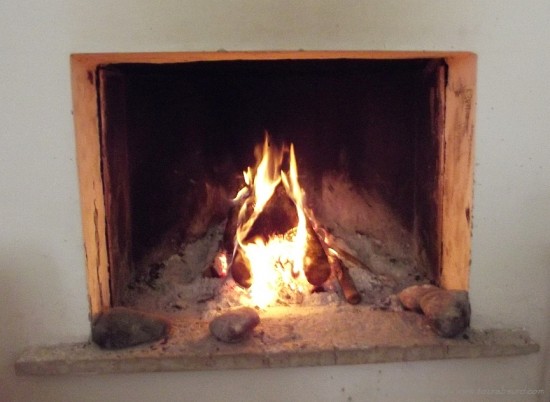 Feeling warmer just looking at this.

We arrived at home, chilled but triumphant, and sat down with the family in front of the fire.  We set our wet coats and scarves on the radiators and shared a few photos.  We regaled them with our tales of harrowing journeys, closed monuments, and inclement weather.  Dario even regained feeling in his toes.  …Heaven again.

How are you keeping warm?