Throughout these days of protest and confusion, I have heard many interesting comments, read news heartening and sad, and chuckled in both a-musement and be-musement over some of the confusion non-Egyptians were expressing.  These are heady times, my friends.  The giddiness seems to be affecting people in many different ways! 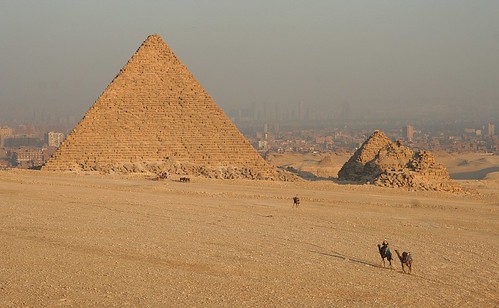 Giza, Egypt.  Camel owners heading into the city to sleep after a hard day of tourist-catering-to-ness.

Let's start with a facepalm moment, shall we?  When I heard the news that Mubarak had stepped down, I immediately emailed Dario at work.   He emailed back, "Yay for Egyptian people! :DDDDDD"

Two minutes after that, he emailed again.

(Though, in reality, many pharaohs did start out as military men.  I suppose you could say Mubarak is following in the footsteps of his forebears.)

Since January 25, I have been riveted by the scenes unfolding in Egypt.  I find myself committing that most human of errors and assuming everyone else feels the same way I do.  Apparently not!

Just the other night, however (Thursday, the day Mubarak said he'd be staying until the September elections), we went out for dinner.  Our server, a very nice Italiana we had chatted with before, said something I'd been thinking rather guiltily: "I wish I was in Egypt right now, taking part in the protests!"  Wow, just typing that gave me a thrill!  Seriously, this is world changing.  Who wouldn't want to witness history?

Folks back in the US, I hear, are not as impressed as I.  There is confusion about why the protests started, who this Mubarak guy is, and what is the big deal anyway?  Just a bunch of folks far, far away from here, doing something that doesn't affect whether or not I can get my Warcraft on tonight!  (Please know that I am a WoW geek myself, so I say this will all due respect.)  Indeed, Fake Dispatch tweeted:

BREAKING: To make it an easier to understand revolution, Anti- and Pro-Mubarak groups put on Team Edward and Team Jacob shirts.

Ok, just in case you don't know what the dealio is, I'll sum it up:

Once again, I sent an SMS to our friend, Mena, telling him how happy I am for the people of Egypt.  Despite having to fight an Italian keyboard at an internet cafe to respond, he got back to me on Facebook:

Thank you very much and I hope to continue in your prayers all the time for my live andnew live in Egypt. For God makes a good start and the new Government of egypt will make agood thangs for Egypt.

Ok, look, I'll say it right now: I'm a big crybaby.  All the news out of Egypt in recent days, good and bad, got me teary-eyed pretty often.  Sometimes it was about the violence and the deaths, but most of it was for the determination, bravery, intelligence, and kindness of the people protesting.  And this doesn't even begin to scratch the surface of the amazing interfaith demonstrations of love and support.  I can only imagine, and very poorly at that, what Mena and his family must be feeling.  And yeah, I get teary thinking about it.

For those of you who follow TourAbsurd on Facebook, you may have seen the story I linked from Teaching Traveling by ShiSha, an American student from Boston who went to study in Egypt.  She recently wrote a follow-up article that you really should read.  She was there at the beginning of the protests and saw first-hand what was happening in the center of Cairo.  Ok, another turn-on-the-faucet moment was when I read this:

What makes this protest so great to me is that it is middle class people and upper class people, fighting for the lower class. Peasants don’t have Internet at home. They couldn’t have organized this on Facebook. These are the educated men and women of Egypt fighting for their God-given rights. I have never seen anything like this in my life.

Go read the article.  Really, you must: http://www.teachingtraveling.com/2011/02/12/shisha-a-boston-student-sees-egypt-protests-first-hand/

If all that seems too heavy for you, never fear — Wavy Gravy is here!  On Saturday, the Saint Misbehavin': The Wavy Gravy Movie page on Facebook posted:

I'll throw my hat into the light-hearted ring and say I hope the awesomeness of that famous song from 1986 reigns longer than Mubarak did.  Long live The Bangles!

Wow.  A peaceful protest that wouldn't quit.  Fantastic!  Hope is alive and change is possible.