Living in Naples, as with any big city, has its ups and downs.  For an introvert like me, one of the downs is the sheer mass of people everywhere you go.  Still, it can be invigorating at times – like when you’re on the road.  It frightens most non-Italians, but I LOVE it.  When you think things are going to be unpredictable, you pay more attention, no?  I felt safer on the roads with the millions of Neapolitans who drive like maniacs than I ever did with the Washingtonians who assume everyone will stay in their own lane and follow all the rules.  Means people have skills, man!

What is it about me and islands?  I just love ’em!

One of the other big “ups” is, of course, the pizza.  Another is easy access to Pompeii, Herculaneum, the Amalfi Coast, Vesuvio, and Capri.

Capri is not exactly a backpacker’s paradise.  In fact, it’s one of the spots that celebrities almost always visit if they pass through southern Italy.  The place is chock-full of boutiques, ceramic shops that ship anywhere in the world, spas, and restaurants.  On the other hand, most of the restaurants I’ve been to, despite their tourist menus and tourist prices, actually serve yummy food.

Side note: a tour guide told me that the most expensive hotel on Capri, a favorite of the rich and famous, does not include breakfast with the room price.  What’s up with that?!?  Why is it that hostels give you free wi-fi, but hotels with rooms that cost enough to feed a small nation for a year charge you?  The craziness!

But onward to The Three And A Half!  The first one is a bit of a “gimme”, as they say.  It is the venerable Blue Grotto, aka, La Grotta Azzurra.  I know I’ve talked about it before, but I’m surprised at the number of folks who go to Capri yet don’t take the extra step to see it.  There’s always a chance that weather and tides would prevent a visit, but to not even attempt it seems silly.  It’s just so beautiful!

If you’re not up for riding the entire way there via boat, you can also take a bus and walk down.  Once you reach water level, you’ll still have to get in a boat, but trust me, it’s worth it.  You get a free serenade, too. 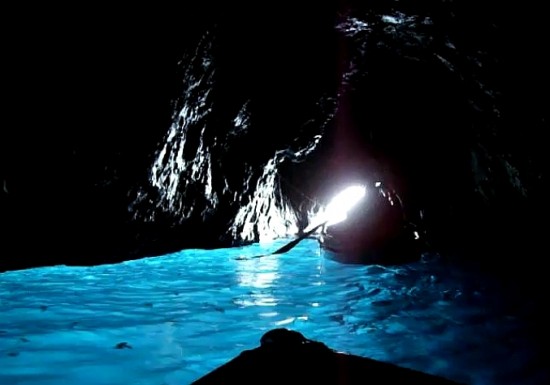 Really, if you travel all that way, do yourself a favor and go see it.  Too amazing!

It reminds me a bit of the Pirates of the Caribbean ride at Disneyland (pre-movie franchise), except when they tell you to keep your hands and arms inside the boat, they really mean it.  You have to duck or lay down in a little rowboat to get in and out.  If you have a hand outside the boat, you won’t get a little warning alarm and a recording reminding you to follow the rules, you’ll get a nasty pinch or worse.  So many things about Italy are great like this; they really expect you to take care of yourself and not be an idiot.  Travel without insulation – love it! 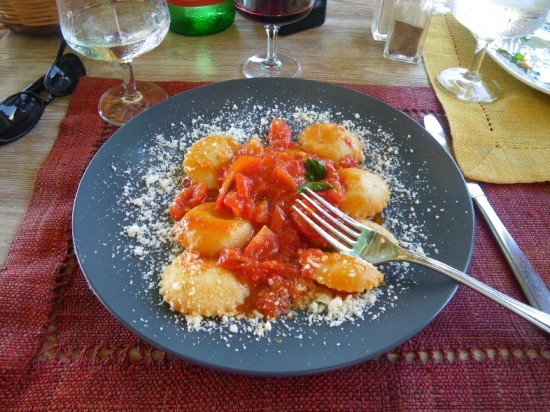 There is no reason for this photo other than that I think it’s pretty.  I re-discovered it while going
through my pictures of Capri and thought you’d like it.  Oh, and yes, it was delish.  Thanks for asking!

Activity 2 is something that requires motored transport to reach.  The comune (municipality) of Anacapri is one of the two main towns of Capri, the other being the city of Capri.  There are taxis and buses that go between the two.  The roads are narrow and the turns sharp, so the buses are small.  In fact, I would go so far as to say that the bus station is worth a visit just to see the cute, tiny buses!  The parking slots would probably fit a large American car, though it is doubtful that such a vehicle would be able to navigate the wee roads.

The ride is not long, but for those afraid of heights, it can be disconcerting.  We got lucky on one of our trips when, on a crowded bus, the passenger standing on the exit steps (a legitimate place to stand) got too freaked out by the vertical views down to the water.  I happily took her place and enjoyed the thrill of looking straight down to the surf splashing against the rocks.

That being said, it’s quite easy to avoid looking down, so one needn’t obsess over it.  However, if heights aren’t your thing, you might not like the second activity at all.  You see, it’s a chair lift to Mount Solaro, the highest point on the island! 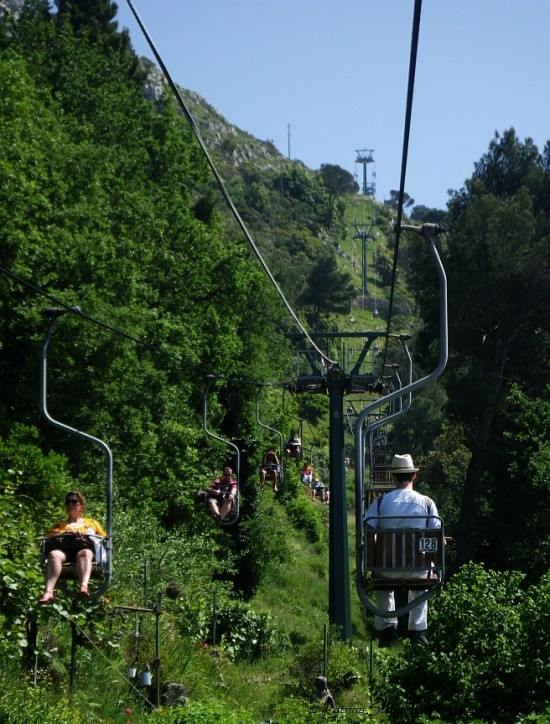 We found the ride up to be HILARIOUS.  Not only did we not get to sit together – so much for a romantic afternoon – but the strange quiet of the other passengers was surreal.  It can be hard to do deadpan that well when performing comedy, but these folks were champs!

The only sounds were the chirping of birds and the squeaking of gears when we passed a support tower.  No one was smiling or waving except us (lots of gesturing and shouting “take a picture of me!”), and the only movement from other people was an occasional quick camera snap.  Some of the property owners along the route got into the spirit of things and had bizarre displays in their yards like mannequins and signs on shed rooftops.  In between pretending to be serious, we giggled a lot and wondered why we were the only ones who appreciated the Wes Anderson-like ridiculousness of the situation. 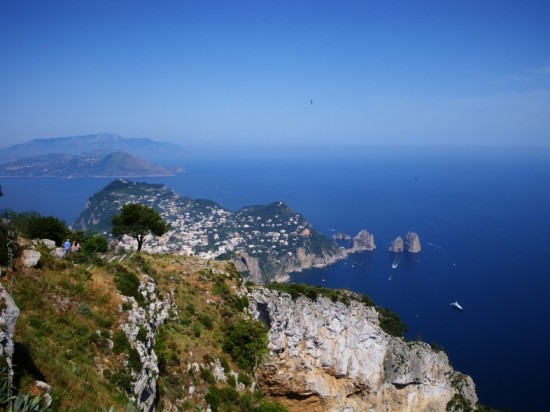 Maybe they were all worn out from being awed by the view?

There is a restaurant and a small park-like area at the top.  Multitudes of seagulls fly below the peak, their calls the only sound besides the breeze skipping through the brush and flowers.  Other than photos and a bite to eat, there’s not much to do.  But really, the views and the tranquility of the place are spectacular. 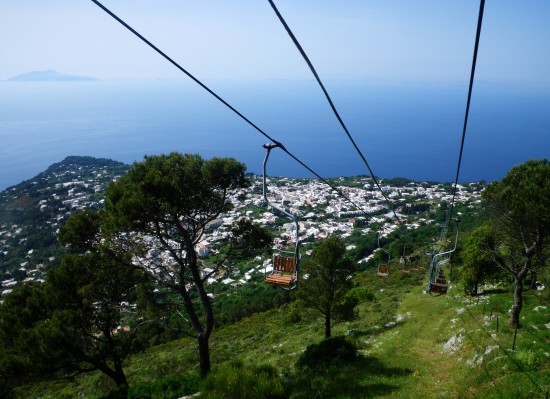 This would be even more thrilling if it was a zip-line.

It is possible to hike up to the top, but it’s not a quick trek.  The chairlift alone takes 15 minutes or so.  The views on the ride up are mainly of mountainside and gardens, though it is possible to see the islands of Ischia and Procida on a clear day over your right shoulder.  It’s easier to see everything on the return trip without getting a crick in your neck, though you have to contend with the chairlift, possibly full of unsmiling passengers – or perhaps eerily empty.

Once you return from your epic chair lift adventure, you’ll want to treat yourself to a delicious snack.  I highly recommend a lemon granita.  On a warm afternoon, it can’t be beat! 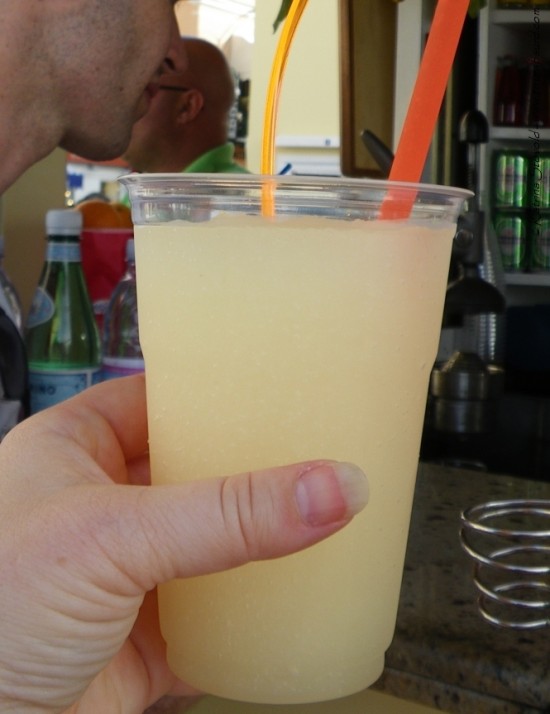 You can get a granita in several different flavors, depending on what is available at the shop.  They nearly always have lemon.  Green is probably mint, which is also great on a hot day.  If there is an orange-colored option, it may be orange flavor, but might also be melon.   Brown is usually coffee and it tends toward intense, bitter, espresso flavor.  You have to add sugar and, really, you don’t want a big cup of that stuff.  It’s too much!

Since all of the Amalfi coast region is famous for lemons, however, I suggest you try it while you have the chance.  They are amazing.  It’s no wonder that both fantastic granita and limoncello are made here!

The Third Thing is back in the city of Capri.  It is another amazingly scenic location, the Giardini di Augusto (Gardens of Augustus).  Besides being another photo spot with views of the cliffs of Capri and the cerulean waters of the Mediterranean, it’s also a well maintained botanical garden with lots of shade and benches.  If you wanted to pack a lunch instead of spending more money on restaurant food, this would be a nice place to sit and eat. 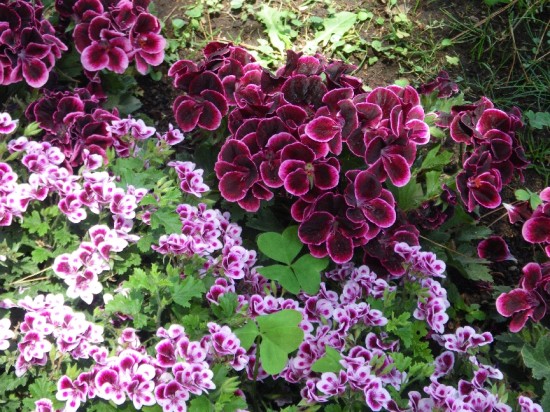 I’m a sucker for flower pics. 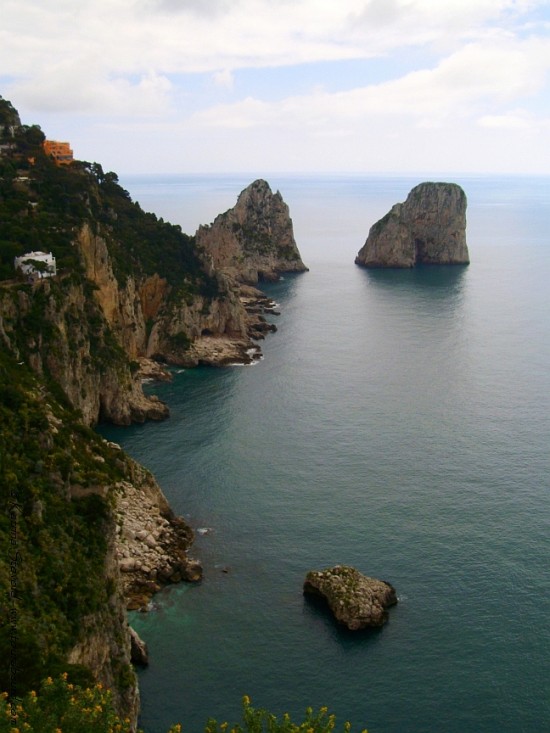 A view from the office – if you’re a gardener. 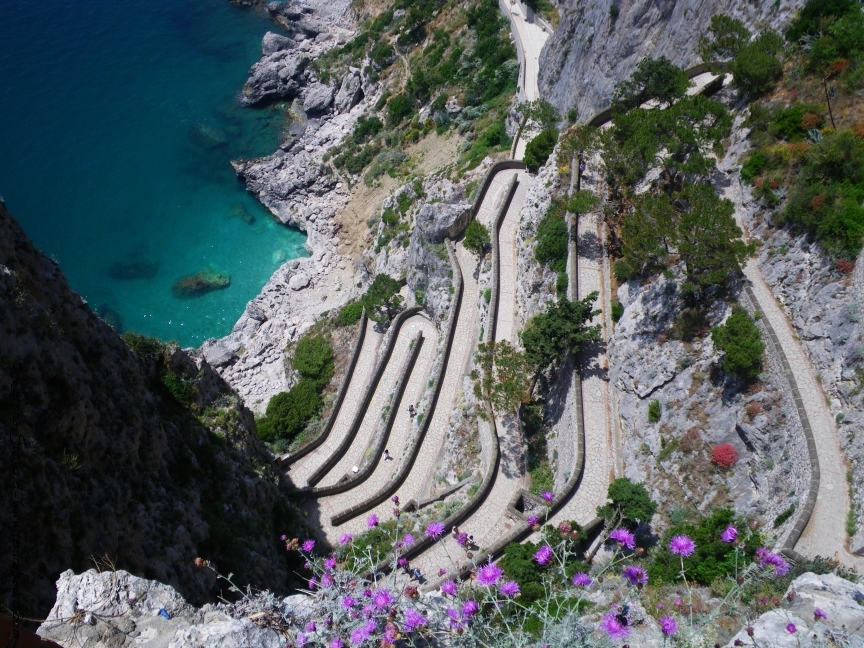 Italy has the corner on the market on corners!  (Via Krupp.)

Lombard Street pales in comparison to some of the stuff I’ve seen here. 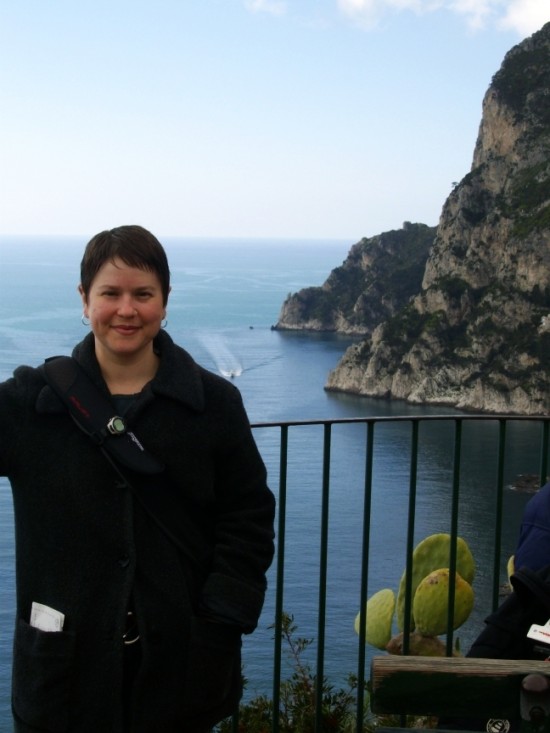 My pet boat is coming to land on my shoulder. 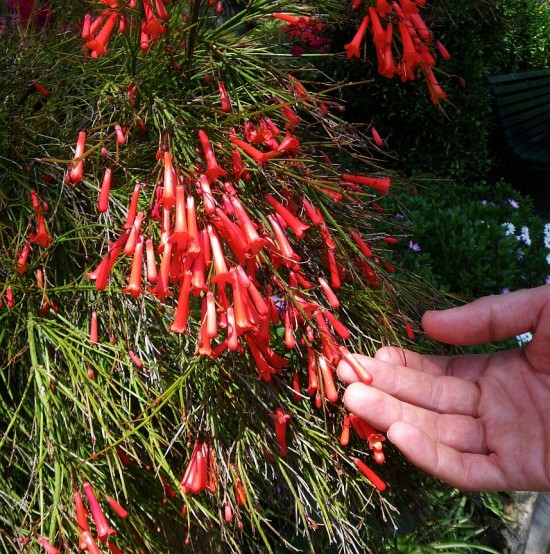 Going to finish up the garden pics with flowers again because…  it’s finally time for the “half” thing!

Yes, this is “the half“!  While any of the little food or transport interludes (there’s a funicular, too!) could have been the “half” of the title, what I really had in mind was a sweet smelling bit of history: the Carthusia Perfumery.

On the way to the Giardini di Augusto, one passes the Certosa di San Giacomo, a Carthusian monastery.  I heard a story about the founding of the monastery on my first visit to Capri.  In a nutshell, a man was praying to a saint for a male heir.  He received one, so he fulfilled his end of the bargain and built the monastery.  Seems simple enough.

But what about the profumeria?

“Legend has it that in 1380 the father prior of the Carthusian Monastery of St. Giacomo was taken unawares by the news of the arrival on Capri of Queen Giovanna d’Angio and so made a flower arrangement with the most beautiful flowers of the island. The water was not changed for 3 days and, when the flowers were thrown away, the prior noticed that the water had acquired a fragrance unknown to him. He went to the father alchemist who traced the origin of this scent back to the ‘Garfilum silvestre caprese.’ That water became the first perfume of Capri.”

I have heard that one of the flowers used has the property of preserving the scent of all the others.  What that flower might be, I do not know, but it is a lovely story. 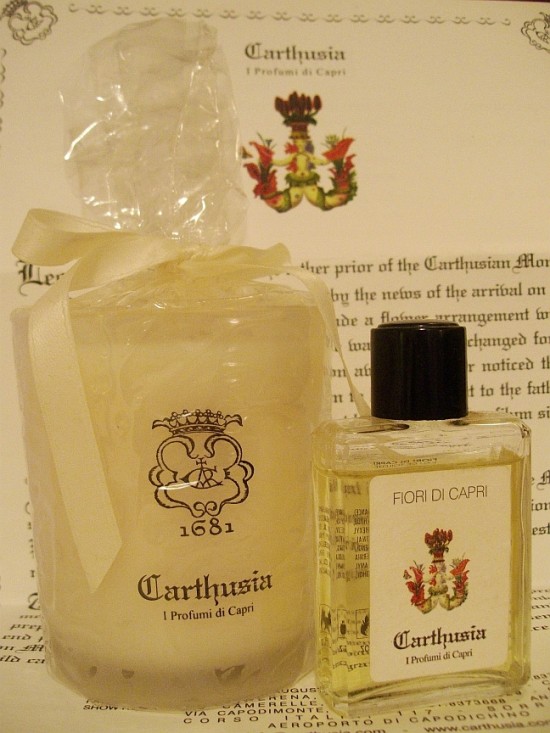 May I never suffer another round of department store-induced gagging and sneezing again!

I am not much of a perfume fan.  I tend much more toward comfort and practicality than stylish fancy.  While we were in Zanzibar, I did buy a few essential oils, but I kept it simple.  In Egypt, we repeatedly declined offers to visit perfume and jewelry shops.  However, I really enjoyed stopping in here.  Probably a big part of it is because I like candles.  It’s one of the places where, in my mind, frilly and and practical overlap in a most aesthetically pleasing manner.

…Oh, ok, and some of it was because the perfume really did smell good – just like flowers!  None of the scary chemical stuff that folks tend to douse themselves in when working in an upscale metropolitan office building.  Hearing the history of the whole deal made me like it better, too.  I am probably a sucker, but that’s ok.  I enjoyed it, and that’s what really matters!

So if you visit Capri, there are 3 ½ things to get you started.  There is much, much more, including scooter rental, swimming, and boat tours.  However, if you only have an afternoon, these are the things I recommend you don’t miss!

Have you been to Capri?

What was your favourite thing to do?