One of the truisms of travel is that experiences that frustrate, irritate, or scare the buhjayzus out of you when they happen turn into the best stories later.  This was one of those times.  Grab a cup of sweetened mint tea, sit back, and have a read.

Rachid and I took a veeery early morning bus from the Middle Atlas mountains that got us to the edge of the Sahara in the early afternoon.  We stopped in Erfoud before continuing to Rissani, the end of the line.  While waiting for our departure, we spied some of our fellow passengers being assisted by some friendly *cough cough* locals. 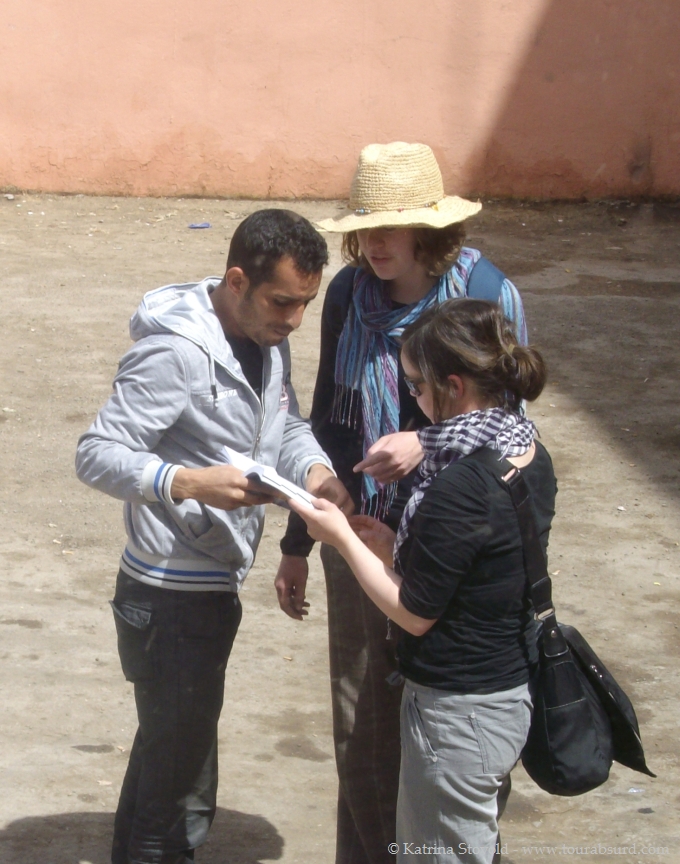 Isn't he a nice young man?

You see, by this point I had absorbed Rachid's cynicism about "false guides."  That is to say, fellows who position themselves around spots frequented by tourists in order to lead them to accommodations, shops, and attractions, usually run by folks who give them money for directing unsuspecting "marks" their way.  There are registered guides, you see, who have standards and legalities to uphold.  These guys, on the other hand, rarely have such compunction.  It's not that I begrudge anyone the right to make a living, far from it.  It's simply that I dislike deceit.

Rachid and I resolved to warn our bus-mates if they got back on and continued to Rissani.  We had to wait, however, as 2 or 3 of the false guides followed them back on board, going for the hard sell.  One spotted me and apparently shouted, "There's another one here!" to a comrade outside.  I know this not because I am an incredibly quick study in the local language, but because Rachid whispered the translation to me as he rolled his eyes.

All but one eventually melted away.  The last fellow was deep into his spiel, telling one of the women, "Your eyes are like the flowers of paradise!"  I shrieked in laughter and disbelief, clapping a hand to my mouth as I realized I'd been a little too loud.  I mean, I didn't want to ruin the magic of the moment!  Who knows?  Maybe she likes being romanced by strange men in bus stations.  Hey — don't judge!

We made it to Rissani a short time later, sans false guides.  By this time we had chatted with Barbara and Ella (not to be confused with Barbarella) and had agreed to split the cost of a taxi out to the hotel.  We scoffed at the taxi prices offered at the bus station and walked the few blocks into town.  There weren't any taxis immediately visible, though a couple showed up fairly quickly.  Some haggling with Rachid, and between the drivers themselves, took place.  Rachid did not look happy with the prospect of getting in the grand taxi of the winner.  We were happy to keep walking, but the guy was persistent.  I could see that Rachid still wasn't happy, but we foolishly got in anyway. 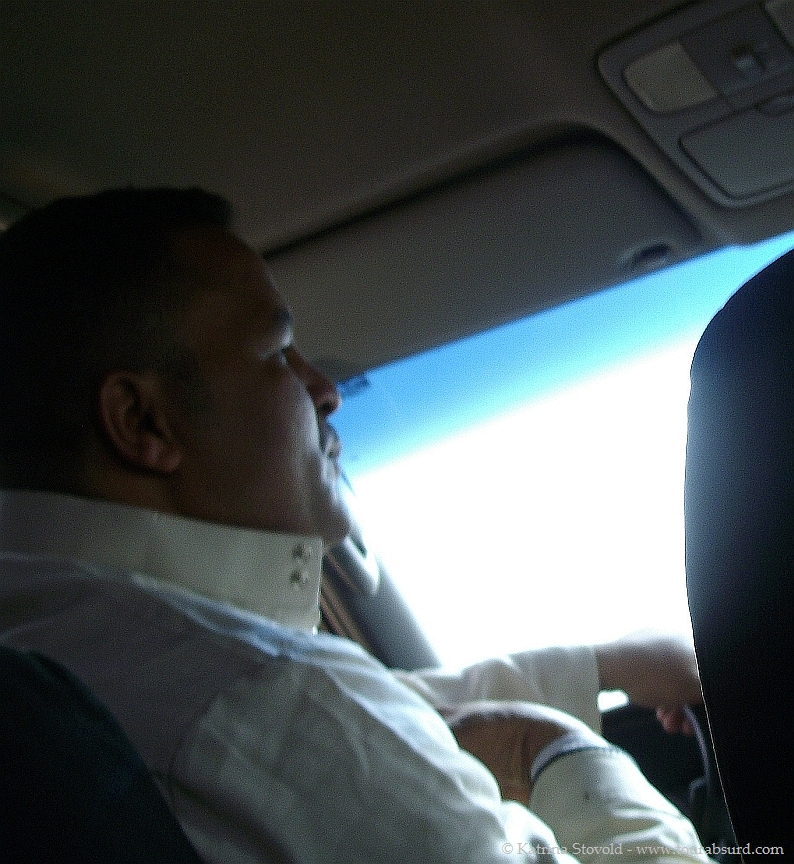 If you see this guy, make the sign against the evil eye and run!

And then…  we were in his clutches!  Rachid sat in front so he could converse and keep an eye on our route; Ella, Barbara, and I sat in the back seat.  In retrospect, I think this may have aggravated the cultural rift.  For us, it was like any other taxi ride, or perhaps a bit of luxury fun, being chauffeured about.  For Evil Driver Guy ("EDG") we were subservient females.

In any case, we told "EDG" where we wanted to go: Auberge Sahara in the town of Hassi Labied (approx. "HAH-see la-BEED").  In all honesty, Rachid and I had not settled on a place.  Rachid just knew of a decent hotel / trekking outfit that he'd been to with Couchsurfers before.  He didn't remember the name, but he knew how to get there from the town.  Ella and Barbara had the name of their place because they'd chosen it from the Lonely Planet guide (listed as "Auberge Camping Sahara").  They were quite clear from the beginning, despite EDG's repeated invitations to visit the hotel of his friend.

I need to back up here and explain that because of all of the "false guides" in Morocco, it is illegal for non-licensed guides to spend time with foreigners.  Despite the fact that, like any true Couchsurfer, Rachid was traveling with me for fun rather than profit, he could get in big trouble with the authorities if caught with me.  It put him in the awkward position of not being able to openly speak out against unscrupulous shop owners or taxi drivers, as they could potentially make a fuss and report him for being a false guide.  The fact that he was not pretending to be a guide matters very little; the appearance alone could have been enough for jail time.

…and so it was that when EDG started getting very rude, aggressive, sexist, and dismissive, with occasional hollow attempts at charm, we all got a bit worried.  We kept insisting that we wanted to go to Auberge Sahara and were not interested in seeing any other hotels.  At one point he stopped the car because, in his mind, Barbara had been rude to insist that we just go where we chose.  Ella and I exchanged glances.  "Uh…" I said, "can we just …go?"  He started driving again.  Only he turned off the road to Hassi Labied too early. 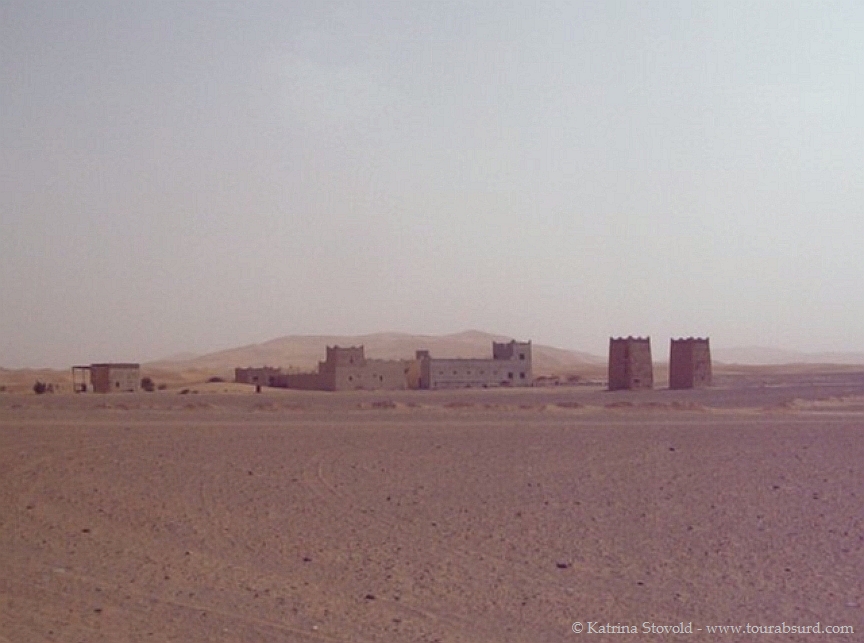 Shot from a video I took out the window of the car.  My last before dying in the desert?

Rachid, constrained from saying or doing anything, looked pissed off in the front seat.  We pulled in at the hotel of EDG's "friend" and looked around.  I figured this was part of the show and as soon as we went through the motions, we'd be free to go.  We went inside for tea with the friend to discuss trekking prices.  The guy was creepy, with that same mix of abusive charm the driver had, and the tea was bad (bad tea?  in Morocco?  how is this possible?!).  Our jaws dropped at the prices he proposed and we tried not to laugh openly.  I kept looking at Rachid to see what his take on the situation was, but he couldn't say anything, even with the driver and the friend out of the room.  In fact, he had to keep telling us with his voice, "This is where I come all the time!" while telling a different story with his eyes and face.

We went back to the car and started to stow our belongings.  I can't even remember what EDG said at that point, but he put on a big show of being angry and said he'd fulfilled his agreement with us and refused to take us anywhere else, the end!  Ella and Barbara were at a bit of a loss and continued trying to be polite.  Not having a lot of patience for b.s., I picked up my pack, announced that I'd had enough of this, and started walking toward the gate.  At the very worst, I figured I'd hoof it to a neighboring hotel and ask them to call a taxi.

Rachid ran after me calling, "But this is where I come all the time!" in a loud voice, but whispering, "Good job!  Keep walking!" when he got close. I guess it worked, because EDG was shamed into starting the car and picking us up.

Did I mention that Barbara is originally from Austria and is a psychologist?  No, I don't think I did.  Well, she is.  So while I was seeing signs of charade and shenanigan-ery – friendly, aggressive, charming, controlling, etc. – in EDG's behavior, she saw SOCIOPATH!  (He wasn't a sociopath, it was just the doctor-filter she saw through at the time).  She kept gently insisting, though with less and less patience, "We just want to go to Hassi Labied!"  Because, you see, the tomfoolery and games had not stopped.  I, too, was growing less patient (if that is possible), but Barbara kept begging politeness from Ella and me.  I didn't realize until later it was because she thought the guy was going to snap.

I must admit, I had sized him up.  Although I now sport a well-rounded and computer jockey-influenced figure, I was once in the Marine Corps.  And one thing I learned in the Marine Corps is to be fierce.  I might not have the brute strength to win an arm wrestling contest with EDG, but I was confident I could do some serious damage.  His misogynistic behavior made it pretty clear he wasn't expecting much resistance, either.  Being misleadingly petite has its advantages.  Yeah, I was pretty sure I could take him.

"We just want to go to Hassi Labied!" became our mantra.

EDG tried pulling in at this hotel, and that hotel, stopping to chat with another driver in the middle of the road, telling us we'd passed the hotel and he wasn't going back, and on and on.  At one hotel, the proprietor — by all accounts a decent man — spoke German.  Barbara explained to him what was happening with our driver from hell.  He listened sympathetically and then firmly instructed EDG to "take them to the Bourchok," meaning the family who owned Auberge Sahara.  After a little more drama, we finally arrived. 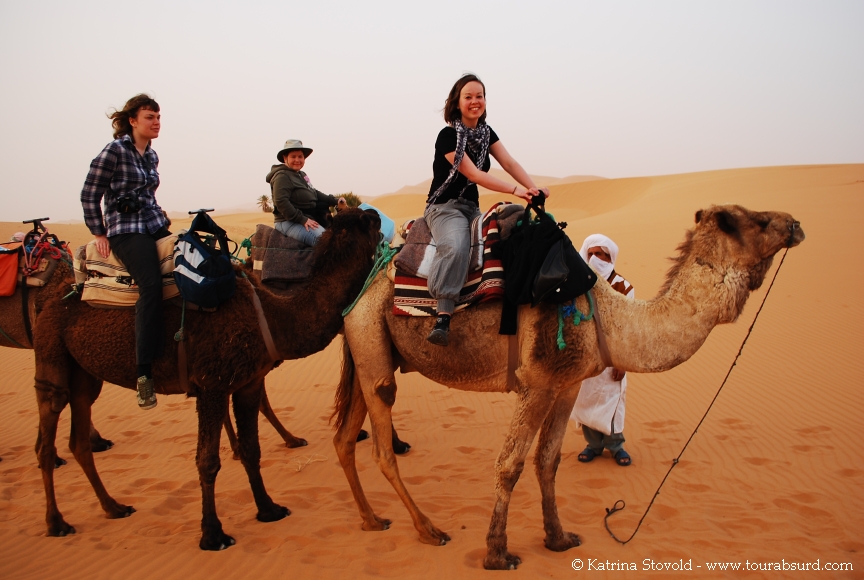 Look!  We are happy!  And smiling!  And sitting on camels!  (Picture taken by Rachid.)

EDG did not come inside the hotel begging for a referral fee.  He knew the owners were aware of his unscrupulous ways and would have chased him out of there immediately, possibly threatening bodily harm.  But wouldn't you know it?  The guy had the gall to suggest that we offer him a tip!  Here's my tip, buddy: don't let the door hit you on the way out.

In a happily serendipitous turn of events, Auberge Sahara was, in fact, the place Rachid had been aiming for.  The real, "but I come here all the time!" place.  And Omar, the gentleman who greeted us and worked out the trekking prices (though he is usually the chef), was polite, professional, and not at all weasely.  Lonely Planet was spot on in recommending this establishment.

At dinner that night, in a big ol' nomad tent out in the dunes, Rachid, Barbara, Ella, and I rehashed the day's adventures.  We laughed and laughed over the repeated pleas of, "We just want to get to Hassi Labied!"  I had an extra bit of fun trying to mimic Barbara's Austrian accent.  This is when I learned she had been expecting Psycho music and stabby knives and whatnot.  I don't think she understood why I wasn't worried about EDG's behavior being anything more than a show. 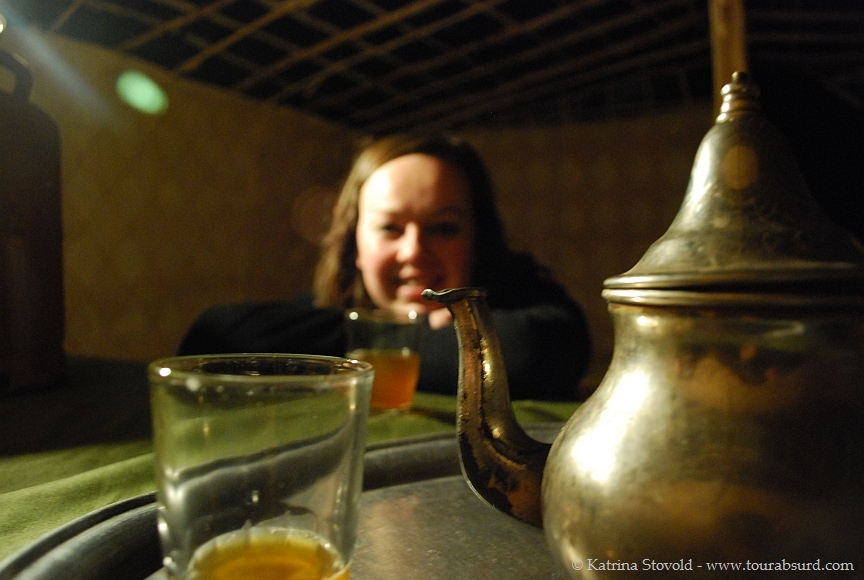 I learned after the trek that the Bourchok brothers are some of the longest established hosts and guides in the Erg Chebbi area.  They are also interested in conservation and protecting the dunes.  In fact, I owe them an article on Examiner.com about the erosion and mistreatment of the environment by less conscientious hotel owners and 4×4 renting outlets.  You know how cool they are?  They turn away business if the caller indicates that they are there to use 4×4's.  How awesome is that?

I also learned that if you call ahead, the hotels will send a taxi to get you.  You'll pay full price and not be able to negotiate much of a deal, but you'll get there without hassle!

The moral of the story: if you have a hotel in mind for your trip to the Sahara, ask them to arrange a taxi for you.  If you can't do that, then at least make sure you pick a driver you can best in a fight.  ;)

What unfun-at-the-time-but-hilarious-later adventures
have you had?

12 thoughts on “We just want to go to Hassi Labied!”