One of the first things that many non-Muslims who visit Muslim countries notice are the frequent calls to prayer, known as the Adnan in Morocco (often called the adhan, as well).  On our first trip to Africa (Tanzania), Dario and I were met at the hotel by a friend who'd arrived the day before.  He warned us to sleep with earplugs or risk being awoken rudely and abruptly before dawn.  (On vacation?  Ack, no!)  Fortunately our room was in a part of the hotel that was a little more …insulated from the joyous morning greeting.  For the rest of the trip we were in hotels, or sometimes huts ( though "hut" is a bit of a misnomer — they had flush toilets), away from population centers, so the issue didn't come up again.

When we traveled to Egypt, we encountered the same thing, but to a much lesser extent.  I think there are so many hotels and visitor areas that much of the sound is absorbed by overfed tourists, like foam insulation in a recording studio.  Only in Aswan, where the air was clear and we had a gorgeous view of the Nile and the town spreading out below the dam (including several minarets), did we really hear anything. 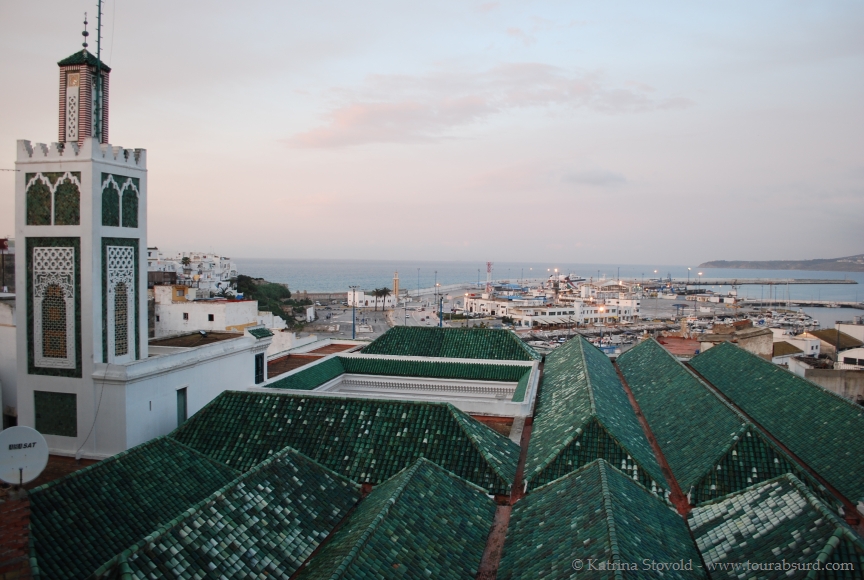 This one is actually far away, relatively speaking. (Rachid's photo.)

Morocco, now…  Morocco is different.  I'm sure some of it was because we were couchsurfing and hostel-ing instead of staying in posh hotels.  It seems that all hostels, everywhere in the country, must get a reduction in rent for being Right Next To Mosque Loudspeakers That Are Aimed At Your Head.  Seriously, there was only one hostel where this did not seem to be the case — one!  I am glad that nomad tents in the desert don't come with their own portable mini-minaret, or it would have been every night.  (Well, ok, every night but the The Horrible Overnight Bus Ride From That Time When Hell Froze Over.  If you ever cross the Atlas Mountains at night, keep your sleeping bag with you and pay extra for the nice coach — trust me.)

Occasionally I would be lulled into a sense of complacency — say, after a night out with fellow Couchsurfers, stuffing myself with tagine and mint tea — and think to myself, "Ah!  I'm finally starting to get into this whole Moroccan thing.  The pace of life here, the culture, the food, the…  zzzzzzz….."  And I would fall asleep.  Sans earplugs. 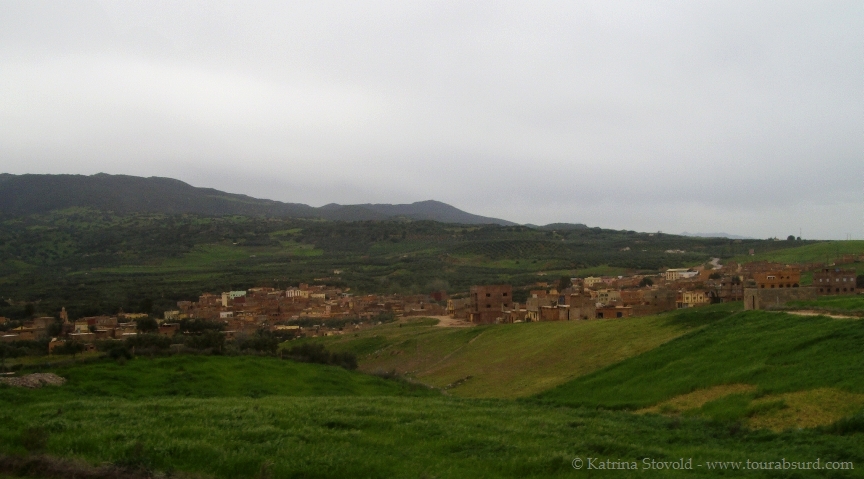 Not where Rachid lives, but close.

When Rachid and I set off to visit his family for a couple of days in the Middle Atlas, I was similarly lulled into thinking that the pastoral scenes meant quiet mornings with birds chirping and flutes playing.

Silly me!  In this tiny town of one automobile and several donkey carts, there are not one, not two, but THREE mosques.  Yes, THREE — and each with their own separate minaret and calls to prayer.  And Rachid's house was, naturally, right next door to one of them. 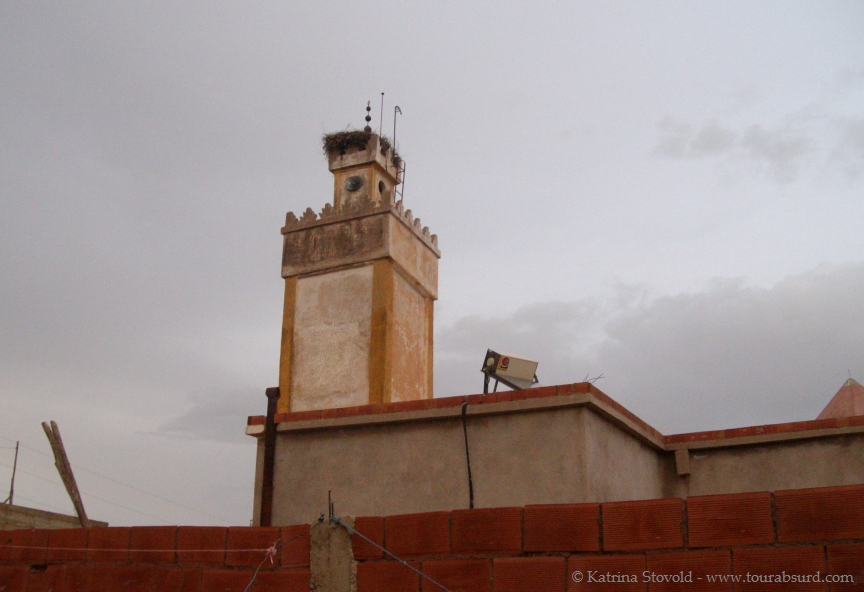 That wall in the foreground?  Rachid's house.  Srsly.  Right. Next. Door.

Rachid tells me that when you grow up with it, you get used to it and are, to an extent, able to tune it out.  I am such a light sleeper that I don't know if I would ever be able to make the adjustment.  It all seemed so harsh and unmelodic.  Not to mention that nearly all the calls I'd heard had been from recordings and played over crackly, low quality loudspeakers.  (My dad owned a stereo shop while I was growing up, and I later worked as a stagehand and film technician, so it's possible this contributed to my bias.)  I suppose I have an unrefined ear in this regard.

Rachid and his sister both told me there was a muezzin from the mosque next door who called evening prayer live vs. using a recording.  They also mentioned that he had a lovely voice, a fact about which many Couchsurfers had remarked.  I smiled and nodded because, although I was intrigued, I was tired and distracted by such practicalities as how to best time my use of the Turkish toilet (it's in the hall near the front door with a shower curtain for privacy; I'm sorry — I was shy!).  We also needed to go out to buy supplies for dinner and figure out sleeping arrangements.  So, discussions about the call to prayer were quickly forgotten.  Until morning, of course. 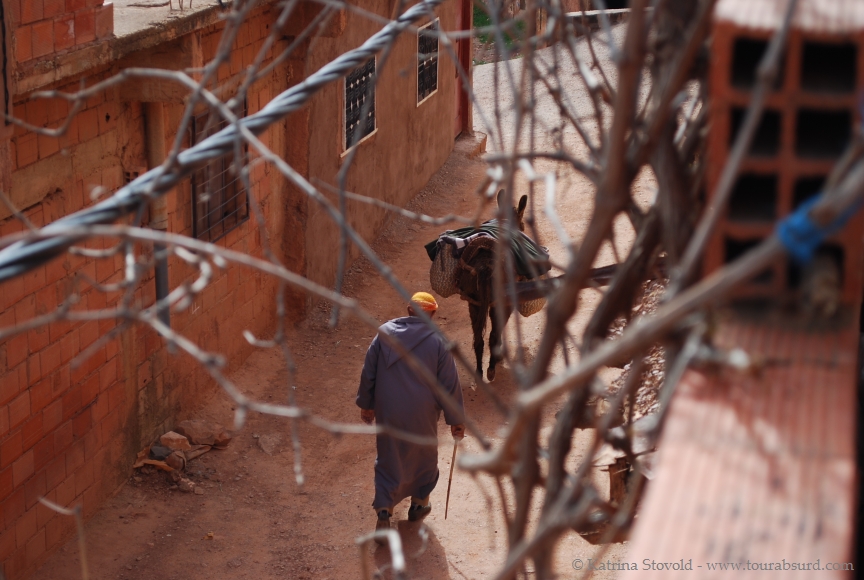 Another view from Rachid's roof.

I had well and truly forgotten about their comments on the muezzin.  The next evening, as I was rummaging through my things, and trying to get organized for an early morning departure, I heard the most incredible sound.  It was a call to prayer that was… melodic.  Amazing!

I quickly grabbed my wee point and shoot camera and set it to record audio.  I wasn't sure how long the prayer would last, so the full clip has sounds of household chatter and me scrambling up the stairs to get to the roof.  There's still a little bit of sound from me, but the quality came out surprisingly well, considering the equipment.

Trouble seeing the video?  Watch it on YouTube: http://youtu.be/L-LG_da1TEA

My friend, Amanda, from Marocmama.com, filled me in on what the words are (now duly added to the video).  Apparently they repeat over and over, though I forgot to ask how many times.  Here is a transliteration of the Arabic:

And here is a translation into English:

She went on to say, "The [bold] part is the shahada – the declaration of faith that every Muslim makes probably at least once a day.  It is also the only thing that is required to repeat in order to become Muslim."

If this is part of what European explorers first noticed about the Arab world, it's no wonder it became a stereotype.  Not out of ignorance so much, but because the sound is striking and beautiful.  There's something about the dedication to and the rituals of faith that I find moving, even if I don't share the belief.  It's part of my philosophy of, "we're all just doing the best we can with the tools we have."  (This extends to all my pagan, agnostic, and atheist friends, too.)

In any case, this Adnan was the standard against which all subsequent calls to prayer would be judged.  It really was amazing to hear.  If you are going to live next door to a mosque, this is the kind of call you want!

ps: there were birds in the area, just not the songbirds and flutes arrangement I'd previously imagined.  Instead, they were giant storks who build nests atop minarets.  ;) 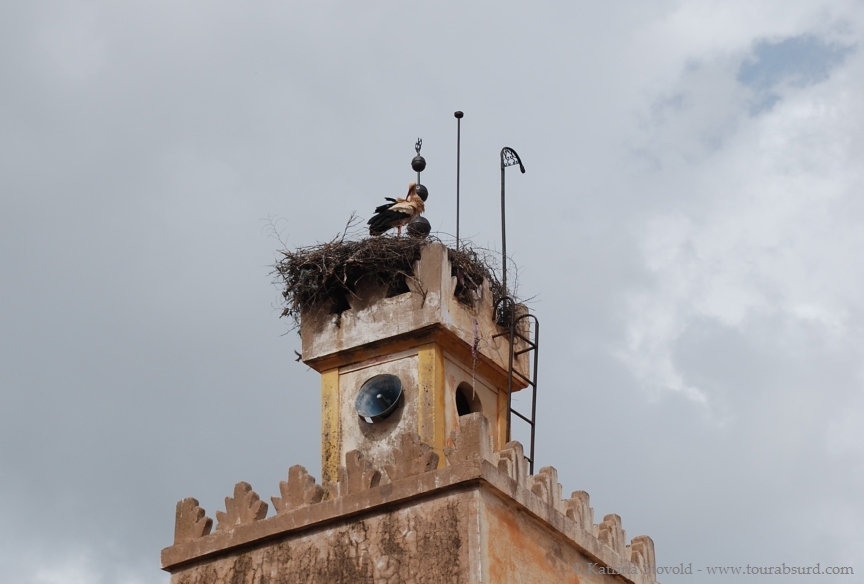 I think people seeking answers is great!  I especially love it when the current paradigm is questioned and weighed against feelings of personal truth and integrity, but that's not everyone's cup of tea.  If you do like that kind of thing, as well as a melange of cultural peeks and tidbits, I highly recommend checking out the BBC's Around the World in 80 Faiths series.  You can find most of the videos on YouTube.